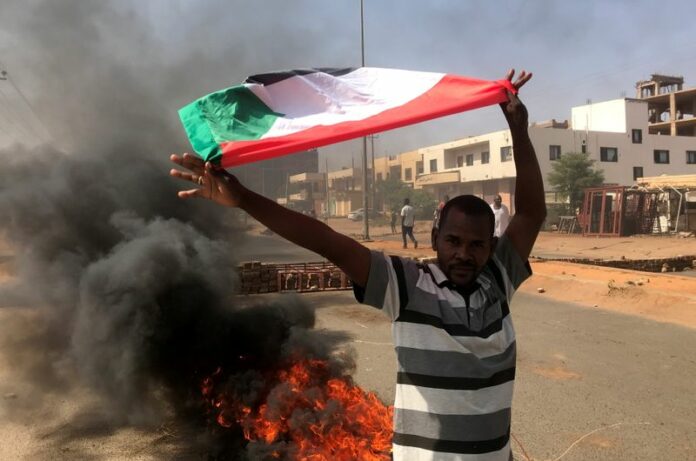 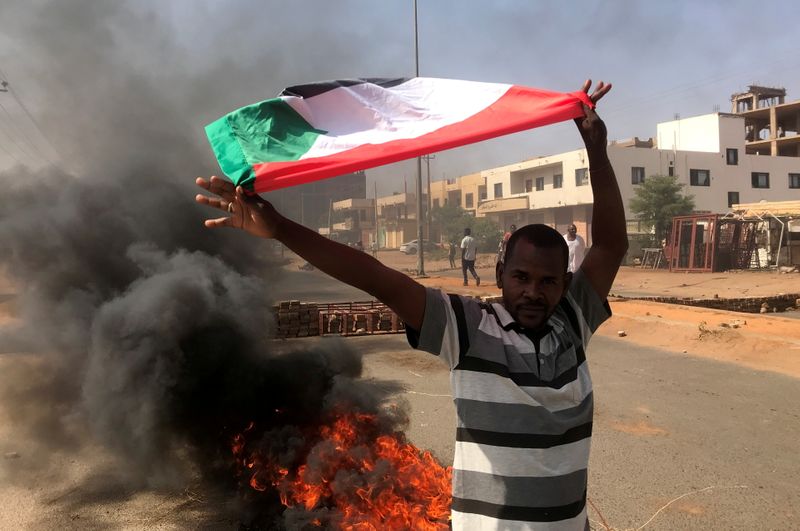 © Reuters. A protester waves a flag during what the information ministry calls a military coup in Khartoum, Sudan, October 25, 2021. REUTERS/Mohamed Nureldin Abdallah

KHARTOUM (Reuters) -State oil company workers and doctors in Sudan said on Wednesday they were joining protests against the military coup that has derailed the country’s planned transition to democracy.

Thousands of people have taken to the streets since Monday’s takeover led by armed forces chief General Abdel Fattah al-Burhan, and several have been killed in clashes with security forces.

A group of neighbourhood committees in the capital Khartoum has announced plans for further protests leading to what it said would be a “march of millions” on Saturday.

In one Khartoum neighbourhood on Wednesday, a Reuters journalist saw soldiers and armed people in civilian clothes removing barricades erected by protesters.

A few hundred metres away, youths came out to build barricades again minutes later. One of them said: “We want civilian rule. We won’t get tired.”

Burhan on Tuesday defended the military’s seizure of power, saying he had ousted the government to avoid civil war.

He has dismissed the joint civilian-military council that had been set up to steer the country to democratic elections following the overthrow of long-ruling autocrat Omar al-Bashir in a popular uprising in April 2019.

Prime Minister Abdalla Hamdok was returned to his home under tight security on Tuesday after being held at Burhan’s house.

Workers at state oil company Sudapet on Wednesday came out in support of the ousted government.

“We announce (we are) joining the civil disobedience in support of the people’s decision backing the civil democratic transformation and until this demand is achieved,” Sudapet said in a statement carried by the Sudanese Professionals Association (SPA), an activist alliance.

Doctors also said they would go on strike.

“As we promised and previously announced we would enter a general strike across Sudan in the event of a coup, we are keeping to our word and timing completely,” the Unified Doctors’ Office, which is made up of different unions, said.

The doctors’ unions were one of the earliest and key driving forces behind the 2019 uprising that brought down Bashir. Other striking groups, including the oil workers and central bank employees, could help bring the country’s economy to a standstill.

Civilian groups have accused the military of scheming for weeks to seize power.

Speaking on Tuesday at his first news conference since announcing the takeover, Burhan said the army had no choice but to sideline politicians who he said were inciting people against the armed forces.

The military’s action did not amount to a coup, he said.

Events in Sudan – Africa’s third largest country – mirror those in several other Arab states where the military tightened its grip following uprisings.

Willow Berridge, a Sudan expert at Newcastle University, said it would be difficult for Burhan and the army to suppress street mobilisation against the takeover because of the presence of resistance committees in many neighbourhoods.

“My greatest fear is that he will fall back even further on the only legitimacy he can depend on – violence. It is a very serious risk,” Berridge said.

Burhan has close ties to states that worked to roll back Islamist influence and contain the impact of the 2011 Arab Spring uprisings, including the United Arab Emirates, Saudi Arabia and Egypt.

While Western countries have denounced the takeover in Sudan — which has a history of military coups — those Arab countries have mainly called for all parties to show restraint.

“They (The Sudanese military) misunderstand the will on the street quite to their detriment. I think they are badly advised by regional powers supportive on this and uneasy by the prospect of transition,” said Jonas Horner of International Crisis Group.

Burhan has also been at the forefront of Sudan’s steps to normalise relations with Israel.

Sharon Bar-Li, deputy director-general for Africa at the Israeli Foreign Ministry, told Kan radio on Tuesday it was still too early to know if developments in Sudan will have consequences for the issue of normalisation.

The African Union has suspended Sudan’s participation in all activities until the restoration of the civilian-led authority it said in a communique dated on Tuesday.

On Tuesday evening, the SPA said it had reports of attacks by “coup forces” on protester sites in Khartoum and other cities. It said they had fired shots and tried to break through barricades.

“Right now, because the military now has power, they have halted the path and taken us back to square one, but that doesn’t work for us,” said Sudanese citizen Mohamed Ali.