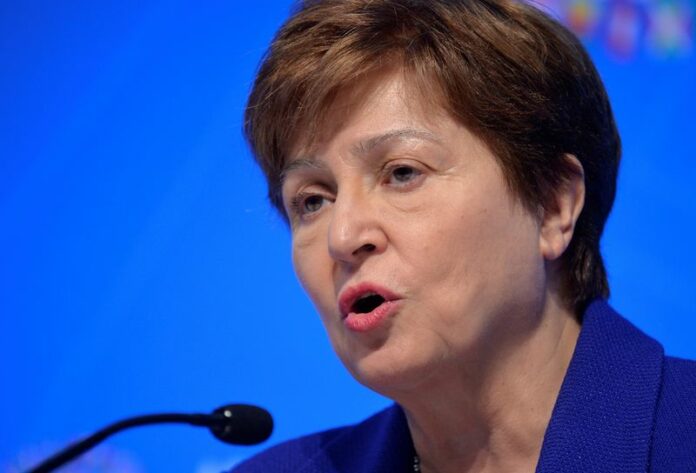 WASHINGTON (Reuters) -The World Bank’s board has turned down a request by IMF Managing Director Kristalina Georgieva for a meeting to defend herself against claims that she pressured staff to alter data as the bank’s CEO in 2017, according to two sources briefed on the situation.

An attorney hired by Georgieva asked for the meeting in a 17-page letter on Friday to the dean of the bank’s board.

The attorney, Whitney Debevoise of Arnold & Porter, wrote that an investigation report prepared by the WilmerHale law firm for the board was improperly conducted, violated Georgieva’s due process rights, and based its fundamental conclusion on a false assumption, according to a copy of the letter viewed by Reuters.

Georgieva has denied the allegations and the board of the International Monetary Fund, which Georgieva has headed since October 2019, this month found no conclusive evidence https://www.reuters.com/business/imf-board-resume-debate-over-georgievas-future-later-monday-2021-10-11 to support accusations of wrongdoing.

The World Bank board told Debevoise it would be inappropriate to meet or hear from Georgieva since it has no role in a separate probe being conducted by WilmerHale about potential wrongdoing by current and former bank staff, including Georgieva, according to a person briefed on the conversation.

That report, expected in about two months, will go to the bank’s human resources department, not the board.

The dean of the board Merza Hasan, the chair of the board’s ethics committee and the head of a separate panel on governance all rejected the request, sources close to the board said.

In a joint response described to Reuters, the three officials told the board they would not be sharing Debevoise’s letter or earlier statements by Georgieva, saying the bank’s rules are intended to prevent “any interference from the board or any other party” in staff investigations, the sources said.

A World Bank spokesperson declined to comment on the latest developments, saying the bank did not comment on investigations.

WilmerHale did not respond to requests for comment on the Debevoise letter. Earlier this month, the firm said its report followed all applicable World Bank rules, and Georgieva had been told the World Bank could disclose any information she provided.

Debevoise is a former member of the World Bank’s board. His retention, together with Georgieva’s demand the World Bank board hear her story, could feed a widening rift between the IMF chief and World Bank officials.

The two development banks together fund tens of billions of dollars in climate, health and anti-poverty programs in poor countries.

World Bank President David Malpass and Georgieva have played a leading role in shaping the global response to the COVID-19 pandemic. Both are due to attend meetings this week of the Group of 20 global economies and a United Nations climate conference.

The World Bank board had been scheduled to meet informally on Monday, but canceled the gathering after Georgieva’s public relations firm sent Debevoise’s letter and other materials to board members. The board will reconvene when all stages of the staff investigation are complete, the sources said.

Georgieva could face sanctions if the second phase of the investigation finds wrongdoing on her part, including a ban on entry to World Bank facilities. She would not lose the pension she collects from the bank, according to bank rules.

The U.S. government, the largest shareholder in both institutions, this month said there was insufficient evidence to remove Georgieva from the IMF helm, but Treasury officials stressed they were keeping close tabs on the ongoing World Bank review.

Both Democratic and Republican lawmakers have raised concerns about Georgieva’s IMF leadership.

On Tuesday, Democratic Senator Robert Menendez told a hearing of the Senate Finance Committee: “She’s lost my confidence and I want to see how she actually can operate under these circumstances.”