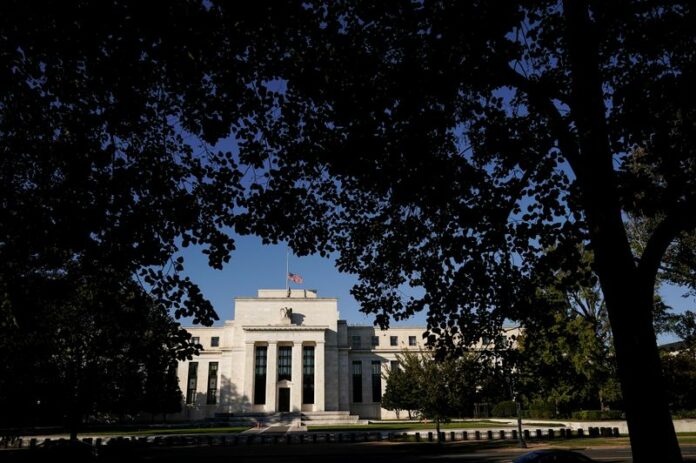 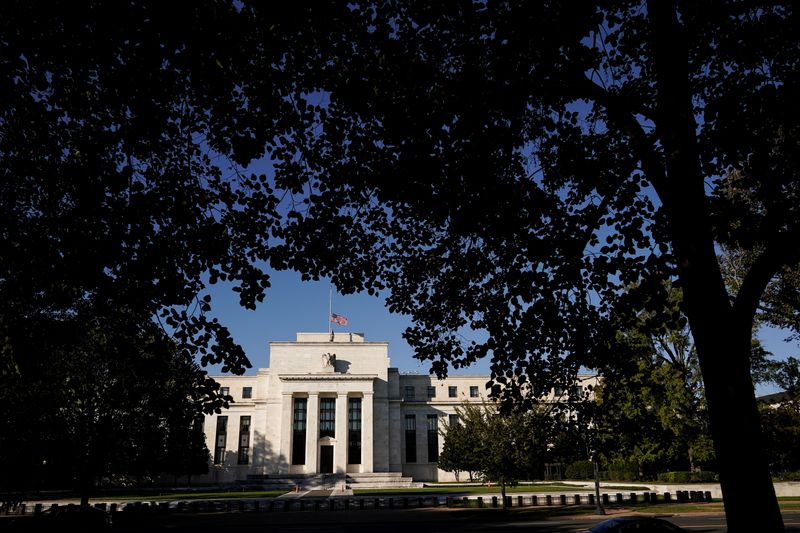 WASHINGTON (Reuters) – Federal Reserve officials face a ticking clock in their ability to ignore high inflation and are now navigating between their own senses of patience and risk, and a U.S. economy stymied by tangled supply chains, slow hiring and strong consumer demand.

The combination of supply bottlenecks and a surge in household incomes fueled by pandemic-related government aid pushed the personal consumption expenditures price index, a key measure of inflation, to a 30-year high on a year-on-year basis in August.

Policymakers still largely expect the pace of price increases to ease without the Fed nudging the process by raising interest rates sooner and higher than expected.

Yet that judgment now hinges on a race, in effect. Will disruptions, such as the 100-ship backup at the Los Angeles-Long Beach port complex in California, disappear before households run out of an estimated $2 trillion in excess savings accumulated during the pandemic? And will that happen before recent price hikes show up in public expectations about future inflation?

The latter may already be starting. A Fed index of inflation expectations tracked by top officials at the U.S. central bank has risen for an unprecedented five straight quarters. At 2.06%, it is above the Fed’s 2% target, and likely rising. Consumer expectations have jumped, too. The Conference Board reported on Tuesday that its 1-year consumer inflation expectations survey for October hit 7.0%, the highest since July 2008.

“Early on, patience was easy,” Fed Governor Randal Quarles said last week https://www.federalreserve.gov/newsevents/speech/quarles20211020a.htm. “The fundamental dilemma that we face … is this: Demand, augmented by unprecedented fiscal stimulus, has been outstripping a temporarily disrupted supply.” Yet the economy’s “fundamental capacity” remains intact, and Fed officials want to keep interest rates low as long as possible to let employment rise.

“Constraining demand now, to bring it into line with a transiently interrupted supply, would be premature,” Quarles said, but “my focus is beginning to turn more fully … to whether inflation begins its descent.”

‘TENSION’ IN THE AIR

The Fed holds a policy meeting next week and is expected to announce plans to phase out its $120 billion in monthly asset purchases by the middle of 2022. Between now and next summer the path of inflation, inflation expectations, and job growth will determine whether the central bank hastens the date for lifting its target interest rate from the current near-zero level.

A year ago, before the arrival of COVID-19 vaccines and at the start of a devastating wave of infections, the prospect of higher borrowing costs seemed years off. Only four Fed policymakers projected the need to raise rates before 2024.

Now, half of the 18 policymakers project a hike in 2022, a move that would come as Democratic President Joe Biden’s administration is financing new spending and likely before employment has returned to pre-pandemic levels. That could complicate Democrats’ efforts to keep control of Congress in the Nov. 8, 2022 elections.

Fed Chair Jerome Powell has noted the emerging “tension” between the central bank’s employment and inflation goals. Fed Vice Chair Richard Clarida, asked in April when he would worry that the Fed’s expectation of “transitory” inflation might be wrong, cited “the end of the year.” Fed Governor Chris Waller last week set the same timeline.

“We seem at an inflection point and the question is whether some of the old problems are coming back to haunt us,” said Peter Ireland, an economics professor at Boston College.

It’s a choice Fed officials hoped to skirt with a new policy framework built to capture job gains they feel were missed in past business cycles when interest rates were raised too soon.

That framework depends on inflation, job markets, and other parts of the economy behaving as they had before. For now at least, the pandemic has put some doubt around that premise.

It’s not just things like a global computer chip shortage, capacity constraints in warehouse construction, or other supply issues that have stretched the Fed’s “transitory” inflation narrative. The behavior of households and elected officials’ actions also cloud the horizon.

The Biden administration’s upcoming spending is unlikely to approach the bulge of 2020 and early 2021, when federal payments increased household incomes despite widespread joblessness. Its projected decline may cool demand.

But some pandemic programs remain, and debate continues over whether to make them permanent or add other social spending and infrastructure projects. Recent research from San Francisco Fed staff https://www.frbsf.org/economic-research/publications/economic-letter/2021/october/is-american-rescue-plan-taking-us-back-to-1960s argued that between the spending already in train and the fact that job vacancies have surged beyond the number of unemployed looking for work, “the economy may already be in a heated state” with inflation heading higher, even if only temporarily.

Other data and surveys point to the same conclusion: that the surge of workers and job growth Fed officials have banked on to boost production and ease price pressures may not materialize, at least not soon.

Job site Indeed found that among those not “urgently” searching for work, the top reasons were the availability of cash buffers or being in a household with a working spouse – possibly implying a slower return to normal if preferences have shifted toward working less. According to a St. Louis Fed study, 2020 saw perhaps 3 million “excess” retirements, which would account for most of those still missing from the labor force.

Fed officials, as a result, seem increasingly open to the uncomfortable possibility that the inflation they thought they had vanquished will prove to have returned more quickly than the jobs and workers their policies were intended to entice back.

“It goes without saying that the Fed feels burned by the last business cycle,” Ethan Harris, global economist at Bank of America (NYSE:BAC), wrote recently. Interest rates were raised, but inflation never reached the Fed’s 2% target and potential job gains were left on the table.

But between possible shifts in household preferences, restructuring because of the pandemic, and some signs inflation expectations may be rising, Harris wrote, “the Fed’s narrative faces challenges along a number of fronts.