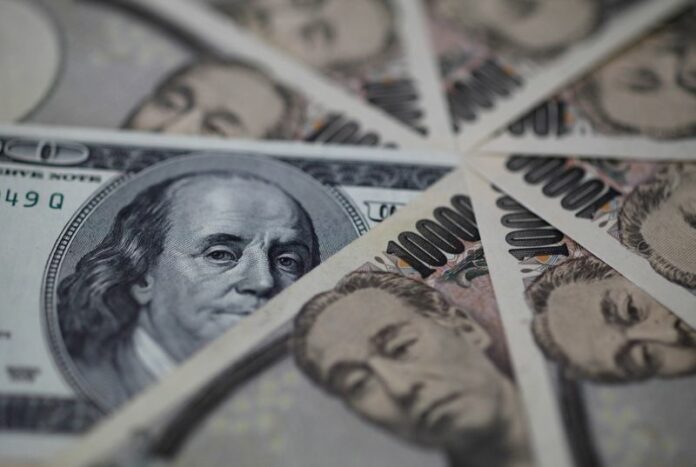 TOKYO (Reuters) – Japanese insurers are growing increasingly reluctant to buy foreign government bonds without a currency hedge, as they are not expecting the recent dollar rally against the yen to continue for much longer.

Only two out of Japan’s top 10 insurers said they planned to increase foreign bonds without a currency hedge between October and March while the others either planned to reduce their overall holdings or keep them steady, according to insurers’ comments made at press conferences and to Reuters in October.

Many insurers also said they preferred investing in corporate bonds, which offer higher returns than sovereign ones, or in local yen bonds as they seek to meet regulatory requirements.

“We are cautious on unhedged foreign bonds. The yen has already weakened considerably. We are not increasing their holdings when the yen is at current levels,” Hiroyuki Nomura, head of investment planning at Japan Post Insurance told reporters during a news conference on Wednesday.

The dollar hit a four-year high against the Japanese currency at 114.695 yen on Oct. 20, as rising U.S. inflation has fuelled expectations of an earlier-than-expected Federal Reserve rate hike, while the Bank of Japan looks poised to keep interest rates low for some time.

A rising import bill, driven by soaring energy prices, has also weighed on the yen in recent weeks, while the currency has also come under pressure from slowing export growth, as automakers curb production due to supply shortages.

Industry leader Nippon Life expects the dollar to slip back to around 108 yen by March from 114 yen currently, voicing scepticism on rising expectations of a U.S. rate hike next year.

Federal Reserve Chair Jerome Powell said last week the U.S. central bank should start the process of reducing its support of the economy by cutting back on its asset purchases, but should not yet touch the interest rate dial.

Fukoku Life, which had a considerable exposure to the dollar many years ago when it was way below 100 yen, will take out currency hedges on all of its foreign bond investment because it thinks the current dollar level is a bit expensive, said the company’s investment planning manager Yoshiyuki Suzuki.

Japanese life insurers collectively manage 412 trillion yen ($3.61 trillion) of assets and have been big investors in foreign bonds for years.

But they became a net seller of foreign bonds in the financial year to March 2021 for the first time in seven years, after having purchased 20.5 trillion yen in the preceding six years.

Many of Japan’s top insurers said they have limited appetite for foreign government bonds, even with currency hedges, given the low returns on offer.

Instead, most insurers are buying higher-yielding corporate debt, even though the extra return they offer compared with equivalent U.S. government bonds has fallen to near record lows.

The yield spread on Bank of America (NYSE:BAC)’s investment grade corporate bond index over Treasuries shrank to 1.07% this week, the tightest spread since 2018, compared with a peak of 4.28% in March 2020, at the height of the pandemic-driven market troubles.

“The global low interest rate environment will likely continue, which means investors will have strong needs for yield enhancement. So we feel demand for credit products will remain strong,” said Akifumi Kai, general manager of investment planning at Dai-ichi Life.

Many Japanese insurers also plan to increase yen bonds, in part to meet regulatory requirements before the introduction of new solvency rules in 2025, even though the 10-year JGB yield is stuck near 0% due to the Bank of Japan’s policy to peg it around that level.