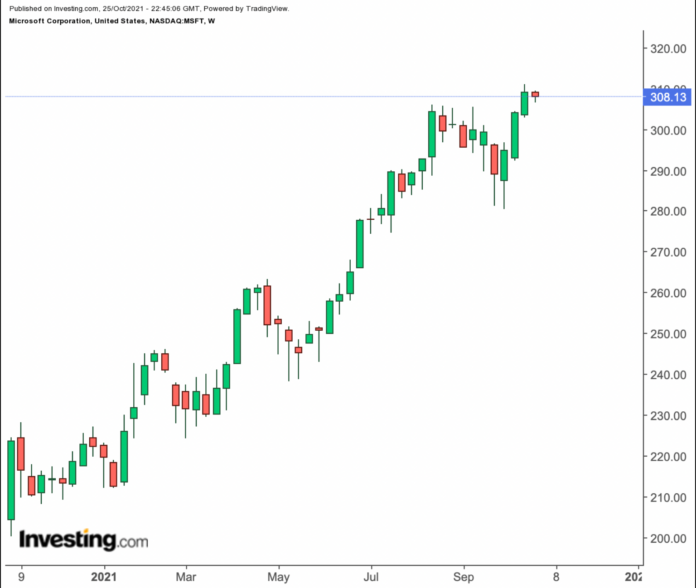 When Microsoft (NASDAQ:MSFT) releases its latest earnings report this evening, investors expect another strong quarter, helped by the powerful growth in the tech behemoth’s cloud-computing business.

In anticipation of such an outcome, they’ve pushed Microsoft shares about 38% higher this year, after a 40% rally in 2020. And there is little in the way that could stop the tech giant from producing another blowout quarter. In its most recent report, MSFT posted sales and profit that exceeded analyst estimates for a 10th straight quarter, showing that CEO Satya Nadella’s strategy to make Microsoft the largest cloud-computing provider remains on track. In addition, the pandemic has fueled added demand for the company’s communication tools and other services.

Millions of workers and students continue to use the company’s meeting software, Teams, to remain in touch and connected. Teams, the Microsoft product that competes with the Salesforce.com-owned Slack Technologies (NYSE:CRM) platform, reached 250 million monthly active users in July, a huge jump from the 145 million the company reported in April.

With that shift, Microsoft is likely to report further expansion in its margins after it announced it planned to hike the prices of certain Office 365 productivity software subscriptions for businesses in August.

The price of one type of subscription, the premium Office 365 E5, is increasing by 9% per user per month starting Mar. 1, while the cost of the more affordable Office 365 E1 will go up by 25%.

Commercial subscriptions to Office 365 represented about 18% of Microsoft’s revenue in the fiscal year that ended June 30. According to analysts’ estimates, the move will add $5 billion to the company’s revenue by 2022.

Still, the relentless rally over the past five years, that has sent Microsoft stock—which closed on Monday at $308.13—soaring almost 400% higher, likely makes investors wonder, has the stock become too expensive to buy?

According to the note:

Due to this strong growth potential, the majority of analysts don’t see a problem assigning a buy rating to MSFT, even at these record high levels. Of 40 analysts polled by Investing.com who cover Microsoft, 37 have an outperform rating on the stock, with the 12-month price target of $338.90. Microsoft’s earnings release later today will show that the company remains in a strong growth phase due to higher demand for its products and services, even in the post-pandemic environment. Though its cloud business had been doing well pre-COVID, the pandemic actually supercharged its growth, spurring more and more entities to shift to cloud infrastructure.