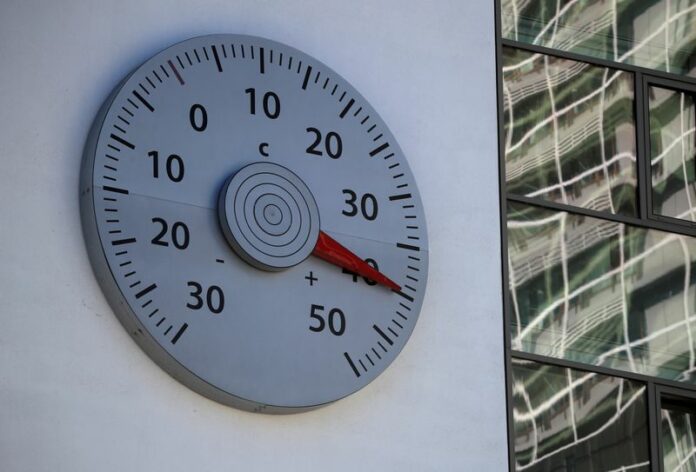 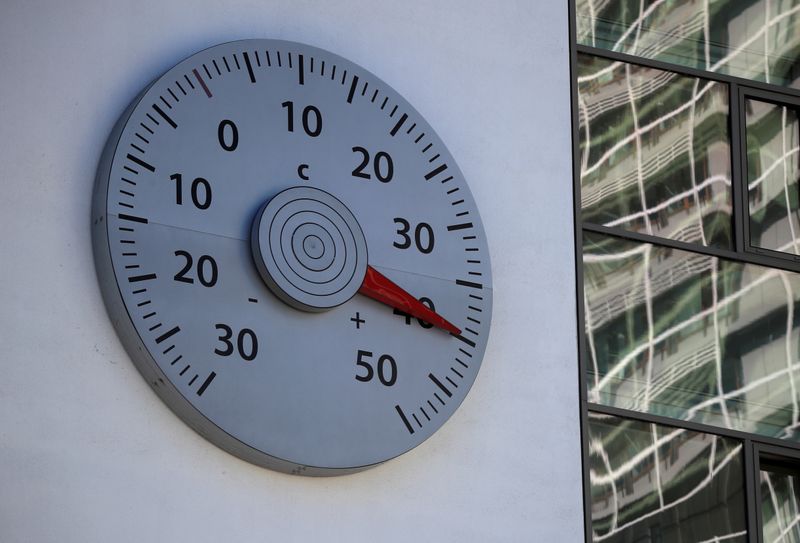 © Reuters. FILE PHOTO: A thermometer mounted on a wall of the headquarters of the United Nations Framework Convention on Climate Change (UNFCCC) shows a temperature of 40 Celsius degrees in Bonn, Germany July 31, 2020. REUTERS/Wolfgang Rattay

BRUSSELS (Reuters) – A majority of European Union citizens think their government will fail to tackle climate change, which Europeans view as the biggest challenge facing humanity this century, a survey published by the European Investment Bank on Wednesday showed.

Of 27,700 survey respondents in the EU’s 27 countries, 58% said they believed their country would fail to drastically reduce its CO2 emissions by 2050, the EIB’s climate survey found.

EU citizens’ lack of faith in their governments’ climate credentials contrasted with their own support for tougher policies.

In the poll, 70% of EU respondents said they supported measures that impose changes on people’s behaviour to tackle emissions.

A large majority, 87% of respondents, were either “completely” or “somewhat” in favour of replacing short-haul flights with trains, while 69% said they supported a tax on the most polluting products.

“In the run-up to COP26, these demands from the public are a clear mandate for us to strengthen our efforts and accelerate the green transition,” EIB Vice-President Ambroise Fayolle said, referring to the U.N. climate summit in Scotland, which begins on Sunday.

Meanwhile, 81% of EU citizens agreed climate change was the biggest challenge humanity faces this century, and 75% said they were more concerned about the climate crisis than their governments.

The EIB poll was conducted in August and September, after devastating wildfires and fatal floods underlined the realities of climate change for many Europeans.

The EU’s climate targets are among the most ambitious of the world’s biggest economies. The bloc has legally committed to reduce its net emissions to zero by 2050 and rapidly reduce them this decade.

EU policymakers are negotiating new measures to deliver its climate goals, including higher taxes on polluting fuels and a new carbon market – proposals facing resistance from some countries that fear a public backlash to measures that would increase costs for households.