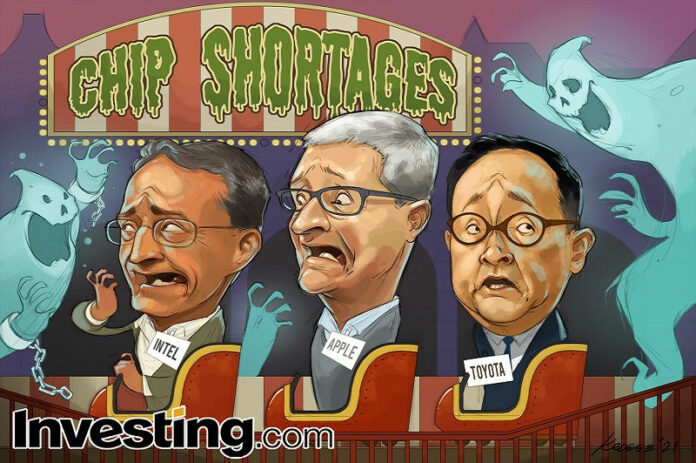 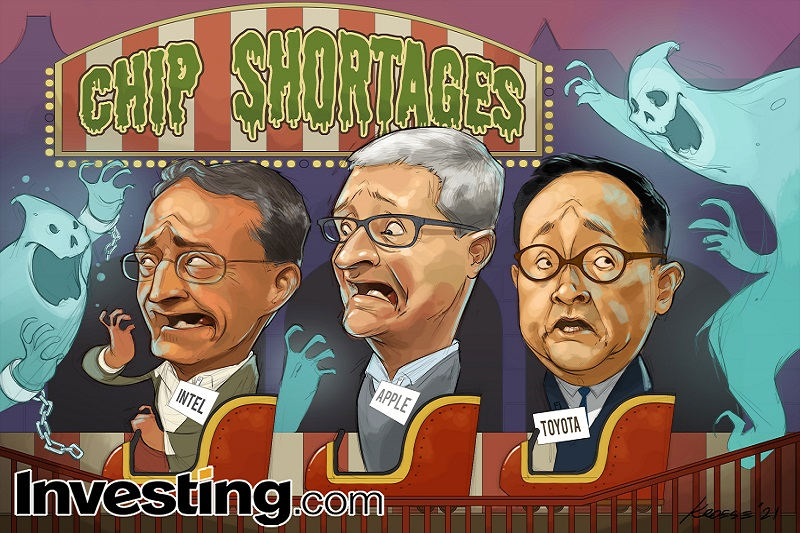 Investing.com — Want to scare people at the Hallowe’en party this year? Trying going dressed up as that scariest of all things right now – a global supply chain.

But first, a spoiler alert: you are going to have to make this costume yourself. The factory in Vietnam that makes it only just reopened after months of lockdown, and even if you could get it knocked up in Ho Chi Minh City, the ship carrying it would have to get in line behind over 70 others currently docked outside Long Beach port, waiting to unload over $26 billion worth of cargo.

The congestion at U.S. ports is a good reminder that what is often termed a supply chain crisis is at least partly a demand issue: U.S. imports hit a record $287 billion in September, 8% above their Trump-era peak in 2018. Retailers and manufacturers alike known for months that the coming holiday season would be a huge challenge, and have raced to get their orders in early accordingly.
All this has happened at a time of lingering Covid-19-related workplace restrictions and sporadic lockdowns in China. No wonder the system is creaking.

Supply chains have been throwing out genuinely scary news in and ahead of the ongoing earnings season. Companies from Toyota (T:7203) to Kimberly-Clark (NYSE:KMB) and Whirlpool (NYSE:WHR) have stretched out their forecasts for how long their sector will be hurt by shortages of labor of components.

What had appeared a brief, if dramatic quirk of the post-pandemic landscape has morphed into something more general and menacing.

As the world’s central bankers and Finance Ministers huddled earlier this month at the International Monetary Fund’s annual meeting, the general realization that what was expected to be a spike in prices is starting to look like a plateau – at least in some countries and for some products.

“What this all means, in all our countries, is that inflation – measures of inflation – are probably going to take a little longer to come back down,” Bank of Canada Governor Tiff Macklem summed up.
At the end of September, a report claimed Apple (NASDAQ:AAPL) is reportedly planning to cut shipments of its new iPhone 13 series due to an inability to source key parts. That served as a wake-up call to all those who had dismissed the chip shortage in general as something that only hurt lower-paying, lower-tech customers were suffering from.

Last week, Snap (NYSE:SNAP) – the parent company of social media company Snapchat – warned that advertisers had cut their budgets, illustrating that even social media companies and other fancy software-based companies live, ultimately, on the same food chain as manufacturers and retailers.

Even chipmakers are blaming global chip shortages for weak sales. Intel (NASDAQ:INTC) said last week it missed sales targets because the gadget makers who buy its chips had ordered fewer – because they were missing semiconductors from other companies needed to make their finished product, a concept Intel memorably summed up as “notebook ecosystem constraints.”

Semiconductors, increasingly embedded into almost every aspect of both manufacturing and services, remain at the heart of the problem. And while there is no unanimity on how long the shortages will last, the trend has been unmistakably toward longer time horizons. Full-throttle stimulus policies have ensured that demand for goods has held up better than many had expected, even as lockdown restrictions were eased and consumers regained the freedom to spend on services again.

Which puts the focus back on the supply side of the equation. It takes time to build a chip factory. And manufacturers – especially those vulnerable to undercutting by China – agonize over laying out billions up front to build factories that may not be fully utilized.

However, geopolitics – in the form of increasingly muscular U.S. trade policy toward China – has given the industry a degree of comfort on that front. Dutch-based ASML (AS:ASML), the only company in the world to make the $150 million lithography machines capable of printing the smallest and most powerful chips, is withholding such machines from China under U.S. diplomatic pressure.

The fruits of that are now starting to be seen from Arizona and Texas to Japan. Intel alone plans to build two new fabrication plants, for $20 billion. Samsung (KS:005930) is close to agreeing to build a new plant in Texas. Taiwan Semiconductor Manufacturing (NYSE:TSM), the world’s largest contract chip manufacturer, is expected to sign up to build a big new plant in Japan.

All these projects take time. Samsung only expects any new plant to be operational in 2024. Intel CEO Pat Gelsinger has said he expects shortages to last all through 2023. But ultimately, such a synchronized expansion of capacity can mean only one thing: the chip industry, which has always been intensely cyclical, will remain so, despite its secular growth outlook.

Sooner or later, supply will not only meet demand but exceed it (most likely when western central banks start raising interest rates to bring inflation under control). The peak may not be there yet, but it will be visible soon enough.