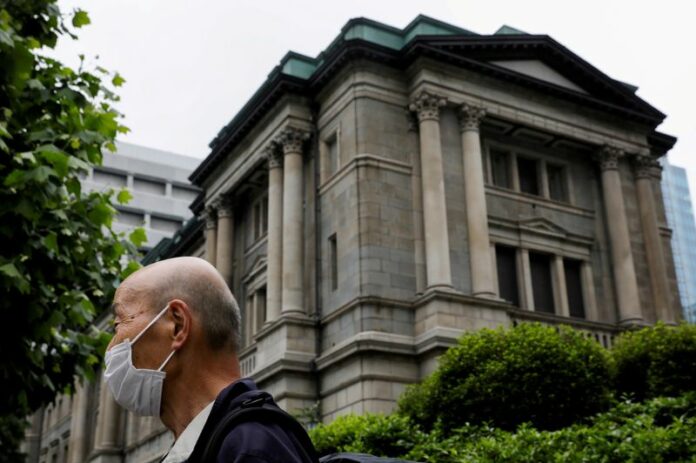 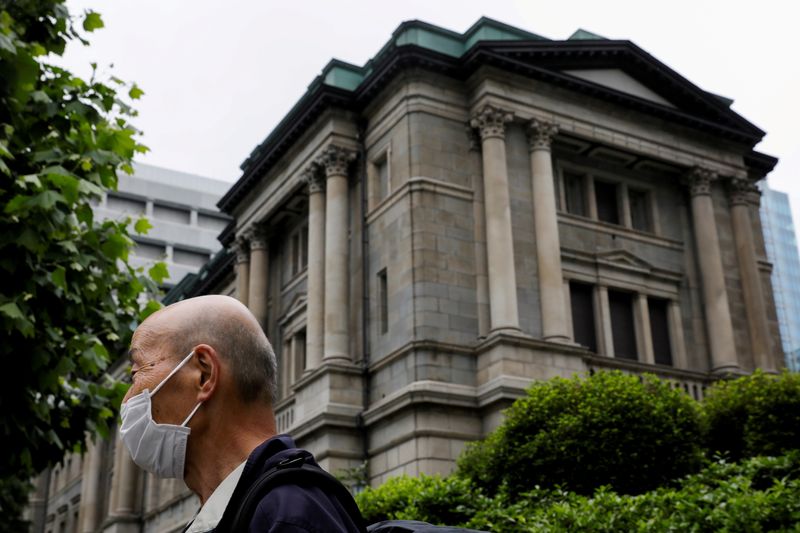 © Reuters. FILE PHOTO: A man stands in front of the headquarters of Bank of Japan in Tokyo, Japan, May 22, 2020. REUTERS/Kim Kyung-Hoon/File Photo

TOKYO (Reuters) -Bank of Japan policymakers debated the fate of a pandemic-relief loan scheme at their September meeting, with one of them proposing phasing it out when the economic impact of the COVID-19 crisis subsides, minutes of the meeting showed.

Members agreed the BOJ must maintain its ultra-easy monetary policy to support a fragile economy, even as other central banks begin to whittle down stimulus in response to rising inflation, according to the minutes released on Tuesday.

Some in the nine-member board also stressed the need to keep supporting companies with an emergency pandemic-relief loan scheme set up last year, it said.

One member, however, appeared to favour phasing out the programme when it reaches the current deadline of March 2022.

“If the economic impact of the pandemic begins to ease, the BOJ must phase out the programme. But that will be a decision requiring caution,” the member was quoted as saying.

With the pandemic still weighing on service-sector activity, markets have anticipated a third extension to the scheme.

But sources have told Reuters the BOJ is discussing phasing out the loan programme if infections continue to dwindle, potentially setting the bank up to exit a key crisis-mode policy sooner than investors expect.

The BOJ is likely to reach a decision on the programme as early as its policy meeting in December.

On Japan’s economy, the board shared the view it was likely to improve but some pointed to risks.

“Supply constraints are taking longer to fix than what companies had expected. Given how the auto industry affects many sectors in Japan, the negative impact could become bigger than expected,” one member said.

A few others also said big output cuts among carmakers could have hurt Japan’s economy more than expected by prodding firms to put off capital expenditure, the minutes showed.

At the September meeting, the BOJ kept monetary policy steady but offered a bleaker view on exports and output as Asian factory shutdowns caused supply bottlenecks.