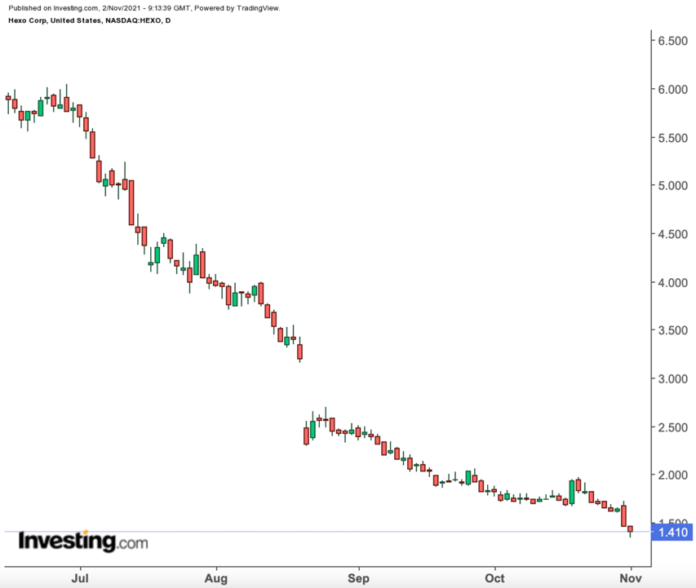 The news just goes from bad to worse at HEXO (NASDAQ:HEXO) (TSX:HEXO). Shares of the cannabis grower continued to slide Monday, after the company took a devastating body blow at the end of last week. The Canadian-based marijuana company saw its shares drop almost 11% on the NASDAQ last Friday after it admitted growing concern about its debt when it reported its fourth-quarter earnings.

The pace at which investors are bailing on the company has increased in the last week causing a serious uptick in intensity at which the cannabis grower is losing its market cap. Since April, it has seen its share price drop steadily. At its 2021 peak in February, HEXO was trading at $8.05. It closed yesterday at $1.40, an 82.6% slide.

The latest concern that has triggered the company’s share price decline is its rapid expansion moves and the debt HEXO has taken on in the process.

In May, HEXO raised US$327.6 million (CAD$405.6 million) through secured convertible notes, using its own assets as collateral. This puts the company’s total convertible debt at US $404 million (CAD$501 million) and $715 million (CAD$886.8 million) in total liabilities to lenders, according to a report by BNN Bloomberg.

The convertible notes issued in May were used to purchase three cannabis companies—Redecan, Zenabis and 48North earlier this year.

In a call with analysts last Friday, according to the report, HEXO’s Chief Financial Officer Trent MacDonald said:

“We understand the risks it now poses and we’re taking it very seriously. So, we’re actively working to address that issue and as soon as we have a material update on that we will absolutely notify our shareholders.”

But debt is not the only concern for the company. HEXO also disclosed last Friday what it termed “material weaknesses” in its financial disclosures. Those weaknesses, which the company has already begun to address, “could result in misstatements.”

In a statement last Friday, the company told shareholders its cash flow will not cover future debt payments and will be seeking avenues to access new financing.

“The company has sufficient funding for ongoing working capital requirements, however, current funds on hand, combined with operational cash flows, are not sufficient to also support funding potential cash requirements under the Senior Secured Convertible Note, investments required to continue to develop cultivation and distribution infrastructure, and the future growth plans of the company. Management is exploring several options to secure the necessary financing, which could include the issuance of new public or private equity or debt instruments, supplemented with operating cash inflows from operations.”

Auditors, according to a report in the Globe and Mail, raised a going-concern warning that highlighted the company’s cash flows would not be sufficient to cover its repayment obligations.

The company still claims 13% of the recreational cannabis market in Canada, the largest share, ahead of Tilray (NASDAQ:TLRY) (TSX:TLRY) and Canopy Growth (NASDAQ:CGC) (TSX:WEED) .

HEXO also recently expanded its US operations, acquiring a 50,000-square-foot growing facility in Colorado. That deal closed at the end of June.