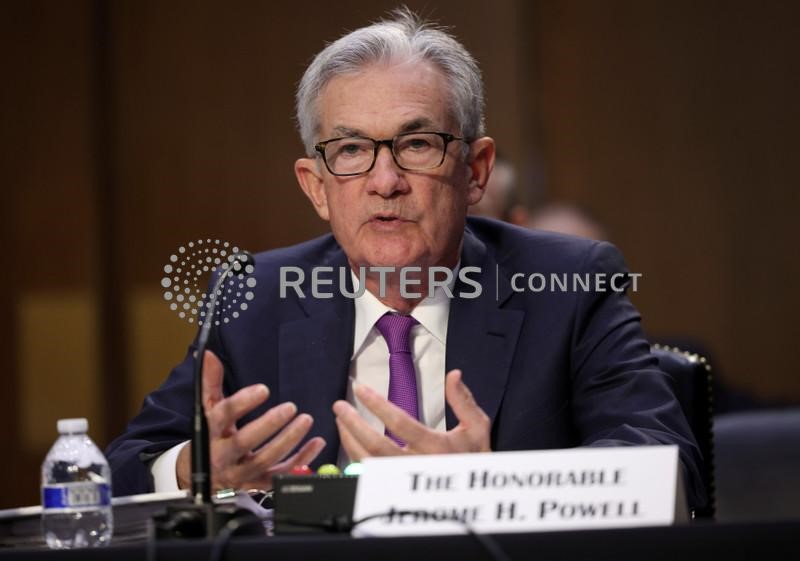 (Reuters) -As the U.S. Federal Reserve gears up to taper its huge asset purchases, investors reeling from gyrations in the bond market are scanning the road ahead for signs of how effectively the central bank can tighten policy to deal with stubbornly high inflation.

At their meeting this week, Fed policymakers are expected to give the green light to reducing the central bank’s bond purchases which have seen it hoover up $120 billion a month in government-backed bonds in a bid to steady the economy after the hit from the pandemic.

The move, which is anticipated to commence in mid-November or mid-December, has been widely telegraphed. Still, the Treasury market has churned over the past week as investors positioned for tighter policy. Investors have sharply increased expectations that inflation would force the Fed to raise rates sooner and faster than projected. Short-term rates have risen and the yield curve flattened.

“Once you get by the taper the next big event is if-and-when the Fed does look to actually tighten going forward, and that puts more importance on effectively every major economic data point that comes out,” said Chuck Tomes, associate portfolio manager at Manulife Asset Management in Boston. “There could be more volatility events around all of those major economic data points.”

Wall Street banks, meanwhile, are intensifying preparations for tapering to ensure they are able to handle spikes in market volatility.

There could still be surprises. Not tapering at this point could substantially steepen the U.S. Treasury yield curve, while a faster-than-expected tapering program would lead to a substantial flattening, according to Steve Bartolini, portfolio manager for U.S. core bond strategy at T. Rowe Price.

The Fed’s communication this time around stands in contrast to 2013 when bond yields rose dramatically during the so-called “taper tantrum” after then-Fed chief Ben Bernanke unexpectedly told lawmakers the central bank could slow its pace of asset purchases that had been propping up markets. Benchmark 10-year U.S. Treasury yields rose from around 2% in May 2013 https://www.reuters.com/article/us-usa-fed-2013-timeline/key-events-for-the-fed-in-2013-the-year-of-the-taper-tantrum-idUSKCN1P52A8 to around 3% in December.

While the move is not as extreme so far, the U.S. bond market is on track for its first annual loss since 2013.

Investors are keenly focused on rising inflation and look to the Fed meeting to see if Chair Jerome Powell’s stance that higher prices will moderate on their own over time may be wavering.

“It’s the labor, the inflation, it’s the consumer that we are mostly concerned about,” said Tom Martin, senior portfolio manager at Globalt Investments in Atlanta, who thinks that long-term bond yields may fall once the taper announcement is made as rising short-term borrowing costs act as a headwind to growth.

“We are concerned that the central bank could make a policy error and raise rates sooner than they should,” said Martin, who said he’s been “positioned for interest rates to not rise for quite some time and we stand by that positioning.”

Stephen Tally, chief operating officer at Leo Wealth, said the risk was “inflation is not as transitory as we’ve been led to believe” and that “pushes the Fed farther and faster than they want to go.”

Inflation expectations spiked last week with 5- and 10-year breakeven inflation rates hitting their highest levels in more than a decade.

“Where it’s going to be more dicey is how (Powell) dances with the word transitory and puts a definition around that maybe in terms of a time frame,” said Lon Erickson, a portfolio manager at Thornburg Investment Management.

“I think you still need to be heavily invested in TIPS and anything that offers some inflation protection,” Doty said.

Powell, whose uncertain renomination as Fed chair has also played into market moves, puts rate hikes in a separate box from tapering, with higher interest rates dependent on a return to full employment and inflation reaching the Fed’s 2% goal, while moderately exceeding that level for some time.

Investors have been closely watching monthly jobs reports, with October’s due Friday.

“After a pretty weak September number are they relying on that October number before they start to really get deep into discussions around rate hikes?,” said Jason England, global bonds portfolio manager at Janus Henderson Investors.