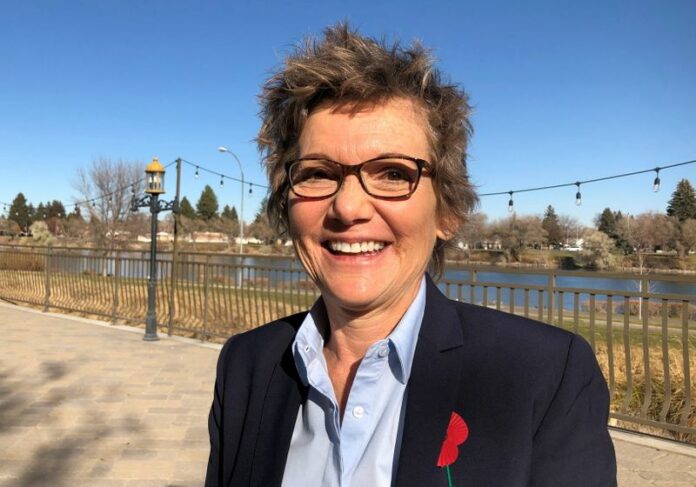 By Ann Saphir and Jonnelle Marte

(Reuters) – A public debate among Federal Reserve policymakers over how to respond to high inflation intensified on Tuesday, even as U.S. President Joe Biden neared a decision about who will lead the central bank for the next four years.

Biden, who is weighing whether to keep Jerome Powell as Fed chair for another term or elevate Fed Governor Lael Brainard to the post, said Tuesday he would make the final call in about four days.

As if to illustrate the challenges that either leader would face in crafting a policy consensus, San Francisco Federal Reserve Bank President Mary Daly on Tuesday called for central bank patience, saying price pressures will likely fade on their own as the pandemic recedes.

“Reacting in response to things that aren’t likely to last will move us farther from — not closer to — our goals,” Daly told the Commonwealth Club of California.

Raising interest rates now would not fix the supply chain bottlenecks and other temporary issues that are pushing up prices, she said, but would slow job creation and the recovery.

Daly, who votes this year on Fed policy, said that uncertainty about how long the pandemic will continue to disrupt the economy makes it difficult to predict how long high inflation will last and how quickly workers sidelined by COVID concerns will return to the labor force.

“Over the next several quarters, as tapering occurs, we will watch how the economy does and see whether inflation eases and workers come back,” she said. “As we get a clearer signal, we will be ready to act accordingly, continuing to provide or remove support as needed to ensure the economy settles at a sustainable place.”

Earlier on Tuesday, St. Louis Fed President James Bullard took the opposite tack, urging a quicker end to the Fed’s asset purchases to put the Fed in position to raise rates as soon as next spring. The Fed began phasing out its bond-buying this month and expects to end purchases altogether by mid-2022.

Its next policy-setting meeting is in mid-December.

The Fed, Bullard said Tuesday, should “tack in a more hawkish direction” over its next couple of meetings to be prepared in case inflation does not ease.

Bullard will be a voter next year on Fed policy.

U.S. retail sales surged in October, government data Tuesday showed, as Americans started their holiday shopping early to avoid shortages of some goods because of the ongoing pandemic. Meanwhile manufacturing output rose last month to its highest level since March 2019, data from the Fed showed.

At the same time, with inflation rising at its fastest in decades and well above the Fed’s 2% goal, consumer sentiment is down to a “level that you might associate with a recession,” Richmond Fed President Thomas Barkin noted Tuesday.

“I think that’s very much because of the impact that prices have on people,” including those who spend a significant part of their pay on food and gas, Barkin said.

“That’s one of the reasons why, you know, I think you’ve heard from all of us concerns about the higher levels of inflation that we’ve seen recently and the need to get that back under control,” he said.