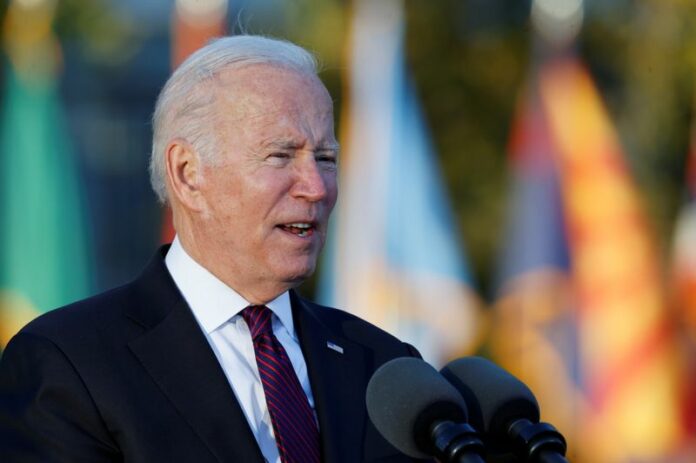 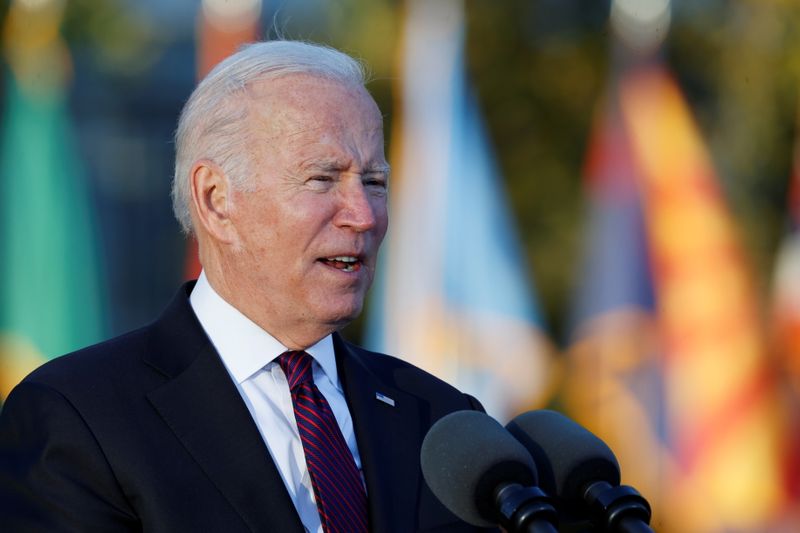 © Reuters. FILE PHOTO: U.S. President Joe Biden speaks during a ceremony to sign the “Infrastructure Investment and Jobs Act”, on the South Lawn at the White House in Washington, U.S., November 15, 2021. REUTERS/Jonathan Ernst

(Reuters) – Fresh from signing his signature bipartisan infrastructure bill, U.S. President Joe Biden will trek to New Hampshire, a key state in the 2022 midterms, on Tuesday to tout the bill’s benefits and revive the party’s slumping poll numbers.

Biden and his Democratic Party are betting that bipartisan progress and popular policies like investing in infrastructure and creating jobs can win over voters. The opposition Republican party remains divided over former President Donald Trump, his supporters’ Jan. 6 attack on the Capitol, and whether to cooperate with Biden on regular governance.

However, Republicans won key elections this month by warning about inflation and taxes under Biden, and stirring up anger on cultural issues, and Biden’s poll numbers are in a slump.

New Hampshire is home to a key U.S. Senate race and two congressional contests, all held now by Democrats, in a midterm where Biden’s party can afford barely any losses.

Biden is expected to travel to Woodstock, New Hampshire, to visit the NH 175 bridge, which spans the Pemigewasset River and has been on the state’s “red list” of bridges in poor condition since 2013.

He goes to Detroit on Wednesday to tout investment in electric vehicles, while Vice President Kamala Harris is expected to visit Columbus, Ohio, on Friday to highlight the package. The busy travel schedule is intended to hammer home the message that Democrats delivered on their promises.

“We are hoping that’s going to have an impact,” White House press secretary Jen Psaki told reporters on Monday.

Neil Levesque, the executive director at the New Hampshire Institute of Politics at Saint Anselm College, said it’s no secret that Biden is coming to New Hampshire to help stem the bleeding ahead of 2022.

“My latest poll shows that 68% of people here in New Hampshire believe the country’s on the wrong track, and that’s a very devastating number for people who are incumbents and are perceived responsible for that feeling,” Levesque said. In February, soon after Biden took office, 55% did, his poll shows.

Midterm elections are always challenging for the party that holds the White House. But losses for the Democrats this month in Virginia and New Jersey have raised wider concerns.

New Hampshire Senator Maggie Hassan, a Democrat, up for reelection in 2022, could face a close race, analysts say, even though the expected top Republican rival, Chris Sununu, decided to seek reelection for governor instead of challenging her.

Hassan has raised record amounts of money in successive quarters and is leaning into the bipartisan infrastructure bill, crisscrossing the state in recent weeks to visit water treatment plants, solar farms and other projects to tout the need for public investment.

“The measures that I helped fight for in this bill will strengthen our communities, jumpstart our economy, and create good jobs, and I look forward to working with the administration to get these dollars to New Hampshire as quickly as possible,” Hassan said in a statement to Reuters.

Biden’s job approval rating in New Hampshire – which he carried by 7.4 percentage points in 2020 – sits at around 44%, according to the latest statewide poll conducted in October by Saint Anselm College.

The entire Congressional delegation, all Democrats, are now underwater on job approval, the poll showed.