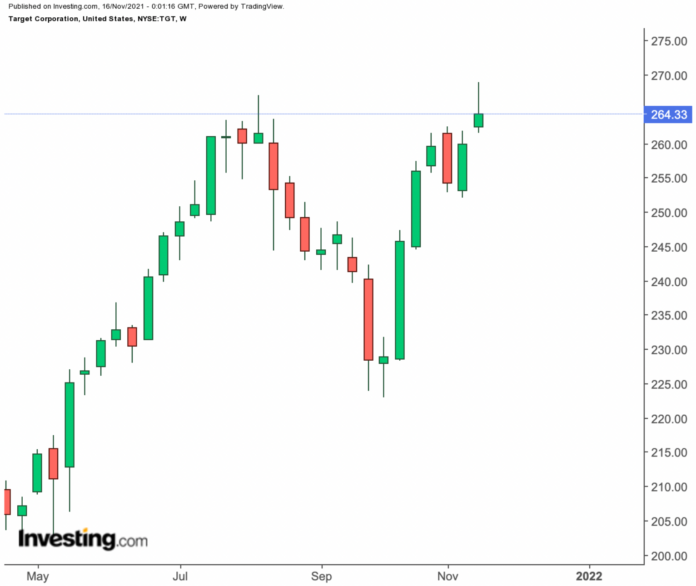 Based on Target’s (NYSE:TGT) stock performance this year, it’s clear the discount retailer has a solid lead over competitors in the post-pandemic environment, backed by its earning strength.

Shares of the Minneapolis-based discount retailer are up about 50% this year, massively outperforming closest rival, Walmart (NYSE:WMT). TGT stock closed on Monday at $264.33. The nation’s largest retailers benefited immensely from waves of pantry-stocking by American consumers. This resulted in massive spikes in sales of some categories, like toilet paper, snacks, and cleaning products. The demand surge was so strong that in the last fiscal year, Target increased revenue by more than it had in the previous 11 years combined.

As the U.S. economy reopens, many analysts believe that the best days for these big-box retailers’ sales growth are behind them. Target reported in August that its sales growth slowed in the second quarter, with same-store sales—a key measure of retail performance—rising 8.9%, narrowly beating a consensus estimate of 8.2%.

That slowdown is very much expected due to tough comparisons with last year’s pandemic boom, but the changing buying preferences of consumers could boost margins this year.

Target could see a jump in core profitability during 2021 because it’s selling more higher-margin items, like clothing. In the second quarter, for example, apparel was the best performer amongst its five core categories. According to Target’s forecast, the full-year operating income margin rate will be 8% or higher.

Target is also well-positioned to capture market share from competitors weakened by the pandemic, the result of TGT’s superior online services, including same-day order pickup and delivery.

Indeed, in recent years Target beefed up its investment in online services. Instead of spending heavily to establish a massive network of online fulfillment warehouses, it used stores as hubs to ship internet orders or allow shoppers to pick up their purchases from store parking lots.

Many analysts believe Target will be able to hold on to its gains in market share even after the pandemic is contained. In a note last week, JPMorgan kept its overweight rating on shares of Target, saying the company is a “clear winner” heading into the holiday season.

Where investors will seek clarity in tomorrow’s report will be on the question of whether Target’s business will be hampered by the global supply-chain disruptions during the crucial fourth quarter—which accounts for most retailers’ profits.

“Retail sales are expected to soar this holiday shopping season due to high consumer confidence as well as rising personal income. The shortage of some key goods should not derail holiday spending, since when consumers have money in their pockets, they will spend it.”

Target continues to retain its position as a top retailer even when sales are slowing after the pandemic boom. Tomorrow’s earnings might provide further evidence in support of this view.

Share
Facebook
Twitter
Pinterest
WhatsApp
Previous articleMCX Copper under fresh selling; Support seen at 727
Next articleNewsWatch: Stocks, gold, TIPS and these specialized ETFs all fight inflation. Here’s what you need to know about them.