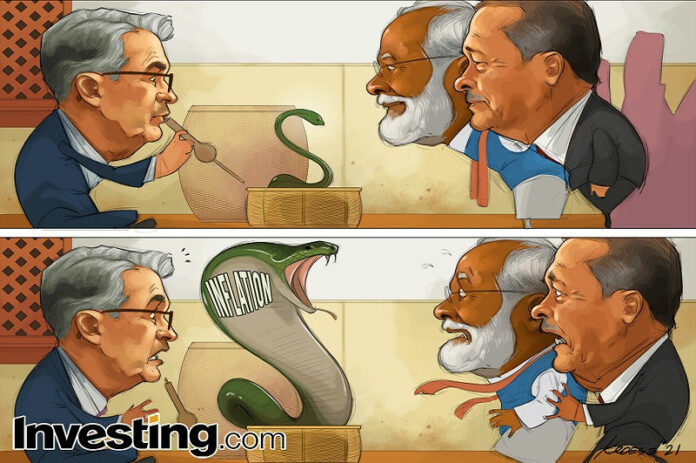 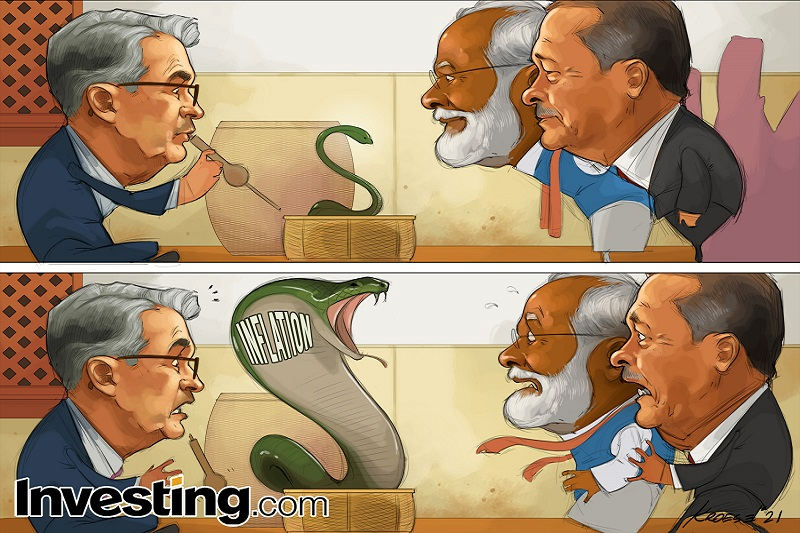 Investing.com — The surge in inflation that accompanied this year’s reopening of economies across the world has been higher and lasted longer than expected.

The good news is that it is still more likely than not that most of the factors driving it will unwind in the course of next year. The bad news is that it is likely to get worse in the short term, putting policymakers across the world under the kind of pressure that can easily lead to mistakes.

Wherever you look in the world right now, the numbers are ugly: Consumer price inflation is running at the highest in 30 years in the U.S. and the Eurozone, which account for some 40% of world GDP. And while there are signs that some of the supply chain disruptions behind this year’s price spike are unwinding price increases in other categories of goods are accelerating.

That’s particularly true for food prices: the UN’s FFPI food price index is at its highest since 2011 after rising 40 points over the last 18 months. Surging gas prices have forced fertilizer plants in Europe and Asia to shut down, creating the conditions for poorer harvests and still higher prices next year.

Global oil prices meanwhile have risen to their highest in over three years, putting further strain on the budgets of big energy importers such as China, India and Turkey. Turkey’s lira has plummeted to all-time lows against the dollar this month as the country’s central bank, under increasingly heavy intervention from President Recep Tayyip Erdogan, has refused to raise interest rates to bring inflation under control.

And yet, there are signs that the worst is over. Oil prices in particular now look set for a correction due to demand destruction and a belated reaction from U.S. producers to prices that now incentivize higher output. The International Energy Agency and the Organization of the Petroleum Exporting Countries both expect the world market to move into surplus by early 2021.

In the U.S., meanwhile, an 11% rise in vehicle output in October suggests that carmakers are finally starting to overcome the semiconductor shortage that crippled them in the summer, forcing car buyers to chase scarce inventory at any price.

In Europe, as hard as the European Central Bank’s hawks try to find it, there is little evidence of this year’s price rises feeding through into generalized wage increases – a point that ECB President Christine Lagarde again rammed home before the European Parliament on Monday.

Most of all, China – where annual producer price inflation hit 13.5% in October – is now entering a period of disinflation, due to the weakening of a real estate sector that has accounted for over a quarter of GDP in recent years.

That’s already being seen in the price of inputs such as steel – iron ore futures have fallen nearly 60% from their June peak to trade at their lowest since June 2020.  Consumer prices also continue to behave – rising only 1.5% on the year through October.

“We expect deflationary price trends to intensify next year as growth slows owing to the fallout of the Evergrande crisis on property demand and associated inputs into property construction,” said TS Lombard economist Lawrence Brainard in a recent note to clients.

And among the short-term pressures, it’s easy to lose sight of the fact that other long-term disinflationary pressures haven’t gone away. The advance of automation continues every day, and the inflationary shock on trade under Donald Trump is starting to be unwound as the U.S. and EU remove tariffs on each other’s goods. A seemingly constructive call this week between Presidents Joe Biden and Xi Jinping suggests that tariffs may – perhaps – be lifted there too.

Things could still go wrong, of course. They always can. The risk, as U.S. Treasury Secretary Janet Yellen emphasized at the weekend, is that failure to bring the pandemic under control will only extend the current period of extreme distortions to the markets for goods, services and labor that are driving inflation.

Right now, that risk is on the rise again, as cases rises across the Northern Hemisphere, prompting record deaths in eastern Europe, fresh store and bar closures.

But all other things being equal, there is still no reason to think that global inflation is spiraling out of control. The pain for consumers is real, and the nerves at central banks will remain taut for some time, but claims that inflation is about to spiral out of control still seem misplaced.