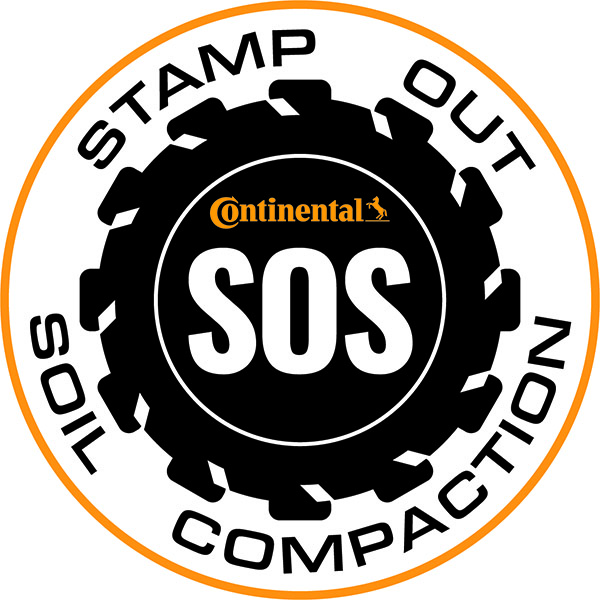 Continental is working with several other leading agri businesses to raise awareness of soil compaction caused by heavy machinery and to highlight the simple measures that can reduce the problem. “The ‘stamp out soil compaction’ campaign has been launched to demonstrate how the right choice of tyres and maintaining tyre pressures can help to minimise soil compaction. Continental has also developed a mobile app to help operators choose the correct pressure for any given load,” says Continental’s agricultural tyre specialist, Richard Hutchins.

Working with ADAS soil scientist John Williams, Continental has highlighted that up to 30% of soils in the UK are severely degraded and that 39% of the cost attributed to compaction could be reduced by choosing the correct tyres and running machines at the optimum pressure for load.

The first machinery test used a KUHN Optimer XL 5000 to show how reducing pressures by almost half the recommended road inflation reduced soil compaction and improved the operating efficiency of the tractor and the cultivator.

On a stubble field, the rear tyres of a Fendt 720 were set to 9 psi and the front to 12 psi. “This is less than half what the tractor could operate with on the road, and it demonstrates the difference needed to operate at the right pressure for load when using large implements,” he says.

In contrast, the same tractor was also run at 21 psi in both the front and rear tyres. “The tyre slip increased dramatically when the pressures were increased, rising from below 10% to above 40%. The tractor was visibly struggling for grip and was leaving skid marks in the soil. A greater percentage of the overall weight was being applied to a smaller surface area which severely compacted the soil,” he says.

The weight of farm vehicles and the tyre pressures chosen are a major contributor to soil compaction. Mr Hutchins suggests that increased axle weights, caused by heavy implements and more powerful machines, can be offset by tyres that can spread this weight. “Damage to topsoil is caused by incorrect tyre inflation, whilst compaction in subsoil is largely caused by increased axle loads. Calculating the correct pressure for load will minimise the impact farming has on both,” he explains.

To help operators, Continental has designed an app that calculates the correct pressure for load based on the type of tyre and the weight of the vehicle, including any implement being used. “The Agriculture TireTech app can be operated using both iOS and Android devices. It is free to download and easy to use,” he says.