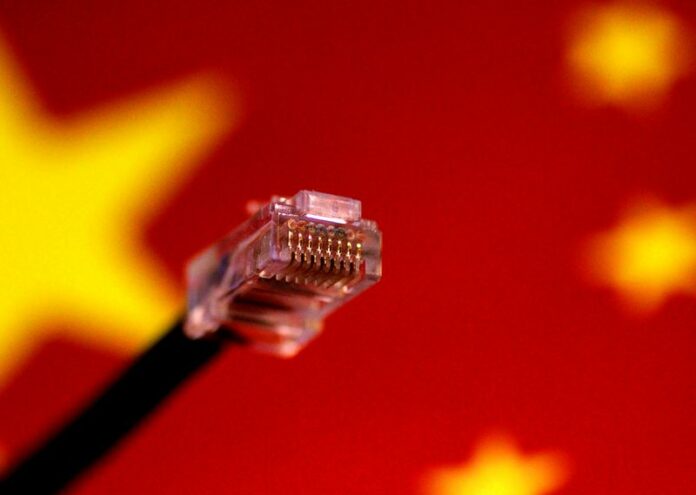 © Reuters. FILE PHOTO: A computer network cable is seen above a Chinese flag in this July 12, 2017 illustration photo. REUTERS/Thomas White/Illustration

SHANGHAI (Reuters) -China’s market regulator proposed new rules on Friday that would increase online advertising oversight, including stipulating that adverts should not affect normal internet use or mislead users.

Authorities in China have tightened regulation across a range of industries this year, with an emphasis on technology.

Internet advertising must “meet the requirements for the establishment of socialist spiritual civilization and the promotion of excellent traditional culture of the Chinese nation”, the State Administration for Market Regulation said.

The proposed rules call on platform operators to establish a system for registering and reviewing advertisers and adverts, and “monitor and inspect the content of advertisements displayed and published by using its information services.”

The proposed rules also call for bans on advertisements aimed at minors promoting medical treatments, cosmetics and online games “that are not conducive to the physical and mental health of minors.”

The proposed new rules are open for public comment until Dec. 25, the regulator said on its website.

Shares in Hong Kong-listed Tencent and delivery giant Meituan fell 0.5% and 1% respectively after the draft rules were published.

In September, China’s cyberspace regulator published draft rules dictating how companies can use algorithmic recommendations, after earlier rules pertaining to the use of data and unfair competition.

Before that, Chinese ride-hailing giant Didi Chuxing fell subject to a probe for alleged privacy violations days after it listed in the United States, while e-commerce giant Alibaba (NYSE:BABA) Group Holding Ltd received a record $2.8 billion fine for anti-competitive behaviour.