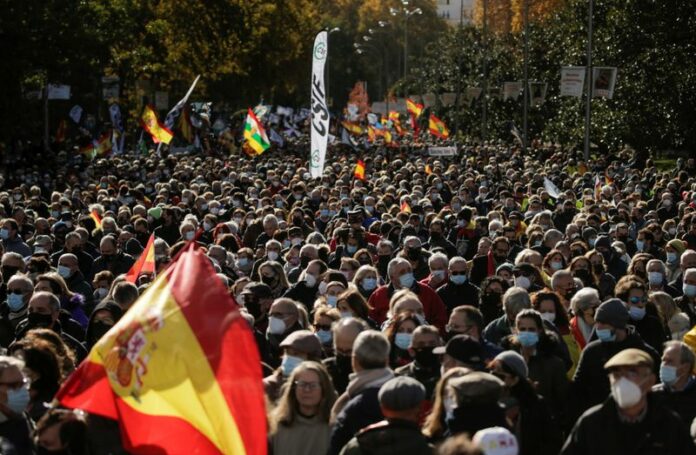 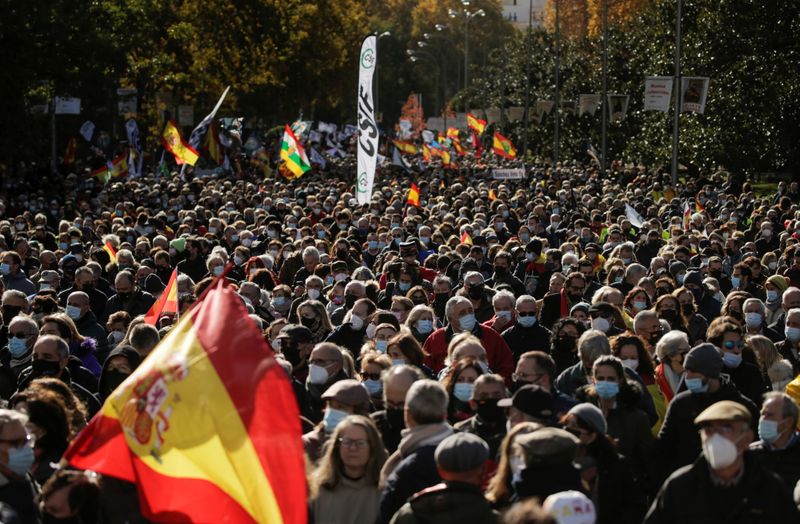 © Reuters. People attend a protest against the proposed changes to anti-terrorism and gagging laws, which police officers say will undermine their authority and jeopardise the safety of citizens, in Madrid, Spain, November 27, 2021. REUTERS/Javier Barbancho

By Miguel Gutierrez and Marco Trujillo

MADRID (Reuters) – Thousands of Spanish police officers marched through Madrid on Saturday to protest against a proposed reform of a security law which they say will hamper their ability to do their work.

Politicians from Spain’s three main conservative parties joined police officers in the protest against proposed changes to the 2015 Citizens Security Law, which critics say violates the right to protest and limits free expression.

Dubbed the “Gag Law” by those who oppose it, the legislation allows authorities to fine media organisations for distributing unauthorised images of police, strictly limits demonstrations and imposes heavy fines for offenders.

Spain’s leftist government has proposed reforms including no longer classifying the taking of photographs or making of recordings of police at demonstrations as a serious offence.

Under the changes, police will also have to use less harmful materials at protests after a number of people were seriously injured by rubber bullets fired by officers.

The time that suspects who are arrested at protests can be held in custody will be cut from six hours to two and fines will be proportional to how much offenders earn.

“They should either leave the current law as it is or make it better for the police and for the citizens,” Civil Guard officer Vanessa Gonzalez told Reuters.

Ivan Espinosa de los Monteros, of the far-right Vox party, said: “There is strong opposition against (the reform) of this law. It is against our police and we will not let it happen.”

However, Isa Serra, spokeswoman for the far-left Unidas Podemos party, said at a rally in Cantabria in northern Spain that the law had done a “lot of damage to Spanish democracy”.

Organisers said 150,000 people took part in the Madrid demonstration but the government put the figure at 20,000.