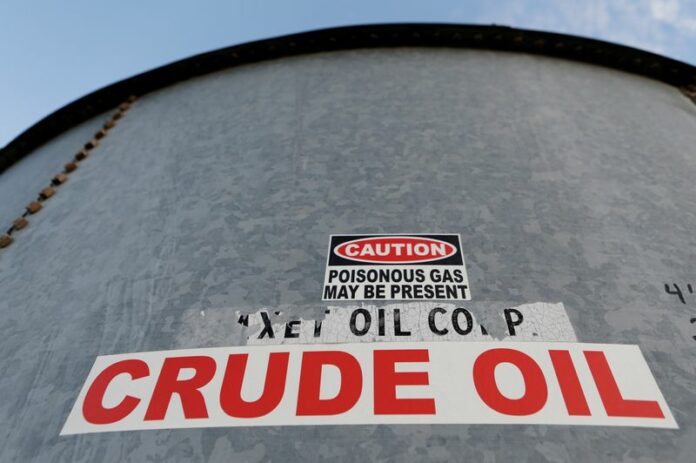 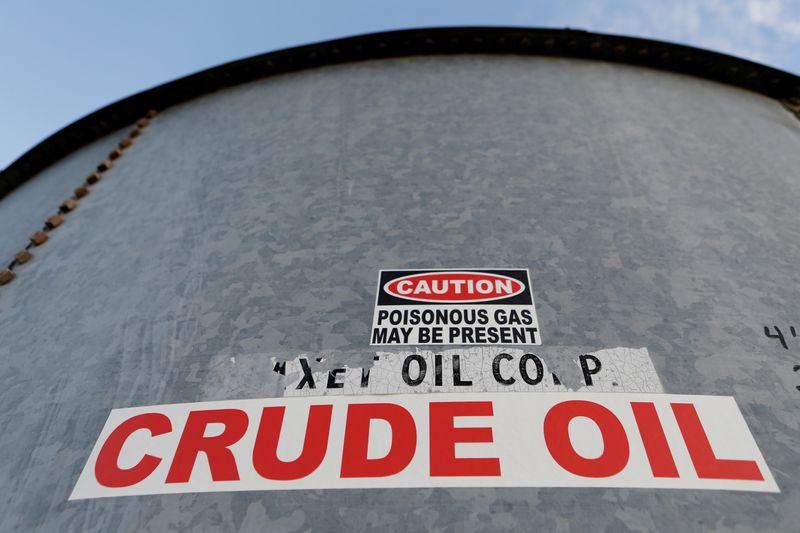 © Reuters. FILE PHOTO: A sticker reads crude oil on the side of a storage tank in the Permian Basin in Mentone, Loving County, Texas, U.S. November 22, 2019. REUTERS/Angus Mordant

TOKYO (Reuters) – Oil prices rose on Monday, recouping some losses after Friday’s plunge of about $10 a barrel, as investors looked for bargains but remained cautious with the focus on the Omicron coronavirus variant and Iran nuclear deal negotiations.

Oil prices crashed together with other financial markets on Friday by more than 10%, their largest one-day drop since April 2020, as the new variant spooked investors and added to concerns that a supply surplus could swell in the first quarter.

“There was correction buying on views that the oil market had been oversold last week and on speculations that OPEC+ may take a measure against the Omicron, potentially cutting output,” said Hiroyuki Kikukawa, general manager of research at Nissan (OTC:NSANY) Securities.

“All eyes will be on how the Omicron will affect global economy and fuel demand, OPEC+ action and Iran nuclear talks this week,” he said.

The Omicron coronavirus variant spread around the world on Sunday, with new cases found in the Netherlands, Denmark and Australia even as more countries imposed travel restrictions.

The World Health Organization (WHO) said it was not yet clear whether Omicron, first detected in Southern Africa, is more transmissible or dangerous than other variants.

The Organization of the Petroleum Exporting Countries and its allies (OPEC+) have postponed technical meetings to later this week, giving themselves more time to assess the impact of the Omicron variant on oil demand and prices, according to OPEC+ sources and documents.

OPEC+ will meet on Thursday instead of Tuesday, when a policy decision will likely be announced on whether to adjust its plan to increase output by 400,000 barrels per day in January and beyond.

OPEC+ has been releasing 400,000 barrels per day of oil per month while winding down its record cuts from last year.

Some analysts have suggested the group could pause increases after the release of stocks by oil consuming countries and possible repercussions for demand from new lockdowns to contain the new variant.

Meanwhile, talks on reviving the 2015 Iran nuclear deal are to resume in Vienna on Monday, with Iran’s atomic advances raising doubt as to whether a breakthrough can be made to bring Tehran and the United States back into full compliance with the accord.