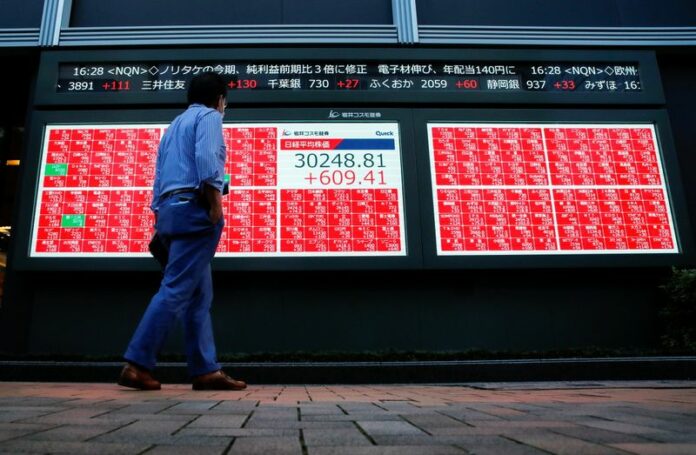 © Reuters. A man wearing a protective face mask amid the coronavirus disease (COVID-19) outbreak, looks at an electronic board displaying Japan’s Nikkei Index outside a brokerage in Tokyo, Japan, September 24, 2021. REUTERS/Kim Kyung-Hoon

SYDNEY (Reuters) – U.S. stock futures led a market rebound on Monday as investors prepared to wait a few weeks to see if the Omicron coronavirus variant would really derail economic recoveries and the tightening plans of some central banks.

Oil prices bounced more than $3 a barrel to recoup a chunk of Friday’s shellacking, while safe haven bonds and the yen lost ground as markets latched onto hopes the new variant of concern would prove to be “mild”.

While Omicron was already as far afield as Canada and Australia, a South African doctor who had treated cases said symptoms of virus were so far mild.

“What the news on Omicron does highlight is the need for central banks and governments to take a cautious approach to removal of economic support and stimulus.”

Trading was erratic on Monday but there were signs of stabilisation as S&P 500 futures added 1.0% and Nasdaq futures 1.2%. Both indices suffered their sharpest fall in months on Friday with travel and airline stocks hit hard.

MSCI’s broadest index of Asia-Pacific shares outside Japan eased 0.1%, but found support ahead of its 2021 low. Likewise, Japan’s Nikkei recouped early losses to be almost unchanged.

Bonds gave back some of their hefty gains, with Treasury futures down 16 ticks. The market had rallied sharply as investors priced in the risk of a slower start to rate hikes from the U.S. Federal Reserve, and less tightening by some other central banks.

Two-year Treasury yields edged up to 0.56%, after falling 14 basis points on Friday in the biggest drop since March last year. Fed fund futures had pushed the first rate rise out by a month or so.

The shift in expectations undermined the U.S. dollar, to the benefit of the safe haven Japanese yen and Swiss franc.

European Central Bank President Christine Lagarde put a brave face on the latest virus scare, saying the euro zone was better equipped to face the economic impact of a new wave of COVID-19 infections or the Omicron variant.

The economic diary is also busy this week with China’s manufacturing PMIs on Tuesday to offer another update on the health of the Asian giant. The U.S. ISM survey of factories is out on Wednesday, ahead of payrolls on Friday.

“The move all but guarantees the OPEC+ alliance will suspend its scheduled increase for January at its meeting on 2 December,” wrote analyst at ANZ in a note.

“Such headwinds are the reason it’s been only gradually raising output in recent months, despite demand rebounding strongly.”

Gold has so far found little in the way of safe haven demand, leaving it stuck at $1,791 an ounce.[GOL/]