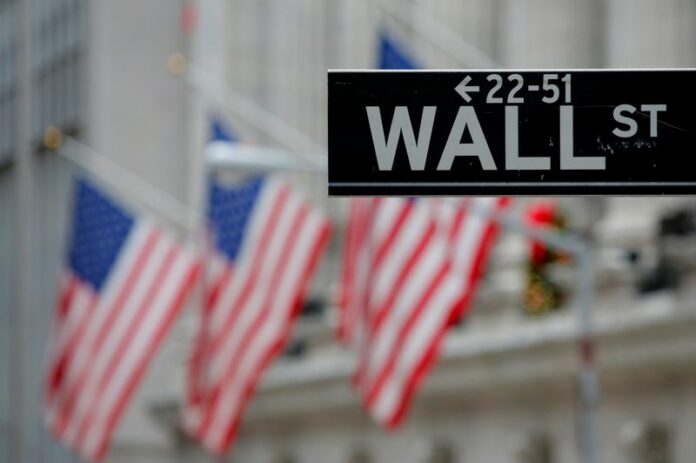 By Ambar Warrick and Sinéad Carew

(Reuters) – Wall Street regained some of Friday’s losses on Monday, with the technology sector leading the charge and investors appearing to be somewhat reassured by U.S. President Joe Biden’s comments about the Omicron virus variant.

The S&P and the Dow suffered their biggest one-day percentage declines in months in Friday’s holiday-shortened session as investors worried that the latest variant of the COVID-19 virus would cause economic disruption.

But Biden said on Monday that Omicron-related lockdowns were off the table for now, though he noted the variant was a cause for concern but not for panic as he urged Americans to get vaccinated and wear masks indoors.

Those comments and indications from drug companies that they are taking the variant seriously were reassuring for investors, who had been anxious about the potential for further COVID restrictions, according to Carol Schleif, deputy chief investment officer for the BMO family office in Minneapolis.

“It’s not like the start of the pandemic all over again,” said Schleif, who also noted that after Friday’s knee-jerk reaction, investors have been trained this year to buy the dip. “People are willing to just take a deep breath and try to reassess, be a little more patient.”

Among the S&P’s 11 major sectors, technology led with an almost 3% gain, followed by real estate and consumer discretionary.

Gains in Amazon.com (NASDAQ:AMZN) and Tesla (NASDAQ:TSLA) Inc helped boost the S&P with investors viewing Friday’s losses as a cue for bargain-hunting on high-value tech names.

“People are looking at it as a little bit of a sale on Friday and an opportunity to get into some areas of the market that got hit hard,” said Robert Pavlik, senior portfolio manager at Dakota Wealth Management.

The Dow was up solidly but underperformed its peers under pressure from Merck & Co Inc, which was down more than 5.8%. It extended losses from Friday, when updated data from a study of its experimental COVID-19 pill showed lower efficacy in reducing risk of hospitalization and deaths than previously reported.

Among other stocks, casino operators Wynn Resorts (NASDAQ:WYNN) and MGM Resorts (NYSE:MGM) International fell 3% and 0.7%, respectively, tracking losses in their Macau units, which were rattled by arrests over alleged links to cross-border gambling and money laundering.

Tesla’s shares gained 4% after a report that chief Elon Musk urged employees to reduce the cost of vehicle deliveries.

The S&P’s biggest boost was from Apple Inc (NASDAQ:AAPL), which gained 2% after HSBC raised its price target on the iPhone maker’s stock.

Advancing issues outnumbered declining ones on the NYSE by a 1.43-to-1 ratio; on Nasdaq, a 1.14-to-1 ratio favored decliners.