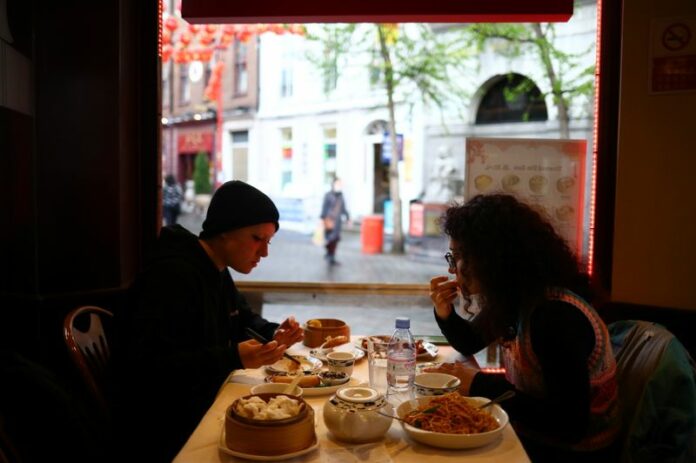 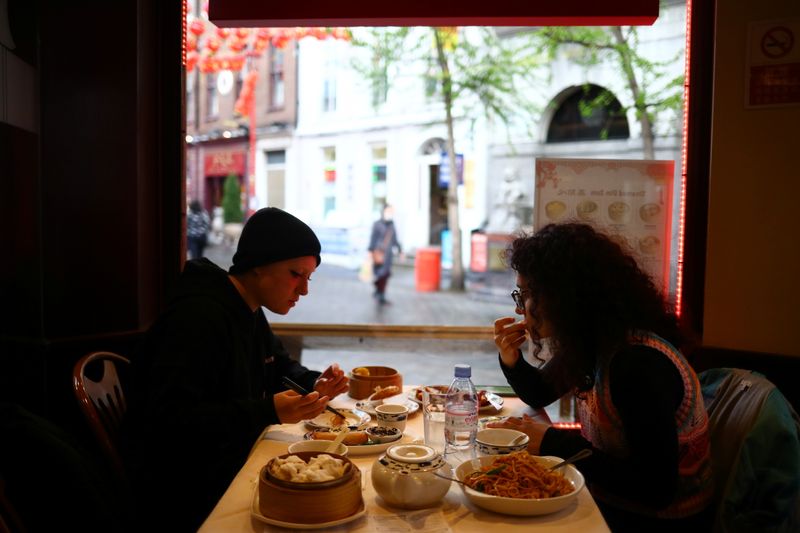 © Reuters. FILE PHOTO: People sit inside a restaurant, amid the outbreak of the coronavirus disease (COVID-19), in Chinatown, London, Britain, 18 May 2021. REUTERS/Hannah McKay

LONDON (Reuters) – Costs are rising at the fastest rate in over 20 years for firms in Britain’s services sector, according to a business survey released on Tuesday which shows why the Bank of England may soon raise interest rates.

The Confederation of British Industry said its quarterly survey of the services sector showed the quickest growth in costs for both business and consumer services companies since the survey began in 1998.

Separate data from Lloyds (LON:LLOY) Bank showed a record 50% of businesses plan to raise prices and a quarter of them expect to raise pay by 3% or more over the next 12 months.

“Record growth in costs is threatening to put a winter freeze on the service sector recovery next quarter,” CBI economist Charlotte Dendy said.

Both surveys took place in the first half of November, before news of the Omicron variant of COVID-19 dented the confidence of financial market investors who now see a roughly 60% chance that the BoE will raise rates in December.

British consumer price inflation hit a 10-year high of 4.2% in October and the BoE expects it to reach nearly 5% next year.

In the short run, higher interest rates will not reduce pressure from a global surge in energy prices and supply chain difficulties. But they may reduce knock-on effects that would come if companies increase prices, and workers ask for higher pay, in anticipation of permanently higher inflation.

Tuesday’s CBI data showed businesses already think they will be unable to pass on higher costs in full. Although average selling prices are expected to rise by a record amount, profit growth is expected to stall over the coming three months for services firms, due to the rise in costs.

The CBI reported the fastest hiring since 2015 by business and professional services companies.

Data from recruitment website Indeed, also released on Tuesday, showed vets, optometrists, auditors, animators and truck technicians were the roles that their customers were finding it hardest to fill.

The big rotation: European tech in biggest monthly drop in 13...