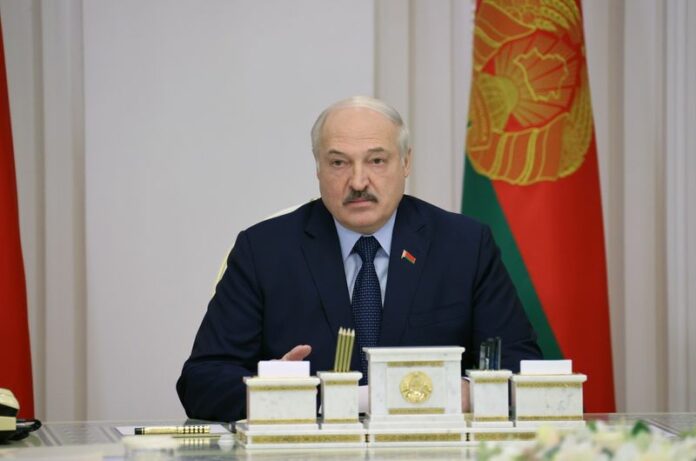 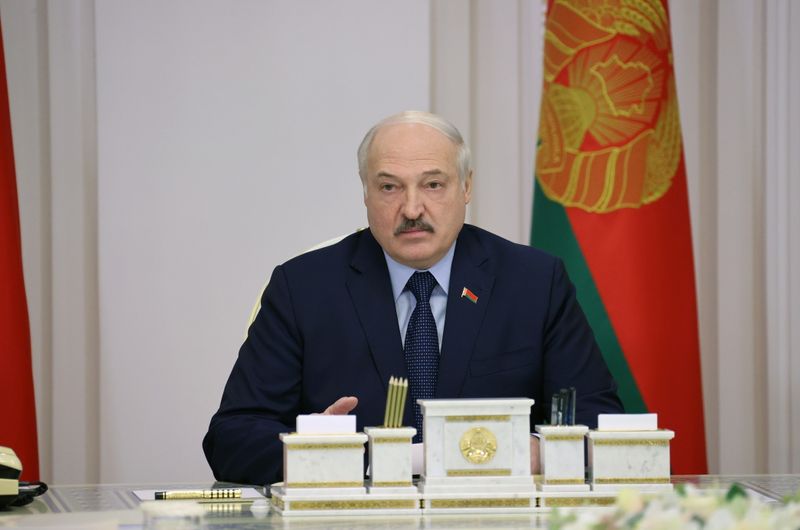 By Daphne Psaledakis and Simon Lewis

WASHINGTON (Reuters) -The United States and its allies, including the European Union, on Thursday imposed sanctions against dozens of individuals and entities in Belarus in a coordinated move to escalate punitive action against President Alexander Lukashenko and his government.

The latest round of sanctions aim to significantly increase pressure on Lukashenko, who is accused of rigging the presidential election last year to stay in power, ordering a massive crackdown on the opposition, and recently sending migrants to the Eastern European nation’s border with the EU in an effort to manufacture a crisis for the bloc.

Thursday’s action was coordinated between the United States, Canada, Britain and the EU. In a joint statement, the group called on Lukashenko’s government to immediately and completely halt its orchestrating of irregular migration across its borders with the EU.

“Those, in Belarus or in third countries, who facilitate illegal crossing of the EU’s external borders should know this comes at a substantial cost,” the statement said.

The U.S. sanctions designated 20 individuals and 12 entities, taking aim at the country’s defense, security and potash sectors as well as government officials and Lukashenko’s son.

Washington also restricted Americans from dealing in new Belarusian sovereign debt with a maturity greater than 90 days issued on or after Thursday by the country’s finance ministry or Development Bank.

The EU, for its part, imposed sanctions on the state-owned Belarusian airline Belavia. EU governments blacklisted 17 individuals and 11 entities https://www.reuters.com/world/europe/eu-imposes-new-sanctions-belarus-coordination-with-us-britain-2021-12-02, targeting judges and top Belarusian officials, taking the number of people under sanctions to 183, as well as 26 entities.

The Belarusian Foreign Ministry said it would retaliate against the EU sanctions, which it said were designed to strangle the country and worsen the lives of its people.

“As a response, as we have previously said, we will take harsh, asymmetrical but adequate measures.”

It did not immediately comment on the actions by the United States, Canada or the United Kingdom.

As part of Thursday’s move, Washington imposed sanctions on the Belarusian state-owned tourism company and seven Belarusian government officials over the migrant crisis.

EU countries have accused Belarus of creating a migrant standoff nL1N2SM0RR on the bloc’s eastern borders by encouraging thousands from the Middle East and Africa to try to cross into Poland and Lithuania, in revenge for Western sanctions on Minsk.

Lukashenko denies doing so and pins the blame for the crisis on the EU.

Rights groups say at least 13 people have died as migrants have camped in freezing conditions at the border.

Entities related to the potash sector were also blacklisted on Thursday in an effort to limit the financial benefits Lukashenko’s government derives from potash exports.

Washington, which blacklisted Belaruskali in August, added its exporting arm, the Belarus Potash Company (BPC), to its blacklist. Shares of global potash producers rose on Thursday following the announcement.

BPC did not immediately reply to a request for comment.

The United States also blacklisted state-owned cargo carrier Transaviaexport Airlines, which it accused of shipping thousands of tons of ammunition and weapons to foreign conflict zones such as Libya, as well as five entities that produce or export defense materials.

The defense firms listed included the makers of riot control barriers and armored vehicles that were deployed against crowds protesting the official results of the August 2020 presidential election. Lukashenko was declared the winner with about 80% of the vote despite opposition claims that he had lost the race.

“This is exactly what you want to see out of the U.S. It’s a big action, it will have lots of impact, and there’s still lots of head room,” he said.