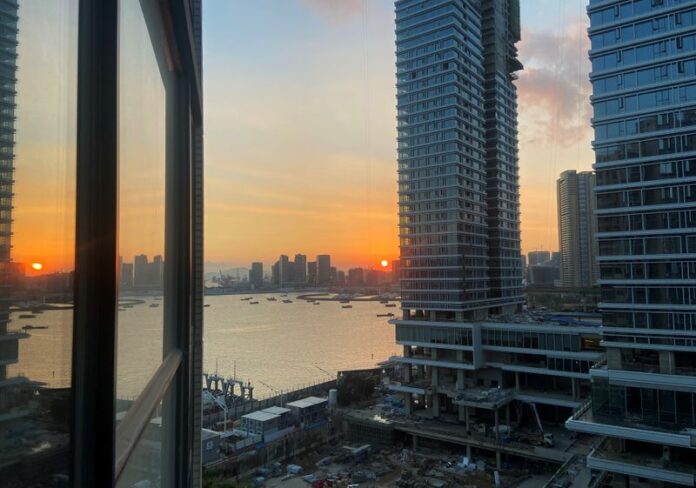 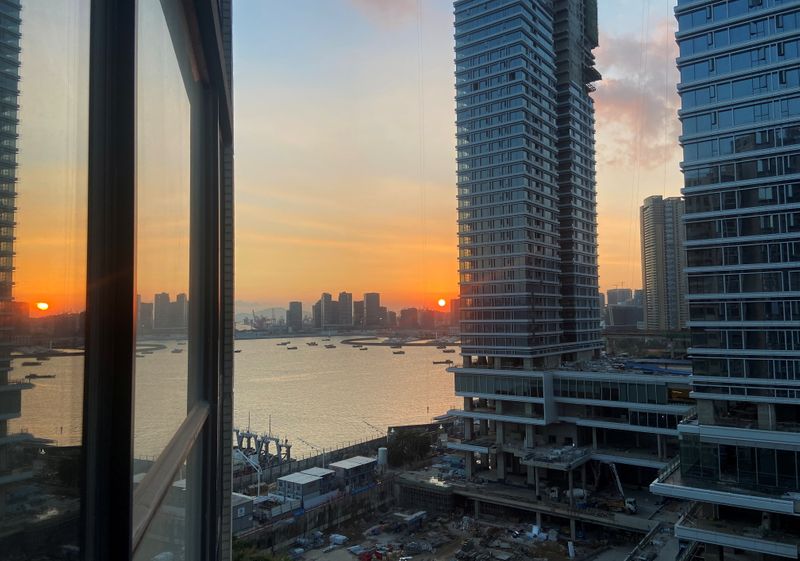 © Reuters. Under-construction apartments are pictured from a building during sunset in the Shekou area of Shenzhen, Guangdong province, China November 7, 2021. REUTERS/David Kirton

By Liangping Gao and Tony Munroe

BEIJING(Reuters) – China’s property downturn is expected to continue into the first half of 2022, with home prices and sales falling as tight credit policies and a looming property tax dampen demand, a Reuters poll showed.

The property sector, a key driver of growth in the world’s second-largest economy, has slowed sharply in recent months, with sentiment shaken by tight regulations and a growing liquidity crisis that has engulfed some of the country’s largest and most indebted developers.

Forecasts for home prices and property investment were gloomier than the last poll in August.

Average home prices are estimated to fall 1.0% in the first half of 2022, according to 14 analysts and economists surveyed by Reuters from Nov. 26 to Dec. 1.

“The downward trend in home prices has emerged” due to tight quotas on home loans, worries about a property tax and weak demand, said Chen Shen, an analyst from Huatai Securities.

On the demand side, property sales by floor area are forecast to slump 16% in the first half of 2022, compared with a 27.7% rise in the same period this year.

The expectation for the supply-side is also gloomy, with property investment seen dropping 3.0% in the first six months of 2022, versus a 15% rise in the first half of this year.

Rapidly deteriorating conditions in the property sector have prompted speculation that policymakers may start to dial back tough restrictions on buyers and developers and even cut interest rates if economic growth falters too sharply.

But most China watchers expect authorities to largely stick to curbs for now, even as they fine-tune regulations, including marginal loosening of credit policies.

Policymakers recently made some tweaks to help genuine home buyers and some local authorities have moved to ease a financial crunch at developers.

Chengdu, in the south west of China, last week issued a notice to ensure developers receive funds from presold properties and fresh loans.

Among the 14 interviewees, four expect pilot testing of a property tax to be expanded to some wealthy cities, such as Shanghai and Shenzhen, by the end of this year at the earliest, and eight think they will be introduced in 2022.

As for how a property tax would affect home prices? Most people think it depends on the tax rate, though it is expected to rein in soaring home prices in the short term.

Most agree that property will be more affordable over the next two and three years under President Xi Jinping’s “common prosperity” campaign and the government slogan “houses (are) for living in, not for speculation”.

(For other stories from the Reuters quarterly housing market polls: ) (This story refiles to add byline. Text unchanged)