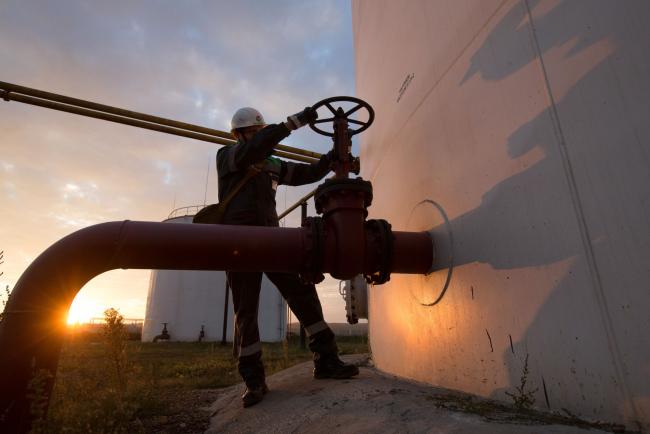 © Bloomberg. An employee turns a control valve on pipework beside a storage tank at an oil delivery point operated by Bashneft PAO in Sergeevka village, near Ufa, Russia, on Monday, Sept. 26, 2016. Bashneft distributes petroleum products and petrochemicals around the world and in Russia via filling stations. Photographer: Andrey Rudakov/Bloomberg

(Bloomberg) — Oil rose in early Asian trading after the OPEC+ alliance decided to keep restoring supply, but also said it could revisit the decision at any moment due to high levels of uncertainty in the market.

West Texas Intermediate advanced as much as 2.2% after closing up 1.4% on Thursday following the decision by the producer group. The cartel agreed to add 400,000 barrels a day of crude to global markets in January, a move that should please nations worried about high prices — notably the U.S.

However, it also left the door open to changing the plan at short notice. That’s an unusual step that underscores the difficulty in assessing the supply-demand balance over the short term due to the omicron virus variant and the White House-led release of national reserves.

Crude has dropped sharply since late October on growing signs major consuming nations would tap their reserves, the emergence of the new virus variant and a more hawkish Federal Reserve. Some analysts think the declines have been excessive, with Goldman Sachs Group Inc (NYSE:GS). saying prices have “far overshot” the impact of omicron and Bank of America (NYSE:BAC) sticking to its $85-a-barrel forecast in 2022.

The OPEC+ decision could suggest it’s not all that worried about the demand impact from omicron, Morgan Stanley (NYSE:MS) analysts led by Martijn Rats said in a note. However, it also could indicate a more cooperative stance from OPEC toward the U.S., they said.

Brent’s prompt timespread was 35 cents a barrel in backwardation, a bullish structure where near-term prices are higher than those further out, on Thursday. That’s an improvement from 30 cents the day before, but is down from $1.30 a week earlier.