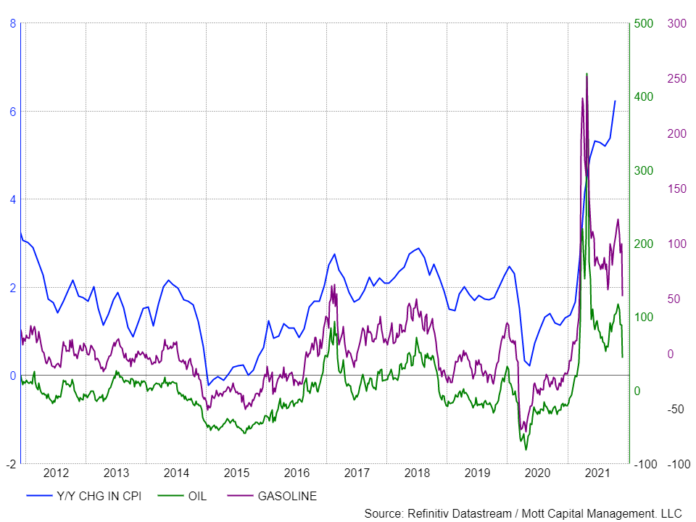 Wouldn’t it be ironic if, at the exact moment that the Fed threw up its hands and capitulated on its transitory inflation narrative, inflation came crumbling down?

Inflation might be ready to take a turn lower, and it could show up as early as the November data release.

One of the most highly correlated components of the consumer price index (CPI) and the producer price index (PPI) is oil, and oil has plunged by about 20% since Nov. 10. Gasoline prices have also slid and are down over 22%. This change in oil and gasoline prices also appear to be weighing on 10-year breakeven inflation rates, which have also fallen about 25 bps just since Nov. 15.

More importantly, the yield curve has fallen dramatically over the past several weeks, as the front end of the curve rises and the backend falls. It has resulted in the 10-2 year Treasury Yield Spread falling to around 85 bps, while the 30-year minus the 5-year has fallen to approximately 65 bps. It is potentially signaling a reversal in inflation and slower economic growth. If inflation were to take a nasty turn and start decelerating at a rapid pace, it would create a whole new set of issues for the Fed. At the same time as the market is starting to worry about slowing growth because the Fed is tightening financial conditions by cutting back on its asset purchases.

The stock market could very quickly and forcefully start pushing back on the Fed’s ambitions to taper, creating a big mess in the process.

Of course, that would be the irony in all of this. The Fed has had the stance for a very long time that inflation would be transitory and that rates would moderate back to their historical trends. But then it changes its stance, just as the dynamics and macro backdrop have changed and shown evidence of potential easing in some of the most significant contributors to inflation.

At the same time, the risk would be increasing that the Fed would have to reverse its plans to taper at all. Much of the inflation we have seen has come through supply constraints. But a lot of it has also come from sharp declines in many critical commodities in 2020, followed by a swift rebound, which overstates those rates.

It would be just ironic that at the exact moment in time when the Fed backs away from transitory inflation, inflation turns out to be, well, transitory.

I guess stranger things could happen.