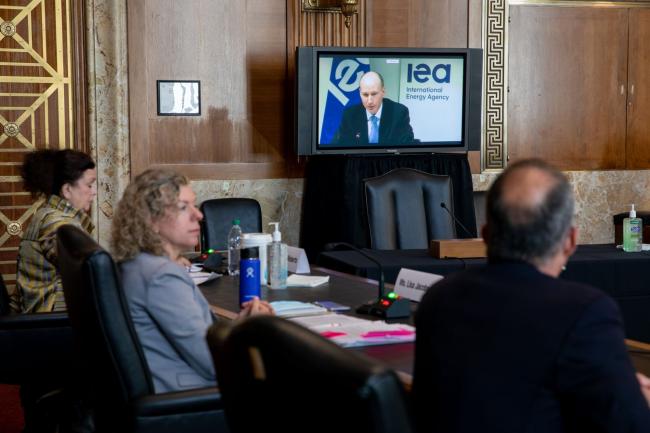 © Bloomberg. David Turk, acting deputy executive director of the International Energy Agency, speaks via video conference during a Senate Energy and Natural Resources Committee hearing in Washington, D.C., U.S., on Tuesday, June 16, 2020. The hearing will examine the impacts of Covid-19 on the energy industry.

(Bloomberg) — The Biden administration’s No. 2 energy official was heckled at an international oil conference after admonishing U.S. drillers to step up production in the industry’s de facto hometown.

Deputy Energy Secretary David Turk told shale explorers on Monday that the government already has done its part to lower fuel prices by offering up part of its strategic crude reserve.

“Now there’s needed leadership by our domestic producers,” Turk said in opening remarks at the World Petroleum Congress in Houston. “The reality is the Biden administration is not standing in the way of increasing domestic oil production to meet today’s energy needs.

His remarks provoked a heckler in the audience: “Why don’t you help us then?”

Turk, whose comments preceded presentations by the chief executives of Exxon Mobil Corp (NYSE:XOM). and Chevron Corp. (NYSE:CVX) — the nation’s largest oil explorers — came on the same morning that refiners’ bids for crude from the strategic reserve were due.

“The top 54 publicly traded companies earned over $30 billion in the second quarter of this year, slightly more than just before the pandemic, and production has not yet recovered,” Turk said.

India Base Metals: MCX, LME down on firm dollar; US econ data eyed

India Base Metals: MCX, LME down on firm dollar; US econ data eyed

India Rubber: Prices fall in Kerala on weak sentiment, up on TOCOM