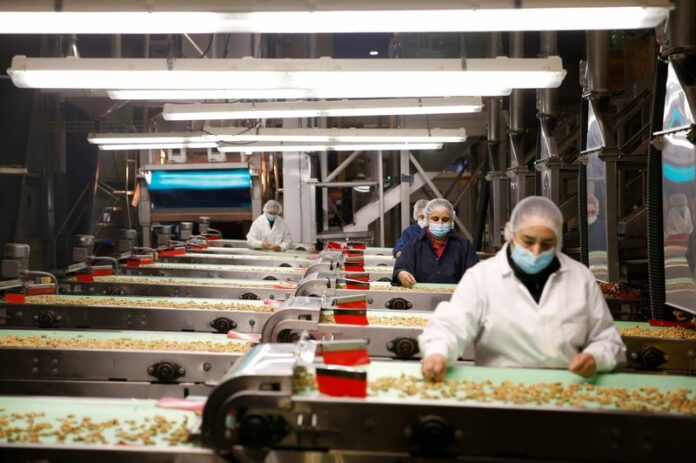 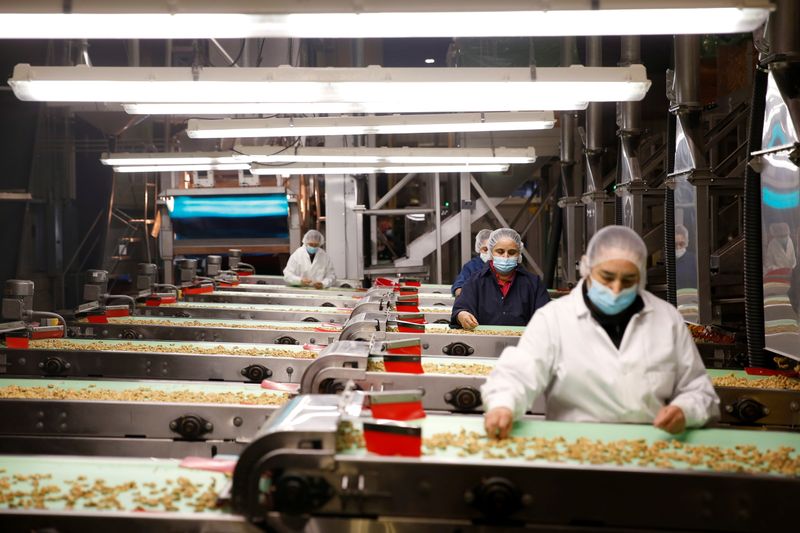 By Sharon Bernstein and Nathan Frandino

ESCALON, Calif. (Reuters) – The shrink-wrapped boxes of fresh California walnuts stacked almost to the ceiling in Don Barton’s California packing facility should be headed to Europe for holiday baking and to Asia for New Year celebrations.

Instead, newly cleaned and shelled nuts – about $10 million worth – are stuck at his processing plant near Sacramento, thousands of miles from their destinations, as the global supply chain crisis squeezes ports.

Transportation and supply-chain problems are hurting farmers across the U.S. West Coast, a major global supplier of specialty crops like fruits and nuts popular at year-end celebrations.

Ships that would normally pick up walnuts from Barton’s company, Gold River Orchards, are skipping the Port of Oakland where the nuts are usually exported, or showing up at odd or unexpected times that make it difficult to get the product to the docks.

“We are shipping right now less than half of what we should be shipping and could be shipping this time of the year, simply because there’s not equipment available,” said Barton, standing amid towering processing machinery and pallets loaded with boxes marked for shipment abroad.

Ships are also skipping the Northwest Seaport complex in Seattle and Tacoma where hay, apples and beans wait to be exported. At the ports of Los Angeles and Long Beach, freighters wait for weeks for a berth in the harbor, only to then leave abruptly, in many cases without picking up goods for export.

Much of the shipping crunch resulted from the COVID-19 pandemic. Home-bound Americans flush with unspent travel and entertainment dollars and government stimulus splurged on everything from food and refrigerators to toys and exercise equipment. The demand for imports overwhelmed supply chains and prompted container shipping lines to focus on the most profitable routes between China and the Port of Los Angeles, skipping others.

Farmers who agreed to deliver fruit, nuts and other products in time for the holidays are defaulting on their contracts, losing business to foreign growers they say may never come back.

At the Port of Oakland, just 679 vessels stopped to pick up goods during the first nine months of 2021, compared with 959 the prior year, said spokeswoman Marilyn Sandifur, although some of the drop was made up by additional cargo carried by larger ships.

“A lot of people count on the high-quality American food products and there’s a demand for them overseas,” Sandifur said. “The challenge is getting them over there.”

German importers have struggled to get California inshell walnuts, a popular seasonal snack, into supermarkets in time for Christmas due to delays of six to eight weeks in ships leaving, said Jens Borchert of German importer Mariani of California.

California’s walnut industry exported 47% fewer nuts in the shell, and 16% fewer shelled nuts during September and October of 2021 than it did in the previous year, the California Walnut Board said in a report. Almond industry data shows a 19% drop in exports in the three months ending Oct. 31 compared with the year-ago period.

Barton says his exports were down by about 75% in October from the previous year. A key contract, to supply walnuts for the holiday season to supermarket chains in Sweden, was canceled after the nuts got held up for weeks waiting for a ship, he said.

For Dairy America, a cooperative that is the world’s largest supplier of powdered skim milk, shipping costs have increased by 30% to 40% and contracts have been canceled because of erratic shipping schedules, said Derik Toy, the Fresno group’s supply-chain director.

Last month, the cooperative had to find storage for 18 containers full of powdered milk in Arizona, after numerous scheduling changes by a shipping line contracted to take them from Los Angeles to Colombia. The cooperative will now have to pay late fees on the containers it rented to carry the milk.

Peter Friedmann, executive director of the Agriculture Transportation Coalition, said his members reported drops in exports by 22% during the first four months of 2021 alone.

The ports of Long Beach and Los Angeles, the nation’s busiest seaport complex, have dominated media coverage of supply-chain woes. But congestion has made it harder for farmers to export their goods across the nation, Friedmann said.

At the ports in Seattle and Tacoma, Washington, exports are down 11% this year and 20% off from the five-year average, said Steve Balaski, interim director of business development for the Northwest Seaport Alliance.

Three shipping services are suspending calls at the Northwest port complex in December, and ships on two other routes will reduce the frequency of stops there, he said.

The ports are the leading export locations for apples and frozen French-fried potatoes. They also ship peas, lentils and about 40% of the nation’s hay exports.

Particularly impacted, he said, are shipments bound for Europe, Latin America and parts of Asia outside of China.

“When they are unable to export it really impacts the farmers’ ability to make money,” Balaski said.