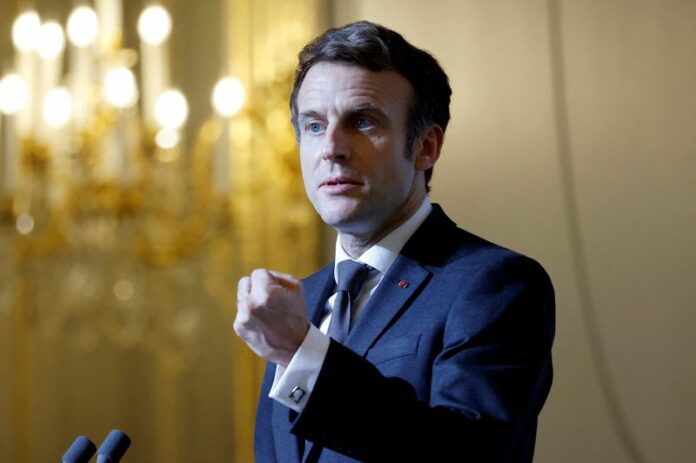 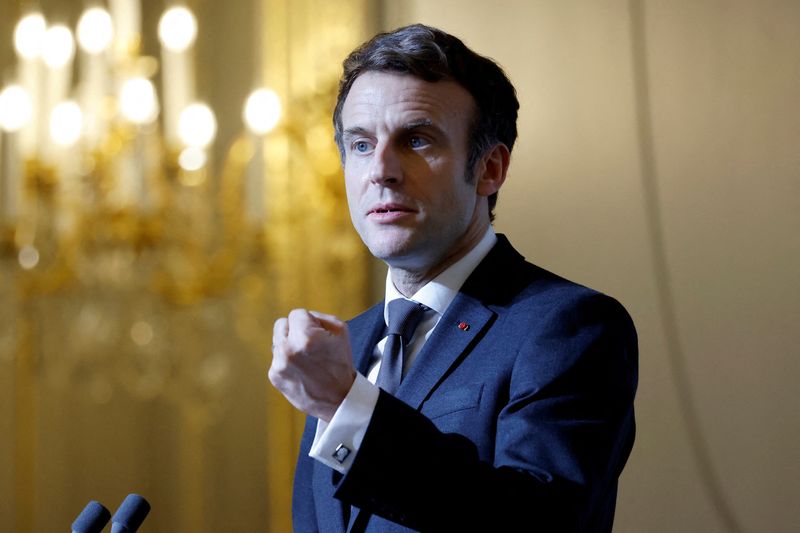 © Reuters. FILE PHOTO: French President Emmanuel Macron delivers a speech during a presentation of the traditional epiphany cake at the Elysee Palace, in Paris, France January 12, 2022. Ludovic Marin/Pool via REUTERS

CHALAMPE, France (Reuters) -President Emmanuel Macron on Monday touted 21 new foreign investment projects in France and a booming economy as proof his economic reforms have been bearing fruit less than three months before a presidential election in which he is expected to run.

During a visit to Alsace in the east, Macron inaugurated a 300-million-euro ($340 million) industrial project by German chemical giant BASF to produce high-tech nylon in France, one of 21 new projects worth 4 billion euros and 10,000 jobs as part of a drive to attract foreign investors.

As the presidential race heats up, Macron is keen to shift the debate away from immigration and law-and-order issues and put the spotlight on the economy, which has been recovering strongly from the COVID-19 pandemic.

“Our country had been de-industrialising for 15 years,” Macron told workers at the sprawling site by the Rhine river.

“Since 2019, we have started creating new industrial jobs again. This is the result of the choice we made. Our choice — it all makes sense — was to make reforms at the start of the mandate,” Macron added.

Since 2017, Macron has pushed through a cocktail of supply-side economic reforms meant to boost businesses’ competitiveness, cut taxes on investors and loosen strict labour market rules.

Critics say he has acted as “president of the rich” who wants to do away with France’s cherished social safety nets and has cut welfare benefits for some of the poorest.

But three months ahead of the April election, indicators show the French economy is booming, with growth expected to have hit 6.7% in 2021 and France having returned closer to pre-pandemic levels than any G7 peer bar the United States.

It remains to be seen whether that will translate into votes for Macron. With the spike in energy prices across Europe, households have to pay higher electricity bills, fuelling fears within the government of voter discontent.

“In fact, among major advanced economies, the star performer of the pandemic era, arguably, is … France,” he wrote in his New York Times column https://www.nytimes.com/2022/01/14/opinion/france-economy-pandemic-socialism.html.