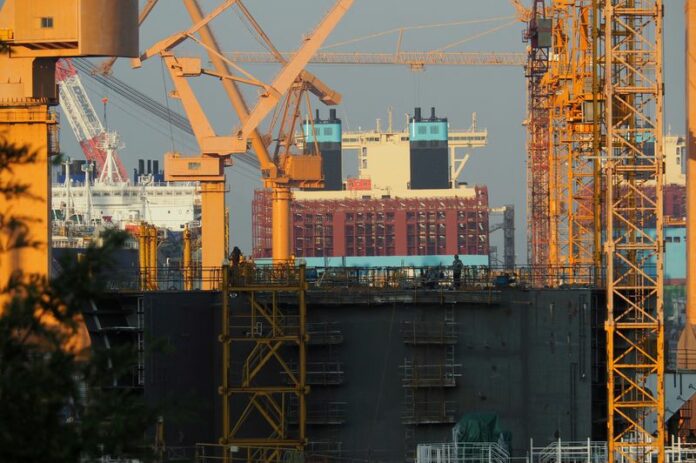 Asia’s fourth-largest economy is expected to have expanded a seasonally-adjusted 0.9% in the fourth quarter, according to the median forecast of 10 economists, up from a 0.3% rise in the preceding quarter.

However, the survey showed growth in annual terms likely slowed to a median 3.7%, based on a higher sample of 16 economists, from 4.0% in the third quarter, partly due to the above-trend expansion registered in the comparable period in 2020.

The data will be released on Jan. 25.

“It is highly probable private consumption has weakened somewhat due to the re-spread of the COVID-19 in Korea, but solid exports and investments supported growth in Q4,” said Chun Kyu-yeon, an economist at Hana Financial Investment in Seoul.

South Korea’s recovery from a pandemic-induced economic slump has been largely driven by robust exports, which expanded at their fastest pace in 11 years in 2021. By destination, exports to China, the United States and the European Union rose 22.9%, 29.4% and 33.9%, respectively.

But an upsurge in COVID-19 cases, the waning effects of pandemic-related stimulus and an economic slowdown in China, the country’s largest trade and investment partner, will weigh heavily on the economy this year and next.

“Exports have continued to be a pillar of strength, but are likely to provide a smaller boost to growth going forward. The ongoing slowdown in China poses another headwind,” wrote Krystal Tan, an economist at ANZ in Singapore.