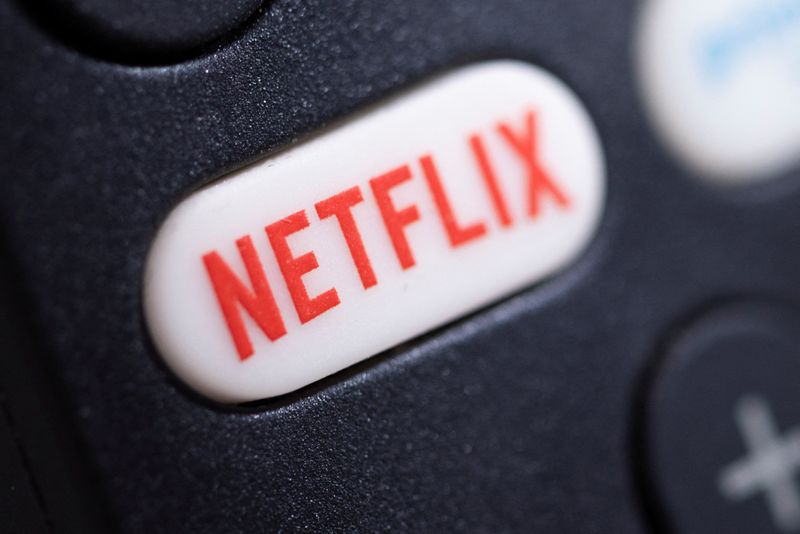 © Reuters. The Netflix logo is seen on a TV remote controller, in this illustration taken January 20, 2022. REUTERS/Dado Ruvic/Illustration

LOS ANGELES (Reuters) -Netflix Inc dashed hopes for a quick rebound after forecasting weak first-quarter subscriber growth on Thursday, sending shares sinking nearly 20% and wiping away most of its remaining pandemic-fueled gains from 2020.

The world’s largest streaming service projected it would add 2.5 million customers from January through March, less than half of the 5.9 million analysts had forecast, according to Refinitiv IBES data.

Netflix (NASDAQ:NFLX) tempered its growth expectations, citing the late arrival of anticipated content, such as the second season of “Bridgerton” and the Ryan Reynolds time-travel movie “The Adam Project.”

Netflix added 8.3 million customers from October to December, when it released a heavy lineup of new programming including the star-studded movies “Red Notice” and “Don’t Look Up” and a new season of “The Witcher.” Industry analysts had projected 8.4 million.

The company’s global subscriber total at the end of 2021 reached 221.8 million.

In a letter to shareholders, Netflix said it believed the ongoing COVID-19 pandemic and economic hardships in several parts of the world like Latin America may have kept subscriber growth from rebounding to levels seen before the pandemic.

COVID “created a lot of bumpiness” that made it hard to project subscriber numbers, “but all the fundamentals of the business are pretty solid,” Co-Chief Executive Ted Sarandos said in a post-earnings video interview.

Netflix last week raised prices in its biggest market https://www.reuters.com/technology/exclusive-netflix-raises-monthly-subscription-prices-us-canada-2022-01-14, the United States and Canada, where analysts say growth is stagnating, and is now looking for growth overseas.

The company rode a roller coaster during the pandemic, with steep growth early in 2020 when people were staying home and movie theaters were closed, followed by a slowdown in 2021. Netflix picked up more than 36 million customers in 2020, and 18.2 million in 2021.

Netflix’s subscriber growth in 2022 had been expected to stabilize and return to the pace logged before the pandemic, when it added 27.9 million subscribers in 2019, analysts say. The company’s upcoming slate includes new installments of “Ozark” and “Stranger Things” and a three-part Kanye West documentary.

“The pandemic lockdowns pulled forward tons of demand and it is taking longer than expected to normalize,” said Pivotal Research analyst Jeff Wlodarczak.

Competitors including Disney and AT&T Inc (NYSE:T)’s HBO Max, are pouring billions into creating new programming to grab a share of the streaming market.

Netflix said competition “may be affecting our marginal growth some,” but added that it was still growing in every country where new streaming options have launched.

“Even in a world of uncertainty and increasing competition, we’re optimistic about our long-term growth prospects as streaming supplants linear entertainment around the world,” Netflix said in its shareholder letter.

In their video interview, executives sought to reassure investors that Netflix’s long-term prospects were bright. Sarandos said the service had not seen a decline in customer engagement or retention and he projected the switch to streaming from traditional television would continue to open opportunities worldwide. The stock remained down nearly 20%.

“The pace of the migration may be a little hard to call from time to time when there are kind of very global events or even local conditions,” Sarandos said, “But it’s absolutely happening. There’s no question of that.”

The company is looking for new ways to attract customers including with mobile video games. Netflix said it released 10 games in 2021, was pleased with the early reception and would expand its gaming portfolio in 2022.