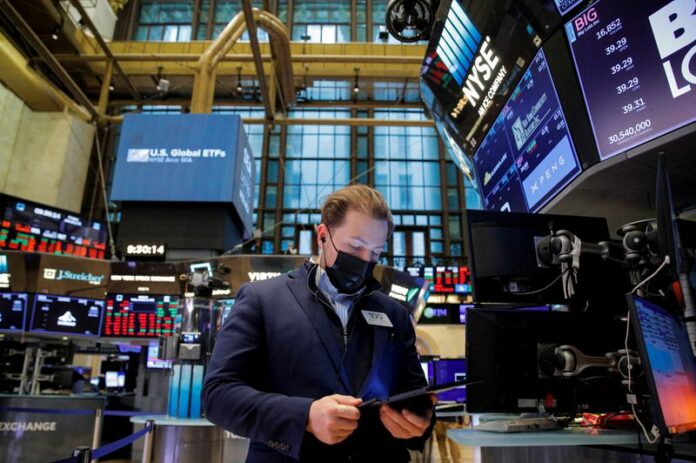 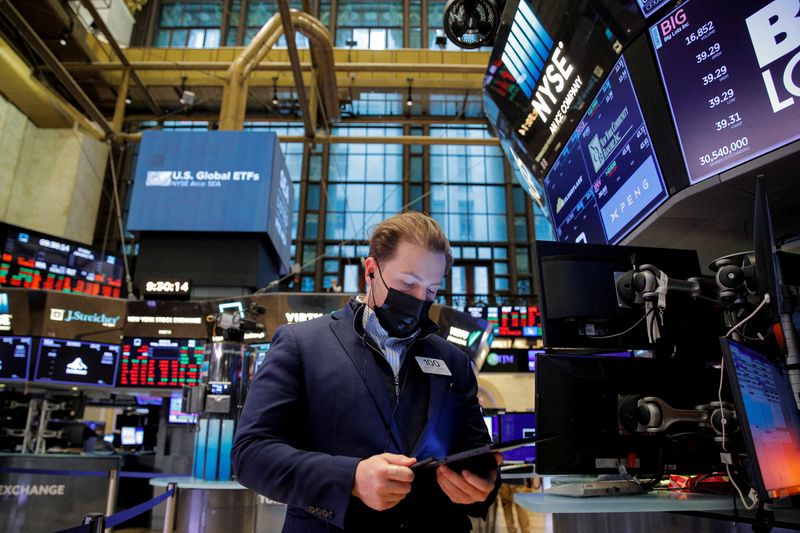 NEW YORK (Reuters) – Wall Street bounced back from a steep sell-off late in the session to close higher on Monday, with bargain hunters pushing the indexes into positive territory by closing bell.

The S&P 500 earlier came close to confirming a correction by appearing on track to close more than 10% down from its most recent all-time high reached on Jan 3 as investors focused on concerns about an increasingly hawkish Federal Reserve and geopolitical tensions.

The S&P 500 recovered 4.3 percentage points from its session low to it closing level, the largest such swing since March 26, 2020, when Wall Street was bouncing back from the global slump caused by the coronavirus pandemic.

Earlier in the day, the indexes were all more than 2% lower. The S&P appeared to be on course to confirm a correction, and the Russell 2000 looked as if it would confirm it was in a bear market.

This abrupt, late-session U-turn came in the wake of S&P 500 and the Nasdaq suffering their largest weekly percentage plunge since March 2020, when shutdowns to contain the pandemic sent the economy spiraling into its steepest and most abrupt recession on record.

“Correction territory is often a psychological sweet spot for investors. They see the correction, and they see that it’s a healthy part of the markets,” said Jake Dollarhide, chief executive officer of Longbow Asset Management in Tulsa, Oklahoma.

“When everything started selling off, that got a lot of people’s attention, so I think we had what I would call intraday capitulation, getting some of this easy money out of the market,” Dollarhide added.

The U.S. Federal Reserve is due to convene its two-day monetary policy meeting on Tuesday, and market participants will be parsing its concluding statement and Chairman Jerome Powell’s subsequent Q&A session for clues as to the central bank’s timeline for hiking key interest rates to combat inflation.

“I think investors are over-assuming a very hawkish stance by the Fed,” said Sam Stovall, chief investment strategist of CFRA Research in New York. “Granted, inflation is high and is likely to get higher before it starts to decline. Specifically we see the headline CPI topping at 7.3% for both January and February, but then coming down to 3.5% by year-end.”

In a sign that geopolitical tensions are heating up, NATO announced it was putting forces on standby to prepare for a potential Russian invasion of Ukraine.

The threat of potential conflict in that region helped U.S. Treasury yields dip, pausing their recent upward climb, which has pressured stocks in recent months.

All 11 major sectors of the S&P 500 spent most of the trading day deep in red territory, but by market close all but three were green. Consumer discretionary enjoyed the largest percentage gain.

Fourth-quarter reporting season is in full swing, with 65 of the companies in the S&P 500 having posted results. Of those, 77% have come in above expectations, according to data from Refinitiv.

A series of disappointing earnings from big banks and, notably, lockdown darling Netflix Inc (NASDAQ:NFLX) have overshadowed many better-than-expected results.

Shares of International Business Machines (NYSE:IBM) gained more than 6% in after-hours trading after the company beat revenue expectations on the strength of its cloud and consulting businesses.

Declining issues outnumbered advancing ones on the NYSE by a 1.49-to-1 ratio; on Nasdaq, a 1.08-to-1 ratio favored decliners.

Volume on U.S. exchanges was 18.42 billion shares, compared with the 10.95 billion average over the last 20 trading days.