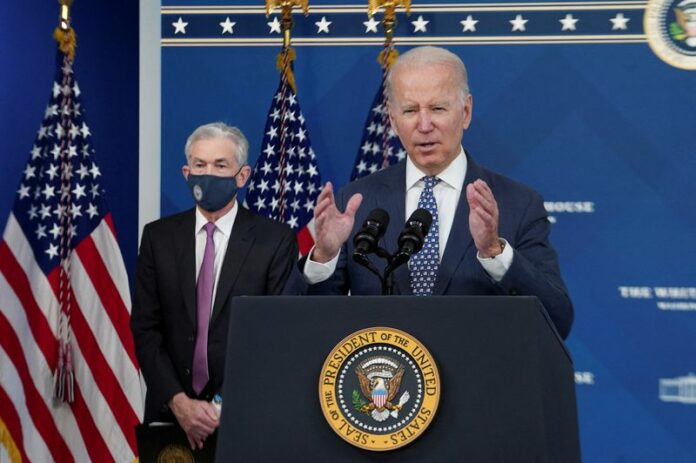 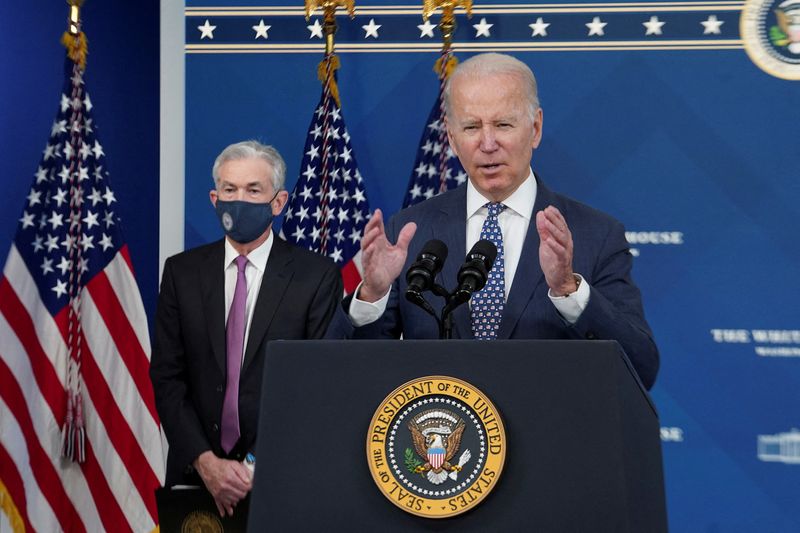 (Reuters) – U.S. central bankers on Tuesday will open their first meeting of the year already in broad agreement that they need to raise interest rates soon, likely in March, to slow the economy.

They are likely not to hear a peep about it from the White House.

The silence marks a sharp reversal for the Federal Reserve and its chair, Jerome Powell. His four interest rate hikes in 2018 drew blistering criticism from President Donald Trump, who had just installed Powell atop the Fed and felt they undercut Trump’s own efforts to bolster economic growth. Trump waged a public pressure campaign to stop them.

President Joe Biden by contrast has endorsed what the Fed has signaled will be at least three interest rate hikes this year and a rapid shrinking of its nearly $9 trillion balance sheet to further raise borrowing costs. Last week Biden called Powell’s retooling of policy “appropriate” and emphasized the decision to do so was up to the Fed.

So why the difference? Contrasting presidential styles aside, it comes down to one thing: inflation.

In Trump’s four-year term consumer prices mostly rose around a 2% annual pace and never faster than 3%. In Biden’s first year alone they shot up 7% as demand for everything from cars to hamburgers far outpaced the economy’s ability to fulfill it.

“Biden understands that the Fed’s performance will influence the course of the economy and thus help to shape his and the Democrats’ electoral fortunes,” said George Washington University’s Sarah Binder, author of a 2017 book on Fed governance.

The higher prices are eating in to paychecks and outpacing strong wage growth as businesses try to woo workers after pandemic shutdowns and dislocations.

They are also tanking Biden’s approval ratings https://www.reuters.com/world/us/biden-approval-rating-drops-43-lowest-his-presidency-2022-01-20 and have generated comparisons to the 1970s, when President Gerald Ford tried to force businesses into holding the line on prices and his successor Jimmy Carter appointed an inflation hawk – Paul Volcker – to finally end the upward spiral.

So, far from fighting the Fed’s pivot to tighter policy, Biden is in fact betting on it.

If things go right, the Fed’s raising rates from current near-zero levels will slow demand by making it more expensive to borrow and tempering spending impulses among consumers and businesses.

Powell says the economy is strong enough https://www.reuters.com/article/usa-fed-powell-idCNL1N2TR1FJ to handle it and in fact will not be able to grow at its full potential if inflation stays high for too long and gets entrenched in business and household psychology.

He also hopes for help in areas he cannot control – supply chains and the pandemic. If supply chains get untangled, businesses can obtain needed parts and materials more easily, reducing upward price pressure. And if the pandemic eases, more workers who stayed out of the job market because of health concerns or childcare burdens may return, reducing upward wage pressure.

But in backing Powell, Biden also risks a potentially toxic mix – a Fed that is tightening policy just as government aid that bolstered demand last year drops off, and supply chains that remain tangled. Tensions on the Russian-Ukraine border could add to the uncertainty.

And that could mean a scenario where the Fed ends up tightening policy more than the economy can tolerate.

FED CREDIBILITY ON THE LINE

Biden, who renominated Powell for a second term starting next month, is betting that Powell will pull it off, raising rates fast enough keep inflation from getting entrenched but not so fast they bring economic growth to a standstill.

“If there’s no ‘soft landing,’ a recession would put Biden in even greater electoral danger,” Binder said.

Meanwhile Biden and Treasury Secretary Janet Yellen are trying to resurrect his stalled spending plans aimed at lowering the cost of childcare and enabling more working parents to rejoin the workforce, among other things. They also hope to fix failed supply chains blamed for driving prices higher.

Still, it is not clear that their efforts will pay off, and if the slow rate hikes the Fed has so far signaled will be enough to tamp down inflation.

“If the (Fed) wants to be a more active contributor to bringing down inflation – as opposed to playing a more limited role and mainly waiting for the effects of pandemic supply-demand imbalances and fiscal stimulus to fade – then it will need to do enough to tighten financial conditions materially,” Goldman Sachs (NYSE:GS) economists wrote earlier this month.

That, they wrote, could mean four or more rate hikes this year.

There will be two months more of inflation data before the Fed’s March meeting, enough to show whether it is cooling on its own as policymakers repeatedly but wrongly forecast it would last year.

If inflation continues to run hot, the Fed may not only need to do more rates hikes, but may need to deliver them earlier, wrote SGH Macro Advisors’ Tim Duy.

“This is especially the case given the growing political costs of inflation,” said Duy, noting that the political risk is not just for the Biden administration, but also for the Powell Fed.

“Its credibility with the public and on Capitol Hill requires that it meet its mandate” of 2% inflation on average, Duy wrote.