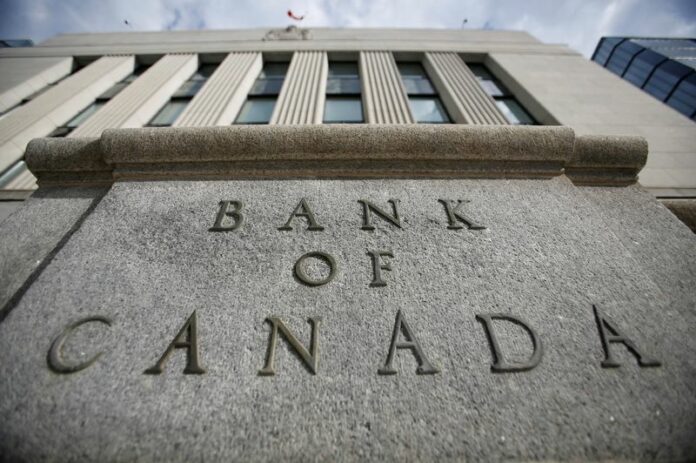 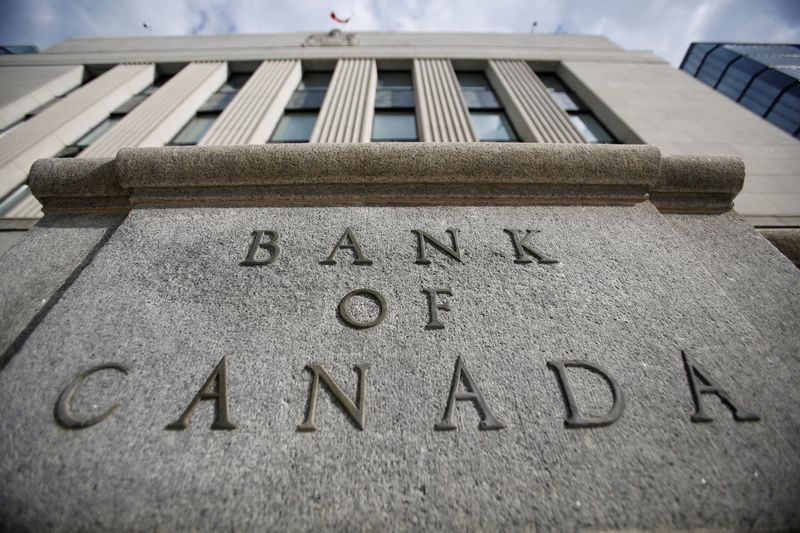 © Reuters. FILE PHOTO: A sign is pictured outside the Bank of Canada building in Ottawa, Ontario, Canada, May 23, 2017. REUTERS/Chris Wattie/File Photo

TORONTO (Reuters) – The Canadian bond market is coming to the view that expected multiple interest rate hikes in 2022 by the Bank of Canada, including one potentially this week, will bring price pressures under control, albeit at a cost of slower economic growth.

This marks a shift in perception that is underscored by moves in the so-called inflation breakeven rate, a market measure of inflation expectations. The 10-year breakeven rate has dropped below 1.9% this month after touching 2.3% in November, its highest level by far in data going back to 2015.

In contrast, recent survey data https://www.reuters.com/world/americas/firms-see-increasing-labor-shortages-wage-pressures-bank-canada-survey-2022-01-17 from the Canadian central bank showed that expectations for price increases among consumers and businesses have climbed.

Lowering of inflation expectations give businesses greater confidence to pursue their growth plans.

“With the market pricing in an aggressive Bank of Canada tightening cycle, it implies that inflation is less likely to remain elevated in future years,” said Andrew Kelvin, chief Canada strategist at TD Securities.

Money markets see a 65% chance that Canada’s central bank will raise its benchmark interest rate, which currently sits at 0.25%, in a policy announcement on Wednesday despite uncertainty triggered by the Omicron variant of the coronavirus. It would be the first rate hike https://www.reuters.com/world/americas/even-omicron-slams-canada-bets-january-rate-hike-rise-2022-01-18 since October 2018.

Investors expect six hikes in total this year, which would lift the policy rate to its pre-pandemic level of 1.75%. The expected number of increases is up from four in December and two more than markets expect from the Federal Reserve.

The urgency that the market sees for the BoC to start tightening comes as Canadian inflation, which hit a 30-year high of 4.8% in December, threatens to overshoot the central bank’s 2% target for longer by feeding expectations for future price increases.

Signs of an overheated Canadian housing market could also concern the central bank after data for December showed the average selling price of a home was up nearly 18% from a year earlier.

But the potential for an easing in supply-chain disruptions later this year could reduce price pressures, say economists, while past increases in energy prices will fall out of the inflation calculation over time.

Bank of Canada Governor Tiff Macklem said in December that slack in Canada’s economy caused by the coronavirus pandemic has substantially diminished, a key sign the central bank would begin hiking rates soon. The Fed has also turned more hawkish.

Both central banks tend to raise rates in 25-basis-point increments but could move faster.

Some time after the first hike, the BoC is expected to begin quantitative tightening, or QT, reducing the amount of bonds on its balance sheet that were bought during the pandemic to support the economy.

The combination of QT and rate hikes could weigh on economic activity, particularly after Canadians increased borrowing during the pandemic.

But employment has climbed above its pre-pandemic level and people have accumulated an unprecedented amount of savings.

Economists estimate that the increase in savings over the pre-pandemic trend could be nearly C$300 billion, or about 20% of annual spending.

Tightening “doesn’t need to imply a painful economic period,” Kelvin said. “It means that the period of above-trend growth probably comes to an end in the next two years.”