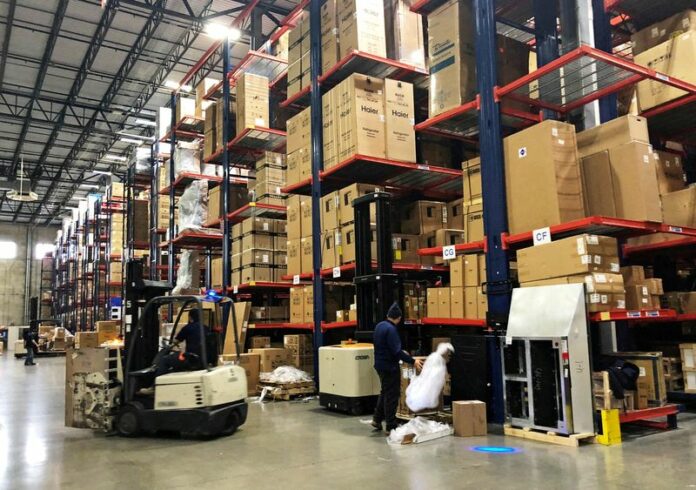 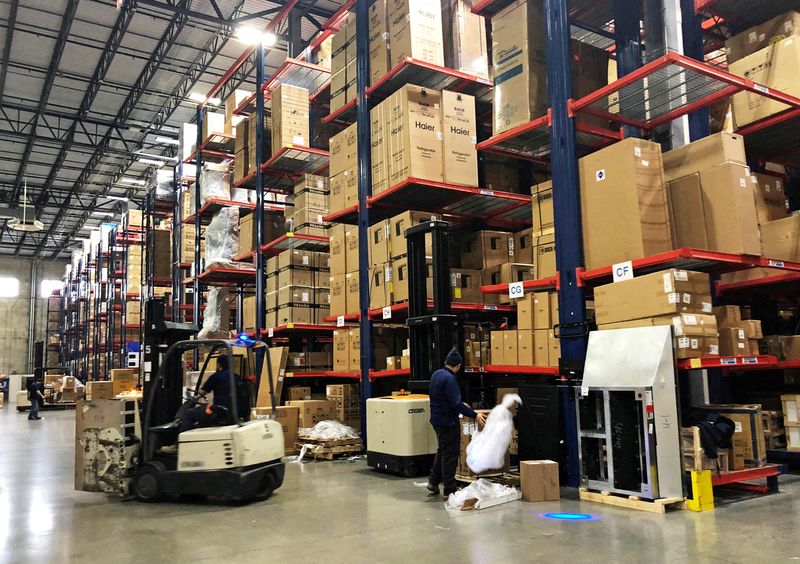 © Reuters. FILE PHOTO: Warehouse workers deal with inventory stacked up to the ceiling at an ABT Electronics Facility in Glenview, Illinois, U.S. December 4, 2018. REUTERS/Richa Naidu/File Photo

WASHINGTON (Reuters) – The U.S. economy notched its strongest growth in nearly four decades in 2021 after the government injected trillions of dollars in COVID-19 relief, and is seen soldiering on this year despite headwinds from the pandemic, strained supply chains as well as high inflation.

Fed Chair Jerome Powell told reporters on Wednesday after a two-day policy meeting that “the economy no longer needs sustained high levels of monetary policy support,” and that “it will soon be appropriate to raise” rates.

The sharp rebound in growth last year could offer some cheer for President Joe Biden whose popularity is falling amid a stalled domestic economic agenda after the U.S. Congress failed to pass his signature $1.75 trillion Build Back Better legislation. It, however, could diminish prospects of more money from the government. The government pumped nearly $6 trillion in pandemic relief.

“While Omicron will lead to weaker growth in the first quarter, activity is expected to rebound nicely once the latest pandemic wave abates and supply-chain glitches ease,” said Sal Guatieri, a senior economist at BMO Capital Markets in Toronto.

“The Fed will need to be ‘humble and nimble’ as it navigates underlying economic strength, worsening labor shortages, and stubbornly high inflation.”

The economy grew 5.7% in 2021, the strongest since 1984. It contracted 3.4% in 2020, the biggest drop in 74 years. The stunning reversal came as gross domestic product increased at a 6.9% annualized rate in the fourth quarter. That followed a 2.3% growth pace in the third quarter.

Economists polled by Reuters had forecast GDP growth rising at a 5.5% rate last quarter. Estimates ranged from as low as a 3.4% rate to as high as a 7.0% pace.

The momentum, however, appears to have faded by December amid an onslaught of COVID-19 infections, fueled by the Omicron variant, which contributed to undercutting spending as well as disrupting activity at factories and services businesses.

Inventory investment increased at a $173.5 billion rate, contributing 4.90 percentage points to GDP growth, the most since the third quarter of 2020. Businesses had been drawing down inventories since the first quarter of 2021.

Spending shifted during the pandemic to goods from services, a demand boom that pressured supply chains. Excluding inventories, GDP grew at a moderate 1.9% rate.

Growth last quarter was also lifted by a jump in consumer spending in October before retreating considerably as Omicron spread across the country. Consumer spending, which accounts for more than two-thirds of economic activity, grew at a 3.3% rate after rising at a 2.0% pace in the third quarter.

It has been hampered by shortages of motor vehicles and other goods. A global chip shortage is hurting production.

Reduced household purchasing power, with inflation way above the Fed’s 2% target, also hindered consumer spending at the tail end of the fourth quarter.

Support to GDP growth last quarter also came from business spending on equipment, which rebounded after being held back in the July-September period by shortages of trucks.

Trade made no contribution after being a drag on GDP growth for five straight quarters, while investment in homebuilding contracted for a third consecutive quarter. The sector is being constrained by expensive building materials, which has resulted in a record backlog of homes yet to be built.

There are, however, signs that the impact from the Omicron-driven outbreak in infections is easing. A separate report from the Labor Department on Thursday showed initial claims for jobless benefits dropped 30,000 to a seasonally adjusted 260,000 during the week ended Jan. 22.

Claims shot up to a three-month high in early January. Unadjusted claims tumbled 73,357 to 267,573 last week. There were sharp declines in Illinois, Kentucky, Texas, New Jersey, New York as well as Pennsylvania.

The labor market is viewed as being at or close to maximum employment. Employers are desperate for workers, with 10.6 million job openings at the end of November.

Though the economy appears to have hit a soft patch in the first quarter because of challenges from the never-ending pandemic, the worst inflation in decades, supply chain bottlenecks and upcoming interest rate increases, a pickup is anticipated by the second quarter.

Growth estimates for the year are as high as 3.9%.

“We see the economy continuing to grow above its natural speed limit through this year amid still-solid demand, a need to replenish severely depleted inventory levels and manufacturers’ obligation to meet record levels of backlogged orders,” said Sam Bullard, a senior economist at Wells Fargo (NYSE:WFC) in Charlotte, North Carolina.