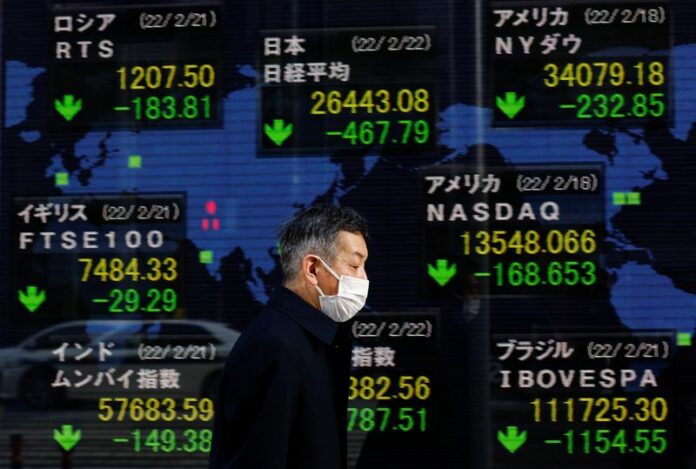 European shares edge up ahead of ECB meeting

LONDON/BEIJING (Reuters) – Stock markets made slim gains on Thursday ahead of a European Central Bank meeting that could herald tighter policy, as U.S. Treasury yields eased and the dollar retreated on hopes that inflation may be close to peaking.

Traders were waiting for a European Central Bank meeting for possible clues on a clearer schedule for unwinding its extraordinary stimulus, as worries over record-high inflation trump concerns about a war-related recession.

A string of central banks across the world have tightened policy as they struggle to rein in spiralling inflation. On Thursday the Bank of Korea surprised markets with a rate hike and the Monetary Authority of Singapore also tightened policy.

Still, opinion was mixed among market players on how hawkish the ECB would be. Some predicted that it would signal tighter policy without necessarily taking tough action.

“The risk of a hawkish surprise from the ECB is quite clear,” said Hugh Gimber, global market strategist at J.P. Morgan Asset Management.

New Zealand’s central bank raised interest rates by a hefty 50 basis points on Wednesday, the biggest hike in over two decades. The Bank of Canada also raised rates by the same level, making its biggest single move in more than two decades and flagging more hikes to come.

Borrowing costs in the euro area’s battered sovereign bond markets crept back up before the ECB meeting. The German 10-year bond yield was up 2 basis points at 0.79% in early trade, near the highest levels since July 2015 hit early this week.

Hopes that U.S. inflation may have peaked led U.S. Treasury yields to extend their decline, with the dollar also falling.

The yield on 10-year Treasury notes was at 2.6636%, compared to a three-year peak of 2.836%, before data on Tuesday that showed inflation running less than investors had feared.

Major European and U.S. markets, along with those in Asia, are on holiday on Friday for the long Easter weekend.

As U.S. yields paused their march higher, the dollar fell from a two-year peak hit a day earlier.

The euro rose 0.2% ahead of the ECB meeting to $1.0910, although it was not too far from its 1-month low on concerns about the war in Ukraine.

Retreating U.S. yields also offered some relief to the bruised yen on Thursday, with the safe haven currency up 0.3% against the greenback. It had weakened past the 126 yen per dollar mark in the previous session.

The prospect of fast and aggressive U.S. interest rate hikes and growing market expectations that the Bank of Japan will keep rates ultra-low in the near term have weakened the yen.

Oil prices slipped amid thin trading volumes ahead of the Easter break, as traders weighed a larger-than-expected build in U.S. oil stocks against tightening global supply. Brent futures were down $0.98, or 0.9%, at $107.80 a barrel.