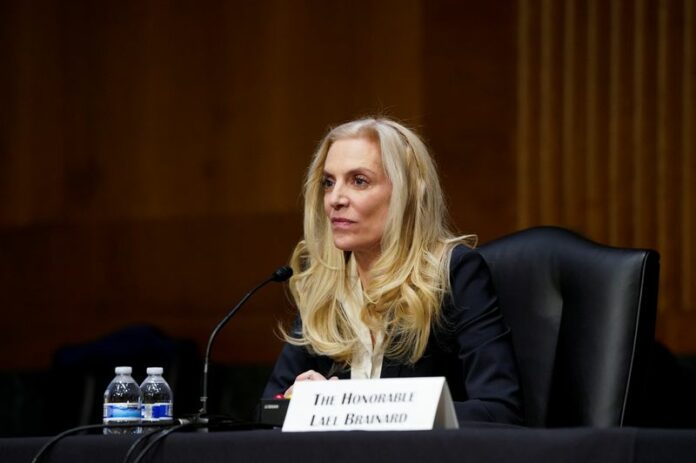 © Reuters. FILE PHOTO: Federal Reserve Board Governor Lael Brainard testifies before a Senate Banking Committee hearing on her nomination to be vice-chair of the Federal Reserve, on Capitol Hill in Washington, U.S., January 13, 2022. REUTERS/Elizabeth Frantz/File Ph

By Dan Burns and Ann Saphir

(Reuters) – U.S. central bankers are split on whether high inflation will be a recurring problem in the future requiring repeated rate hikes, comments from two officials showed on Tuesday, a stark contrast to their broad consensus on the current policy path.

Separate remarks from Federal Reserve Governor Lael Brainard and Richmond Fed President Thomas Barkin on the post-pandemic outlook showed an emerging rift in the views of Fed leaders, who all currently see the need to raise interest rates aggressively this year.

How that debate shapes up could bend the path of Fed policy for years to come.

Speaking in a Wall Street Journal interview, Brainard said that bringing inflation back down toward the Fed’s 2% goal is the central bank’s “most important task” but was confident a series of interest rate hikes and a reduction in the Fed’s massive bond holdings would achieve that.

She said she was encouraged that core inflation, which excludes energy and food, was starting to moderate, even as headline price increases ran at their highest since 1981. She said she expected demand — and inflation — to cool in coming months as the Fed “expeditiously” raises rates.

But once the economy moves beyond price pressures from pandemic-constrained supply and Russia’s invasion of Ukraine, “there are good reasons to think” that the economic picture will reset closer to pre-pandemic norms, she added.

Low inflation was, for the two decades before the pandemic, a bigger threat than high inflation. Persistent downward pressure on prices from an aging population, slow growth and globalization forced the Fed to keep interest rates low for much of that time. Some critics say that experience shaped what they view as the Fed’s too-slow response to high inflation this time around.

He said upward price pressures could stick around if firms remake supply chains more resistant to potential disruptions, but also more costly, and governments spend on benefits for an aging population or on defense.

Labor constraints from slowing population growth could also add to these pressures.

If bouts of high inflation become more common in the future than they were pre-pandemic, Barkin said, “our efforts to stabilize inflation expectations could require periods where we tighten monetary policy more than has been our recent pattern.”

For now, though, Barkin said the task is clear: to quickly raise interest rates to a neutral level, estimated to be around 2.4%.

“The best short-term path for us is to move rapidly to the neutral range and then test whether pandemic-era inflation pressures are easing, and how persistent inflation has become,” he said, speaking remotely at a Money Marketeers event in New York. “If necessary, we can move further.”