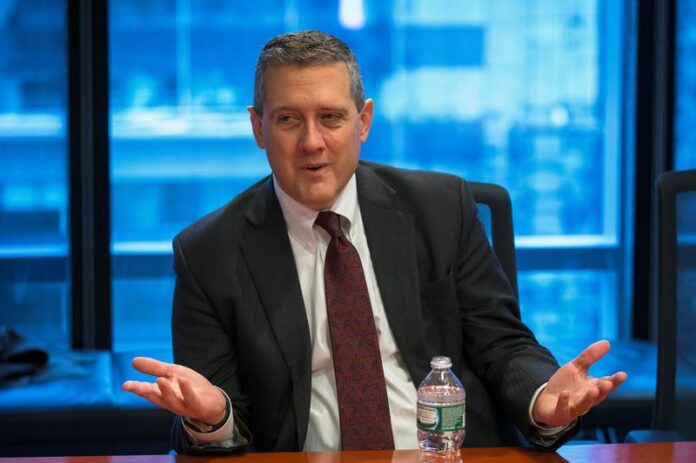 (Reuters) -The U.S. Federal Reserve must put the brakes on economic activity to tackle surging prices, James Bullard, president of the St. Louis Fed, told the Financial Times in an interview https://on.ft.com/3uBKcZZ.

It is a “fantasy” to think the Fed can tame the fastest U.S. inflation in four decades without aggressively raising interest rates, he said.

“We have to put downward pressure on the component of inflation that we think is persistent,” the paper quoted him as saying, making a call for rates to rise to a level that curtails growth.

U.S. officials estimate the “neutral” level for the federal funds rate to be around 2.4%. Bullard in comments to reporters last week said he would like to see the policy rate raised to 3.5% by year’s end, a goal that would require half-point rate increases at each of the Fed’s six remaining meetings this year.

Fed officials are largely aligned around the need for steady rate increases this year.

But there is division nonetheless about how to view incoming inflation data, and whether a series of larger, half-point increases will be warranted.

A report Tuesday showed consumer prices rose 8.5% over the last 12 months, but some policymakers noted that inflation among a key set of goods appeared to be slowing, a sign overall inflation also may be peaking.

Bullard told the Financial Times that, to the contrary, the latest data “underscores the urgency that the Fed is behind the curve and needs to get moving.”