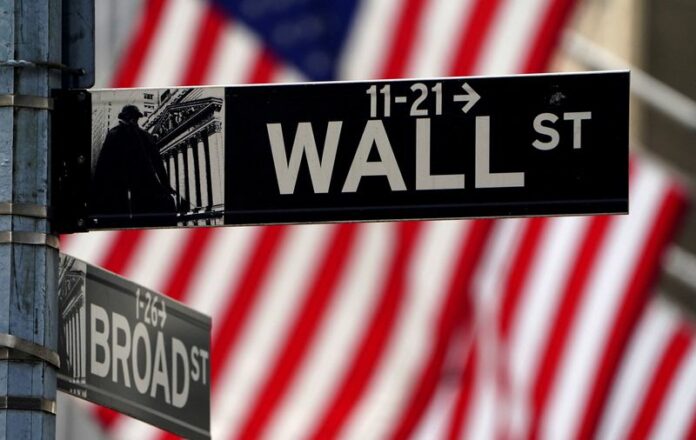 (Reuters) – The Nasdaq and the S&P 500 fell on Thursday as rising yields weighed on megacap growth stocks, while a slew of Wall Street lenders reported mixed earnings on the last day of a holiday-shortened week.

Megacap growth names such as Amazon.com Inc (NASDAQ:AMZN) and Apple Inc (NASDAQ:AAPL) fell about 1% each as Treasury yields rose after data showed initial claims for state unemployment benefits were higher than expected, while the rise in retail sales was just shy of estimates. [US/]

Growth stocks have been hammered in the last few weeks as Treasury yields rallied on signals from the U.S. Federal Reserve that it will hike rates aggressively to control soaring inflation.

Morgan Stanley (NYSE:MS) and Citigroup Inc (NYSE:C) rose 1% each on beating analyst expectations for profit despite a sharp drop in first-quarter earnings.

“The banks reflect some of the concerns that investors have with the market in general,” said Rick Meckler, partner at Cherry Lane Investments in New Vernon, New Jersey.

“The inflation has helped them on the revenue side, but hurt them on the cost side … when you consider the types of reserves they feel they need to take, they’re not producing the bottom line growth that markets become very addicted to.”

Overall, analysts have been less optimistic about earnings this quarter amid the ongoing war in Ukraine, soaring inflation and a more hawkish Fed.

Aggregate annual S&P 500 earnings growth for the first three months of 2022 is estimated at 6.3%, compared to 32.1% in the previous quarter, according to IBES data from Refinitiv.

U.S. retail sales increased in March, mostly boosted by higher gasoline and food prices, but consumers are showing signs of cutting back on discretionary spending amid high inflation.