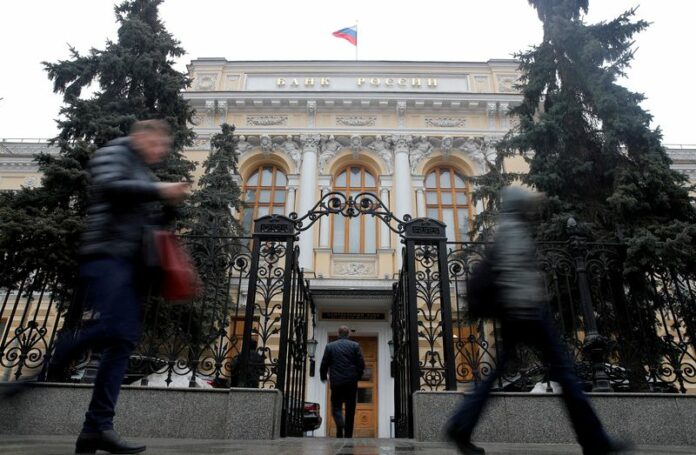 It will present new economic forecasts to coincide with its next rate-setting meeting on April 29, TASS news agency quoted him as saying.

The bank raised the key rate to 20% in an emergency move in late February before cutting it to 17% last week.

Inflation in Russia could reach 17%-20% this year and the economy may contract by more than 10%, its deepest fall since 1994, according to Alexei Kudrin, the head of Russia’s audit chamber and a former finance minister.

After the emergency rate hike, capital controls and other measures put in place by the central bank, weekly inflation fell to 0.66% in the latest week, having grown by an average of 2% since Moscow sent troops into Ukraine.

“The pace of price growth is still significantly higher than the inflation target but it is slowing down step by step,” Zabotkin said. “This gives us an opportunity to start gradually reducing the key rate.”

Weekly price growth of 0.1% equals the central bank’s annual inflation target of 4%, Interfax quoted him as saying. The speed of future rate cuts will also be determined by the further normalisation of risks to financial stability, he added.

Year on year, inflation accelerated to 16.69% in March from 9.15% in February, and the central bank currently expects inflation will return to its target in 2024.

During the first days of what Moscow calls a “special military operation” in Ukraine, Russians withdrew billions from their accounts, in roubles as well as euros and dollars, before the central bank introduced its curbs.

On one day, “nearly a yearly level of cash was withdrawn” from banks, central bank first deputy chairwoman Ksenia Yudayeva was quoted as saying by Interfax.

According to Zabotkin, the liquidity situation has stabilized and a significant part of the cash withdrawn has been returned to bank accounts.

The central bank lost its ability to support the rouble after western sanctions froze nearly a half of its gold and forex reserves of $640 billion. Russia asked its exporting companies to sell 80% of their forex revenue on the market – a rule it is now preparing to ease.

Asked whether the central bank had forecast the freeze, a sensitive issue which put its leadership under the fire, Yudayeva said on Thursday: “What has happen was unprecedented… Everyone told us that such probability was very low.”

Her boss, Governor Elvira Nabiullina, was proposed by President Vladimir Putin to serve another term and parliament is set to vote for the proposal on April 20.