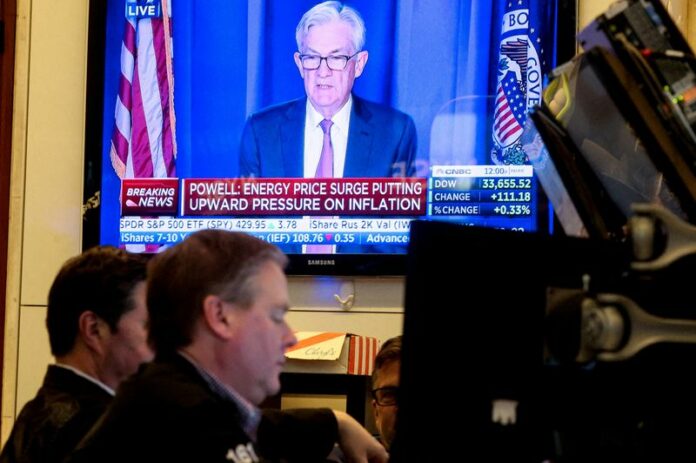 The game is afoot: central banks ramp up inflation fight 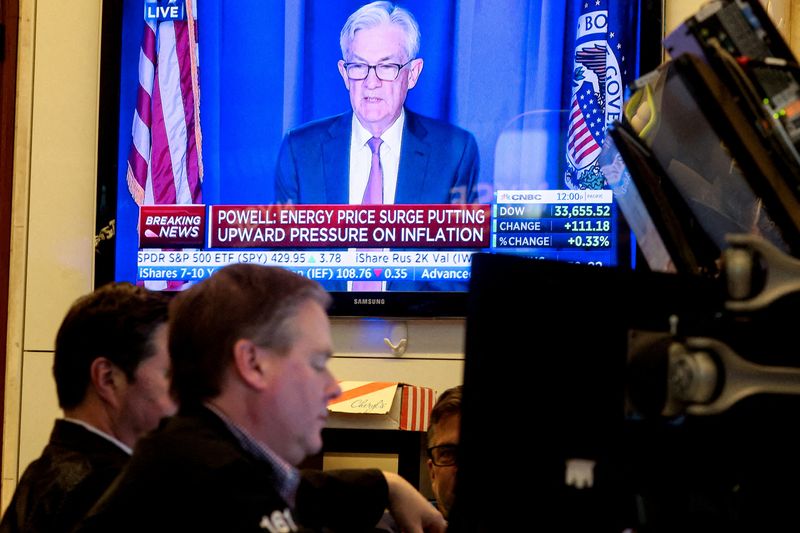 LONDON (Reuters) – Central banks are racing to get on top of surging inflation, with New Zealand and Canada delivering aggressive half-point rate hikes this week and the ECB on Thursday sticking with plans to dial back stimulus this year.

But policymakers must also, while watching inflation, guard against the fallout from the war in Ukraine. The hit to consumer confidence from higher energy prices and disrupted supply chains might well darken the economic outlook, constraining monetary tightening.

Here is a look at where policymakers stand on the path out of the pandemic-era stimulus, ranked in terms of hawkishness.

Graphic: The rate hiking cycle is off – https://fingfx.thomsonreuters.com/gfx/mkt/akvezjbkwpr/rates1404.PNG

The Norges Bank hiked rates by 25 basis points to 0.75% on March 24 and announced plans to hike at a faster pace than previously planned.

Including the March move, the bank now plans eight hikes to bring rates to 2.50% by end-2023, three more than projected in March, and two more than anticipated in March by a Reuters poll.

The Reserve Bank of New Zealand on Wednesday reinforced its position as one of the world’s most hawkish central banks.

It raised the cash rate by 50 bps to 1.5%, the biggest rise in two decades and the fourth hike in the current cycle, and maintained its forecast for rates to peak around 3.35% by end-2023.

Having kicked off its rate-rise cycle in March, the Bank of Canada raised key rates on Wednesday by 50 bps to 1%, its biggest single move in more than two decades.

From next week, the BoC will also let maturing bonds roll off its balance sheet. BoC Governor Tiff Macklem reckons rates are still far below neutral levels, estimated between 2%-3%. Markets expect rates will hit 2.5% by year-end.

Graphic: Canada most certainly in the hawkish camp – https://fingfx.thomsonreuters.com/gfx/mkt/znpneqwrqvl/CANADA.PNG

With inflation at a 30-year high, the Bank of England is under pressure to tighten policy further after three hikes since December.

However, with soaring energy prices threatening growth, the BoE has softened its language on the need for further tightening.

The Federal Reserve raised rates by a quarter point in March to a 0.25%-0.5% range and has flagged a half-point move on May 4. It is also discussing trimming its asset portfolio.

Markets’ campaign to get the Reserve Bank of Australia to pivot hawkish succeeded on April 5, when it finally opened the door for its 0.1% cash rate to rise this year.

Data later this month is expected to show annual inflation at 3.2%, while a survey published on April 12 showed robust business conditions with the jobless rate possibly dropping below 4% this year for the first time since the 1970s.

Futures price a 25 bps hike in June and imply a cumulative 200 bps of tightening by year-end.

The European Central Bank is among the most cautious of major central banks. On Thursday, it stuck to plans to slowly unwind extraordinary stimulus, weighing worries over record-high inflation against the risk that the war in Ukraine could drive the euro zone economy into recession.

Economists still expect the ECB to hike rates later this year and markets price around 60 bps of tightening by year-end.

Sweden’s 6.1% inflation, the highest since 1991, may leave the dovish Riksbank no choice but turn into a hawk.

The bank will have to rethink its policy approach at its next meeting on April 28, deputy governor Martin Floden said last week. Governor Stefan Ingves, whose vote in February was the decider in keeping balance sheet plans unchanged this year, has made similar comments recently.

The Swiss National Bank remains in the dovish camp but with 2022 inflation projected at an above-target 2.1%, it is paying closer attention to prices.

Flight to safety sparked by the Ukraine conflict has forced the SNB to step up currency intervention, boostin Swiss sight deposits by 8 billion Swiss francs ($8.58 billion) in the past three weeks.

The Bank of Japan remains the holdout dove.

With policy tightening a long way off, traders have ramped up bets on a weaker yen, driving it to two-decade lows against the dollar and eliciting a rare warning from its finance minister.