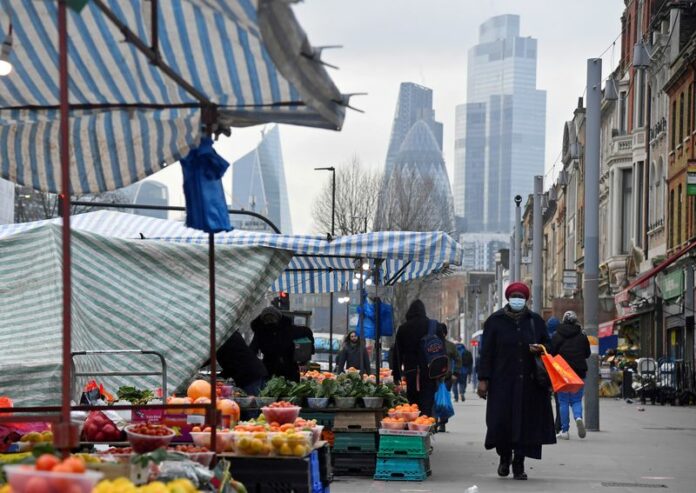 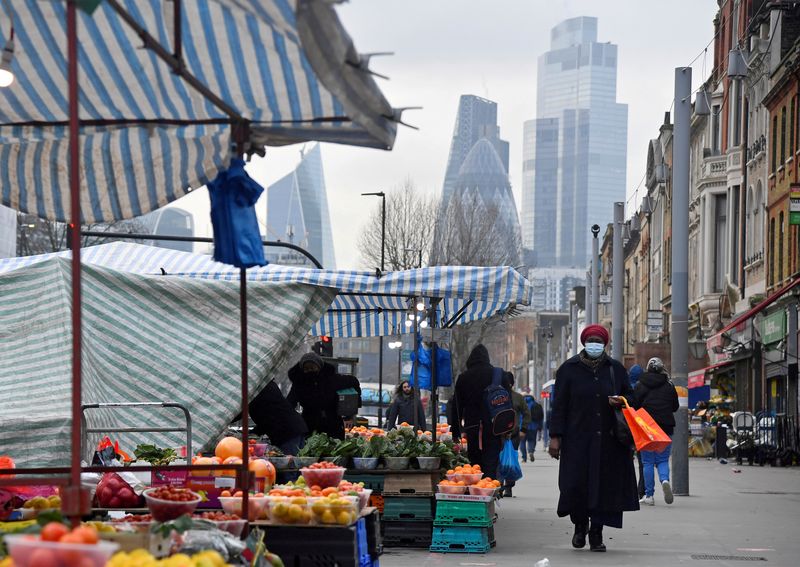 LONDON (Reuters) -British consumers spent more in early April, partly due to soaring fuel prices, but fewer people left their homes to go to work, shop or socialise, raising the prospect of an economic slowdown caused by a cost-of-living squeeze.

Weekly credit and debit card data showed spending in the week to April 7 was 2 percentage points higher than the week before, though this was not adjusted for seasonal factors or inflation.

The Office for National Statistics said overall spending was 6% higher than in February 2020, before the COVID-19 pandemic, while average prices have risen by more than 8% since then.

Consumer price inflation has picked up sharply over the past year and last month, budget forecasters predicted it would reach nearly 9% by the end of the year, ushering in the biggest cost-of-living squeeze since records began in the late 1950s.

The Bank of England expects growth to slow sharply this year as households’ disposable income drops in real terms.

The most recent rise in spending was led by a 6-percentage-point week-on-week increase in ‘work-related’ spending, which includes the cost of fuel for commuting, the ONS said, while spending on socialising was up by 4 percentage points too.

The higher spending figures, which come from interbank CHAPS payments data collected by the BoE, contrast with a fall in the number of Britons visiting places of work, shops and restaurants over the same period.

Google (NASDAQ:GOOGL) Mobility figures published by the ONS showed a 4% week-on-week drop in visits to workplaces and a 1% decline in visits to ‘retail stores and recreation areas’, while OpenTable restaurant booking figures dropped by 2 percentage points.

Looking ahead, British banks are concerned that defaults on a wide range of loans will rise, according to a quarterly survey by the BoE, also published on Thursday.

That said, recent rates of default have been low, and concerns about big rises in default rates in previous surveys have not come to pass.

The survey also showed lenders intended to reduce the availability of mortgages by the most since the early days of the coronavirus pandemic in 2020.

“The anticipated pull back in credit availability reflects rising market interest rates rather than … criteria over which lenders have more control,” said Andrew Wishart, senior property economist at Capital Economics.

Financial markets expect the BoE to raise rates to at least 2% by the end of the year, up from 0.75% currently.