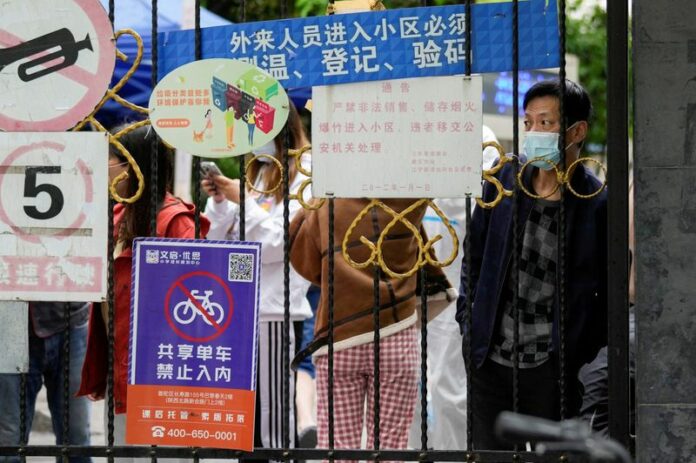 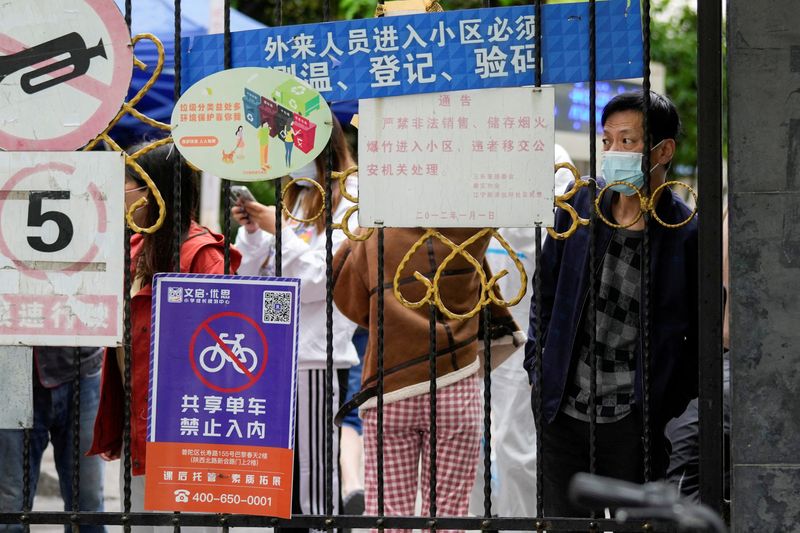 © Reuters. FILE PHOTO: A resident waiting for a food delivery looks out from behind a gate blocking an entrance to a residential area under lockdown amid the coronavirus disease (COVID-19) pandemic, in Shanghai, China April 13, 2022. REUTERS/Aly Song

BEIJING (Reuters) -China’s explicit call to cut the amount of cash banks set aside as reserves and boost lending has reinforced expectations for imminent policy easing, but economists say any credit loosening may not be enough to beat back the prospect of a deep economic downtrend.

Growth in the world’s second-largest economy has slowed since early 2021 as traditional engines of the economy such as real estate and consumption faltered. Exports, the last major growth driver, are also showing signs of fatigue.

More recently, widespread disruptions to activity from China’s biggest COVID-19 outbreak since 2020 and tough lockdowns have tilted the odds towards a recession, a few economists say.

On Wednesday, the State Council, or cabinet, said after a meeting that monetary policy tools – including cuts in banks’ reserve requirement ratios (RRRs) – should be used in a timely way.

In the last two rounds of RRR cuts in 2021, the respective announcements of the easing were made two to three days after they were flagged by the State Council.

“We expect the PBOC to deliver a 50-basis point RRR cut and potentially also an interest rate cut in the next few days,” Goldman Sachs (NYSE:GS) wrote in a note on Thursday.

Most private forecasters now expect an RRR cut of 50 basis points (bps), which would free up more than 1 trillion yuan ($157 billion) in long-term funds that banks can use to boost lending.

A commentary by state-run Securities Times said April 15 would be the window to watch.

China on Monday will report March data for industrial production and retail sales, which are expected to reflect the impact from COVID curbs, as well as first-quarter gross domestic product (GDP).

But some analysts cast doubt on the effectiveness of an RRR cut now, due to a lack of demand for credit, as factories and businesses struggle while consumers remain cautious in a very uncertain economy. [nL2N2VZ04K

Transmission channels for conventional RRR and rate cuts are severely clogged due to the COVID-related lockdowns and logistics disruptions, according to Nomura.

“When households scramble to stockpile food and private corporates prioritise survivorship over expansion, credit demand is weak,” Nomura analysts said in a note.

“With so many lockdowns, road barricades and property curbs, the most concerning issues lie mainly on the supply side, and merely adding loanable funds and slightly cutting lending rates are unlikely to effectively boost final demand.”

Nomura says China is facing a “rising risk of recession”, with as many as 45 cities now implementing either full or partial lockdowns, making up 26.4% of the country’s population and 40.3% of its GDP.

It expects one 10-bps rate cut each to the rates of the one-year medium-term lending facility (MLF), one-year and five-year loan prime rates (LPRs), and seven-day reverse repo in the near term.

But no change in the one-year MLF rate is expected when the central bank is set to renew 150 billion yuan of such medium-term loans on Friday, said 31 out of 45 traders and analysts in a Reuters poll.

Since a flurry of cuts to key rates in January, China has kept its benchmark one-year LPR unchanged at 3.70% and its five-year LPR steady at 4.60%.

“Monetary policy is not the panacea for all problems,” the Securities Times commentary said.

“Unblocking supply chains and industrial chains, allowing enterprises to get orders, and allowing people to have income would be the only way the cash-flow of the real economy be improved and a turnaround be achieved naturally.”