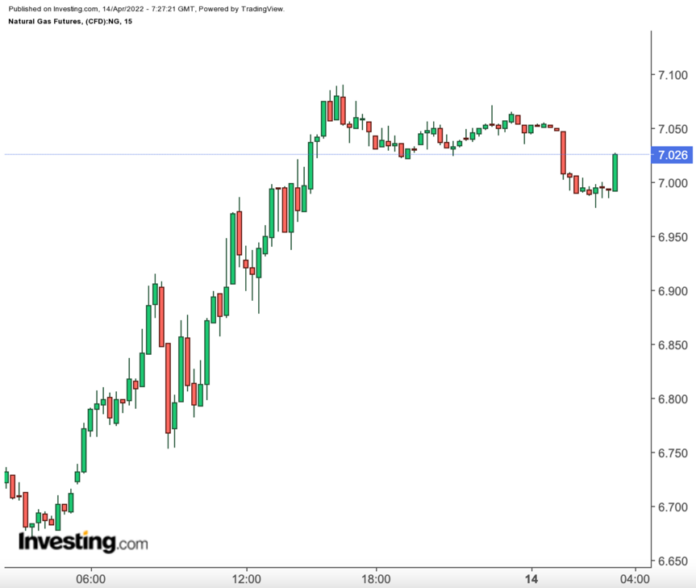 Natural Gas Prices: Will They Stop Before Hitting Double Digits?

Natural gas has pierced the much-anticipated $7 level, reaching its highest level since 2008. There’s no sign that the multi-week run is stopping soon, with some even hinting at double-digit pricing before it comes to a rest. The twin drivers of precariously low storage and unrelenting LNG demand, as well as a third, unexpected, leg up—colder-than-usual weather—have worked their magic for five weeks, delivering longs a cumulative gain of 50% since the week ended Mar. 4.

“Upside risk in the market remains high, and the front-month could very well break even higher before any form of relief is found,” Dan Myers, analyst at Houston-based gas markets consultancy Gelber & Associates, said in an email to the firm’s clients on Wednesday.

He added that the front month’s Relative Strength Indicator, a reliable measure of momentum, stood at 72, implying “ample potential for upside.”

In the previous week to Apr. 1, utilities pulled 33 bcf of gas from storage, in what analysts said was probably the last withdrawal of the winter heating season. The injection that analysts forecast for the week ended Apr. 8 would lift stockpiles to 1.397 trillion cubic feet, about 17.8% below the five-year average and 23.9% below the same week a year ago.

Last week’s storage build occurred as there were 89 heating degree days (HDDs) according to data from Refinitiv.

HDDs, used to estimate demand to heat homes and businesses, measure the number of degrees a day’s average temperature is below 65 Fahrenheit (18 Celsius).

US power generators burned about 24.6 billion cubic feet per day (bcfd) of gas last week, up from 24.3 bcfd in the prior week, according to Refinitiv. Traders cited a decline in nuclear power output last week.

Energy firms in the United States exported about 6 bcfd of gas to Mexico last week, up from 5.4 bcfd in the prior week, according to Refinitiv data.

In the case of Mexico-bound LNG, exports to the location grew by 0.8 bcfd as demand for natural gas ramped up with the approach of the summer peak demand.

But a nearly equal decrease in LNG exports, amounting to -0.7 bcfd, canceled out what would have been a sizable demand gain for the domestic market.

As a result, demand in the market increased by just about 0.1 bcfd. Supply, on the other hand, grew by about 0.6 bcfd, with domestic production increasing by 0.4 bcfd and higher Canadian imports contributing to the rest.

“Overall, the market did loosen somewhat (for the) week as supply gains overtook those of demand,” Gelber & Associates’ Myers wrote in his email.

Despite some warming from weather forecasts which decreased total natural gas demand over the next two weeks by about 7 bcf, the forecast for April still appears to be colder than average.

The overall April forecast is expected to reach at least 370 HDDs—a total higher than both the 10-year and 30-year averages, which sit at 352 and ~340 HDDs, respectively.

“Instead, the market may increasingly price in risks of …. reaching double digits—repricing the forward curve sharply higher into the summer.”

Bulls in gas have bought every price dip over the past four weeks, frustrating the bears, who have been waiting on production to increase given the higher price environment and increasing rig count. Output instead fell slightly midweek, according to estimates.

“The market has essentially been on a one-way train higher, regardless of day-to-day data changes, anyway,” Bespoke Weather Services said, reinforcing the comment by EBW’s Rubin.

“But this does keep alive the feeling that the path of least resistance remains to the upside.”

Bears have, meanwhile, been holding out hope for a prolonged period of unsupportive weather to improve supplies, “neither of which have occurred so far this shoulder season” between end-winter and mid-spring, NatGasWeather said in comments also carried by naturalgasintel.com