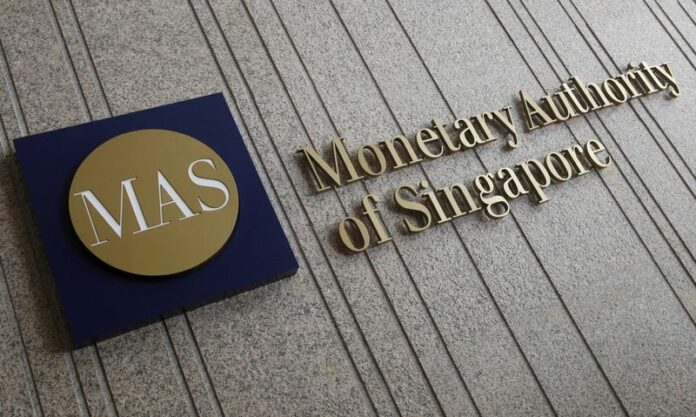 © Reuters. FILE PHOTO: The logo of the Monetary Authority of Singapore (MAS) is pictured at its building in Singapore in this February 21, 2013 file photo. REUTERS/Edgar Su

By Cynthia Kim and Aradhana Aravindan

SEOUL/SINGAPORE (Reuters) – Singapore and South Korea both tightened monetary policy on Thursday, hot on the heels of rate hikes in Canada and New Zealand, as global policymakers moved quickly to prevent soaring inflation from derailing a fragile world economic recovery.

Asia-Pacific economies largely lagged U.S. and European reopenings from the pandemic, which meant central banks in Australia, India and Southeast Asia had up until now mostly seen inflation pressures as transitory, with a focus more on shoring up their recoveries.

Singapore, South Korea and New Zealand were the exceptions and were particularly concerned about surging import price costs and financial stability more generally.

The Bank of Korea delivered a surprise quarter of a percentage point rate hike on Thursday.

Most economists had expected it to hold fire while it awaited the appointment of a new governor but with inflation in Asia’s fourth-largest economy running at a decade-high, the bank said waiting was not an option.

Singapore, meanwhile, tightened its policy, which influences its currency rather than interest rates, for the third time in six months, citing fresh risks from the Ukraine war.

Both meetings came less than a day after commodity-rich economies New Zealand and Canada lifted their respective rates by a hefty half a percentage point, their largest such hikes in two decades.

New Zealand’s hike was larger than what economists had expected and Canada warned more would be needed.

GET THERE FAST, TAKE IT SLOW

Vishnu Varathan, head of economics and strategy at Mizuho Bank, said Singapore, South Korea, New Zealand and Canada were part of a group that saw an urgent need to get ahead of the inflationary threat.

“The so-called ‘Kokomo Club’ of central banks that aim to ‘get there fast, and then take it slow’ necessarily are inclined to front-load tightening, with 50 basis point hikes as a hallmark,” Varathan said, referring to lyrics from the Beach Boys’ 1988 hit “Kokomo”.

While larger peers like the Federal Reserve and European Central Bank were not quite as aggressive in their posturing, he said they were moving in that direction.

The challenge for many economies is they have only just started to embed a sure-footed recovery from large pandemic-led downturns, though inflation has since forced their hands on concerns prices could trigger broader financial and price instability.

Indeed, even some of Asia’s less hawkish central banks are feeling the pressure to wind down their crisis-era policy.

The Reserve Bank of Australia last week held rates but dropped a reference in its communication about being “patient” in watching economic conditions.

Australia’s labour market remains extremely tight with unemployment at a 13-year low and markets now expect the first hike since the start of the pandemic in June.

India’s central bank also kept rates at a record low last week but flagged a move away from ultra-loose policy.

While the Ukraine war’s economic impact has mostly be seen in inflationary terms for now, with energy and food prices soaring, analysts warn policymakers need to pay close attention to the hit to growth.

Shane Oliver, head of investment strategy and chief economist at AMP (OTC:AMLTF) Capital in Sydney, compared current conditions with the Saudi oil embargo in 1973 that caused a global price shock.

“(Central banks are) having this dilemma that the longer this goes on, and it’s being going on for a year now, inflationary expectations move higher and inflation will become self-perpetuating much as it did in the 1970s,” he said.