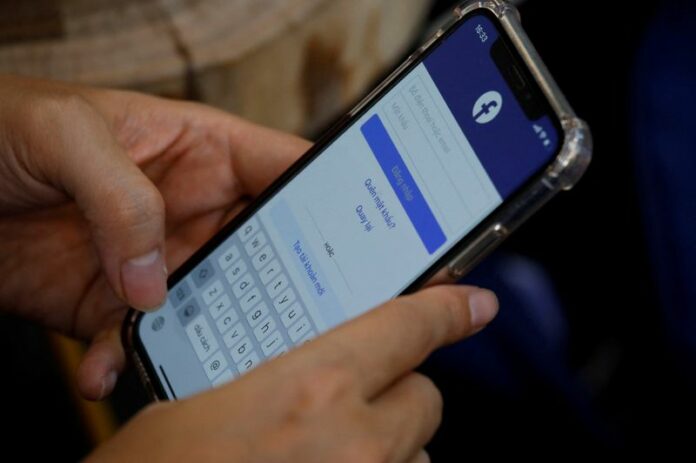 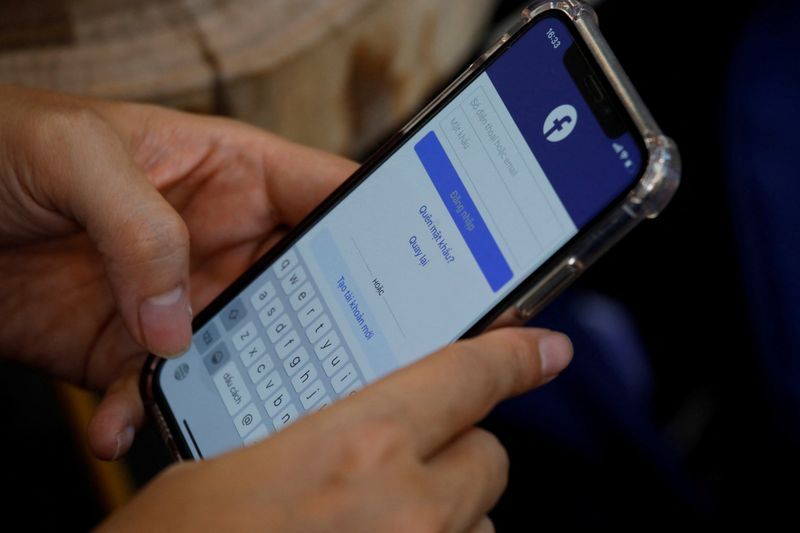 © Reuters. FILE PHOTO: A Facebook user logs in on his mobile at a cafe in Hanoi, Vietnam November 19, 2020. REUTERS/Kham/

By Phuong Nguyen and Fanny Potkin

The planned amendments to current law will cement Vietnam, a $1 billion market for Facebook (NASDAQ:FB), as one of the world’s most stringent regimes for social media firms and will strengthen the ruling Communist Party’s hand as it cracks down on “anti-state” activity.

The 24-hour time frame to take down “illegal content and services” will not have a grace period, while active “illegal livestreams” must be blocked within three hours, the people said. Companies that do not meet the deadlines could see their platforms banned in the country, they added.

Social media companies have also been told content that harms national security must be taken down immediately, according to two of the people and a third source.

Currently, social media platforms often have a few days to handle requests from the Vietnamese government, the sources said.

The amendments, which have not been made public, are expected to be signed by Prime Minister Pham Minh Chinh next month and enforced from July, five people said.

Sources who spoke with Reuters for this article declined to be identified due to the sensitivity of the issue.

Vietnam’s foreign ministry said amendments to law concerning online information are being reviewed by the government.

“Vietnam demands that businesses actively coordinate with the government in building a safe and healthy online environment, removing contents that are inappropriate or against legal regulations and national traditions of Vietnam,” it said in an emailed statement.

TikTok, which is owned by China’s ByteDance, will continue to comply with applicable local laws to ensure TikTok remains a safe space for creative expression, its Vietnam representative Nguyen Lam Thanh told Reuters, adding it would take down content that breaks platform guidelines.

Most governments do not have laws imposing the taking down of content on social media firms, but Vietnam’s move comes amid intensifying crackdowns in some parts of the world on online content that have alarmed activists.

India requires government requests to be met within 36 hours.

Vietnam, with a population of 98 million, is among Facebook’s top 10 markets by user numbers with 60-70 million people on the platform, according to 2021 company data.

The country generates around $1 billion in annual revenue for Facebook and is more profitable than many European markets, according to sources familiar with the matter.

YouTube has 60 million users in Vietnam and TikTok has 20 million, according to 2021 government estimates. Twitter is not as popular as most Vietnamese see it as an English forum.

But the market poses ethical quandaries. Vietnam’s Communist Party tolerates little criticism and the country’s courts have handed out lengthy jail terms to dissidents and activists for posts critical of the government on Facebook and YouTube.

Government efforts to exert control over online content have only intensified. A cybersecurity law introduced in 2019 was followed up by national guidelines on social media behaviour in June last year.

In 2020, Facebook agreed to significantly increase the censorship of “anti-state” posts for local users after Vietnamese authorities slowed traffic to its platform and threatened to shut it down entirely, company sources have previously told Reuters.

The planned changes stem from the government’s dissatisfaction with current take-down rates for its requests, the sources said.

The government is also keen to take down accounts of celebrities it believes are using their influence to sell unsuitable products, defame others and promote false charitable causes, they said.

Social media firms will have difficulty complying with take-down requests in 24 hours, the sources added.

They noted that while obvious infractions of their own company rules like depictions of extreme violence can be handled very quickly, other requests take longer to assess and finding qualified staff is a challenge.