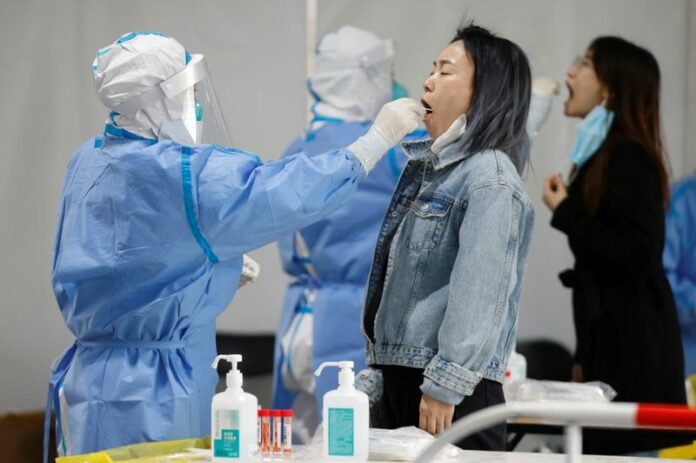 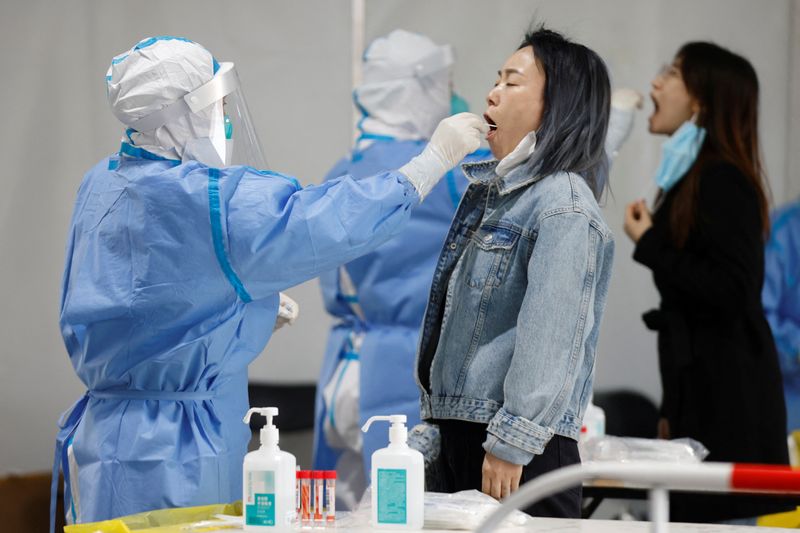 By Eduardo Baptista and Brenda Goh

BEIJING/SHANGHAI (Reuters) -Millions of people in Beijing took their second COVID-19 tests of the week on Wednesday as the Chinese capital tried to keep an outbreak numbering in the dozens from spiralling into a crisis like the one the locked-down city of Shanghai is enduring.

Evidence that Shanghai’s month-long isolation has become almost unbearable for many of the city’s 25 million people is emerging on an almost daily basis on the country’s heavily censored internet.

A widely circulated video – since taken down – showed a foreigner trying to break through metal barriers onto a Shanghai street, before being pulled back and dragged to the ground by four people in protective hazmat suits.

“I want to die,” the man shouted repeatedly in Chinese and English. One of the people holding him down responded: “You came to China, you need to respect the laws and regulations here.”

“Calm down, calm down,” says another. Reuters was unable to immediately verify the authenticity of the video.

Such distressing scenes are being watched with apprehension in Beijing, where officials hope early mass testing will spare them the anguish of Shanghai, where officials waited for about a month as cases surged before ordering city-wide screening.

In Beijing, supermarkets have kept supplies well-stocked under orders from authorities. Shi Wei, 53, a retiree, said he was encouraged by the capital’s low caseload but still nervous.

“These past two days every time I go to the supermarket there are lots of people, so I just turn around and leave, as I feel slightly unsafe,” he said. “I can understand the panic, given what happened in Shanghai.”

Geng, 31, who works in finance and only gave his surname, said he worried about being a close contact of a COVID case and being forced into quarantine with his whole family.

Beijing was testing the more than 3.5 million residents of its Chaoyang district on Wednesday, all of whom were screened on Monday. On Tuesday, 16 million from other districts were tested and are due for another round on Thursday.

In total, 20 million of Beijing’s 22 million will be tested three times this week.

Results for almost all samples from the first round came through on Wednesday afternoon, with 12 tubes of mixed samples showing positive, a Beijing health official said. Some 46 new cases have been identified since 4 p.m. on Tuesday, a second Beijing official said.

In mass testing in China, multiple samples are tested together in a single tube for speed and efficiency.

The coronavirus first emerged in the Chinese city of Wuhan in late 2019 and authorities managed to keep outbreaks largely under control with lockdowns and travel bans. But the fast-spreading Omicron variant has tested China’s “zero-COVID” policy.

Shanghai has been offered a glimmer of hope with officials reiterating that they would soon begin easing restrictions in districts that have stamped out infections, without giving a time frame or other details.

In the meantime, most people are confined to their homes. Even those who can go out have few options, with most shops and other venues closed.

Data showed six of Shanghai’s 16 districts had zero cases outside quarantined areas, with numbers in seven others in the single digits. In total, Shanghai detected 171 such cases on Tuesday, down from Monday’s 217.

Shanghai reported 48 new deaths on Tuesday, down from 52 the day before, taking the city’s official death tally since April 17 to 238.

China’s zero tolerance policy has provoked rare public anger in an important year for President Xi Jinping, over measures that look increasingly bizarre to much of the outside world that has chosen “live with COVID”, even as infections spread.

Xi is widely expected to seek a third leadership term this year.

Research by Gavekal Dragonomics estimated that 57 of China’s 100 biggest cities were under some form of COVID curbs as of last week.

Hundreds of factories have been allowed to resume operations, with state media giving plenty of coverage of the reopening of Tesla (NASDAQ:TSLA)’s Shanghai plant last week.

But industry associations say most factories are struggling to get back to work with staff stuck at home, trucks parked in lots, and orders of components from contractors in the same situation unfilled.

Many frustrated bankers, traders and investors confined to their homes say they are considering moving to other financial centres.