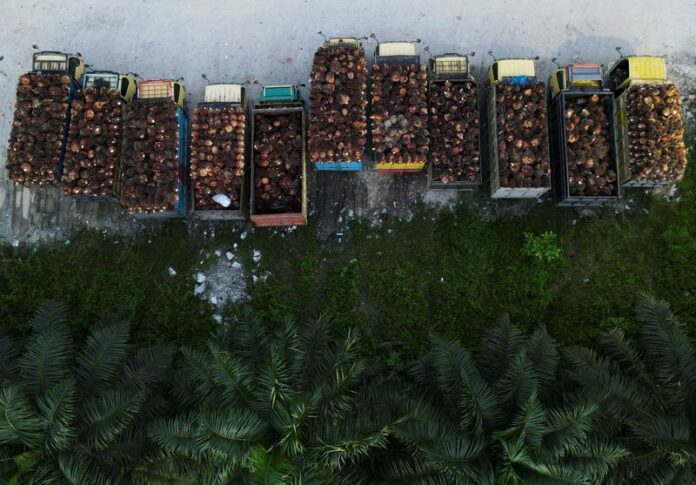 MUMBAI (Reuters) – Indonesia’s wider palm oil export ban has trapped at least 290,000 tonnes of the edible oil meant to be headed to India at ports and oil mills in the world’s top producer, four industry officials told Reuters on Thursday.

The disruption in shipments after Indonesia widened its export ban to include crude and refined palm oil will create a vegetable oil shortage in top importer India, the officials said. Second-biggest exporter Malaysia is already struggling to meet higher demand levels and is asking for near record prices for prompt shipments, they said.

“Our vessel of 16,000 tonnes is stuck at Kumai port in Indonesia,” said Pradeep Chowdhry, managing director of Gemini Edibles & Fats India Pvt Ltd, which buys around 30,000 tonnes of Indonesian palm oil every month.

“We don’t know when Indonesia will lift the ban, and stuck shipments will be delivered.”

India is the world’s biggest importer of palm oil and relies on Indonesia for nearly half of the 700,000 tonnes it takes in every month.

Malaysian sellers are obliged to meet their old commitments and cannot provide palm oil for prompt shipments, he said.

India meets nearly two-third of its vegetable oil demand from imports. New Delhi was banking on palm oil after sunflower oil supplies from top exporter Ukraine were halted because of what Russia calls its “special operation” in the country.

Palm oil was trading at a hefty discount to soyoil and sunflower oil earlier this month, and this prompted Indian buyers to increase palm oil purchases for loading in May, said a Mumbai-based dealer with a global trading firm.

“That quantity is now stuck because of Indonesia’s surprise move,” he said.

Black Sea countries account for 60% of world sunflower oil output and 76% of exports, while Indonesia and Malaysia account for the bulk of global palm oil shipments. Argentina, Brazil and the United States are key soyoil suppliers.

“There would be shortage in the market. There is no way to increase supplies,” said Govindbhai Patel, managing director of trading firm G.G. Patel & Nikhil Research Company.

Limited supplies amid robust demand next month because of weddings and festivals could lift prices in India, Patel said.