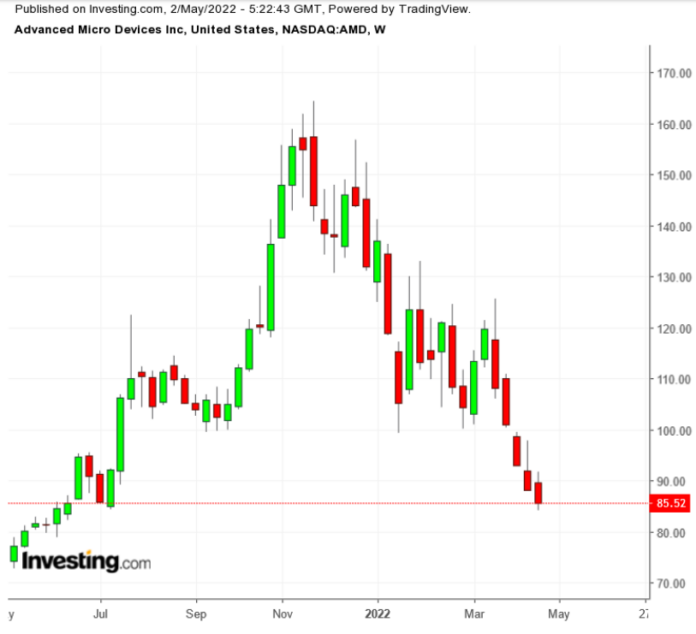 When Advanced Micro Devices (NASDAQ:AMD) releases its latest quarterly earnings on Tuesday, after the close, the chipmaker may again show robust demand for its products which are used in data centers, cell phones, and gaming consoles. The Santa Clara, California-based AMD reported in February that its first quarter sales will be better than what Wall Street estimated at that time.

Indeed, after the high double-digit sales expansion during the past two years, AMD is reaching a level of profitability nearly identical to arch-rival Intel (NASDAQ:INTC)—something that would have been inconceivable just a few years ago. Still, despite producing stellar quarterly growth figures for a number of quarters in a row, investors have shunned AMD stock this year. Shares, which closed on Friday at $85.52, are down more than 40% this year, making AMD one of the worst-performing chip stocks.

This divergence between growth and the stock performance shows that investors don’t see a rosy future for the industry going forward, given rapidly increasing interest rates and inflationary pressures which are clearly not transient.

The chip sector belongs to those segments of the economy that are considered highly cyclical. Historically, the industry generally ends up managing a high level of inventories whenever the global economy slips into a recession.

The Philadelphia Semiconductor Index, often referred to as the SOX, has shed about 25% gains this year after accelerating at least 40% in each of the past three years. The decline has wiped out more than $750 billion in market value.

That downturn comes as a number of economists believe it will be tough for the Federal Reserve to avoid a recession if it raises interest rates too aggressively. According to Goldman Sachs, the central bank will face a difficult task in tightening monetary policy enough to cool inflation without causing a US recession, with the odds of a contraction at about 35% over the next two years.

Yet, AMD’s rapidly expanding market share and its track record of exceeding expectations have prompted some analysts to advise clients to take advantage of this weakness. Of 40 analysts polled by Investing.com, 24 have a “buy” rating on the stock, while 15 are “neutral.” Raymond James in a note last week upgraded AMD to a strong buy and increased its price target to $160, saying:

“As we have become more concerned about cycle risks given potential for slowing consumer demand and elevated inventory levels at customers, we favor those semi companies with strong secular drivers, more muted cyclical exposure and attractive valuations, for which AMD appears well positioned.”

The note also said AMD will continue to provide tough competition for Intel which is struggling to ramp up its production.

“With INTC’s roadmap not showing parity with AMD until at least the end of 2024, we think continued share gains for AMD in datacenter are likely inevitable, and we believe tight supply conditions are encouraging customers to commit to AMD to ensure supply.”

The pullback in AMD shares could be a buying opportunity for long-term investors as the company continues to report robust earnings, providing a solid reason to remain bullish about its growth prospects going forward.

Interested in finding your next great stock idea? InvestingPro gives you the chance to screen through 135K+ stocks to find the fastest growing or most undervalued stocks in the world, with professional data, tools, and insights. Learn More »