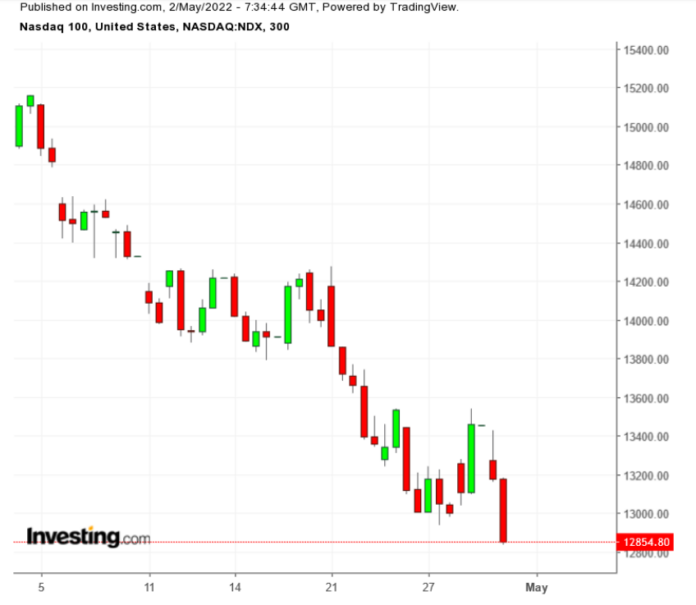 When April trading started, investors may have harbored some hope that the new month wouldn’t be as wild as March had been.

And indeed, it wasn’t. It might have been worse. April—normally one of the best months for stocks—was a misery for investors.

The NASDAQ Composite Index fell 13.3%, its worst performance since October 2008. The Dow Jones Industrial Average and the S&P 500 Index both suffered their worst monthly performances since March 2020, when the COVID-19 virus first struck worldwide.

As Marketwatch.com noted, the Dow and the S&P 500 each suffered their largest percentage declines for an April since April 1970.

The drubbing equities took in April left the Dow off 9.3% for the year, while the NASDAQ fell 21.2%. In the aftermath of April’s lousy finish, an investor would be within his or her rights to ask if the worst is over. That’s not clear.

The headwinds markets continue to face in 2022:

The biggest inflationary upsurge since the early 1980s: U.S. prices have been rising at an 8.5% clip annually as economies everywhere struggle to match rapidly rising demand against supply constraints such as no ships, freight cars and trucks. West Texas intermediate crude oil, the U.S. benchmark, finished Friday at $104.69 a barrel, up 4.4% for April and up 39.2% for the year.

The Federal Reserve’s vow to tame the inflationary beast: The Fed’s rate-making committee meets this week and, on Wednesday, is expected to boost its key rate a half percentage point. It will also signal more rate increases ahead over the rest of 2022 and into 2023.

The Ukraine-Russia war: The Russian invasion of Ukraine on Feb. 24 has killed thousands of civilians and troops on both sides and forced around five million Ukrainians to flee their homeland. The incursion has wrecked Ukraine’s economy and fractured Russia’s. As important, the war has disrupted global grain trading patterns. Russia and Ukraine export about a quarter of the world’s wheat, prompting worries about food prices. Wheat is up some 40% this year alone. (But crop consultant Sarah Taber, writing on Foreign Policy.com, notes there’s no shortage— “we simply have enough wheat when we’re used to silo-busting gluts.”)

The ongoing COVID-19 threat: The situation is better than in 2020 when there was so little knowledge about the virus and its variants. Vaccines are increasingly available that minimize hospitalizations.

But even if the headwinds could be overcome, it takes time for markets to recover their losses. In the market’s favor: the U.S. economy is solid, and interest rates, while rising, are quiet compared with the high rates seen in the 1970s and 1980s.

The stock market’s April battering (as well as for year to date) was broad and tough to avoid. Just one of the 11 S&P 500 sectors showed a gain for the month: consumer staples. Amazon stunned Wall Street on Thursday by reporting a rare quarterly loss of 23.8%.

The stock fell 14% on Friday alone, its biggest one-day drop since July 2006. Revenue growth has been slowing, and the internet retail company wrote down part of its 18% stake in Rivian Automotive (NASDAQ:RIVN), the maker of electric trucks and sport utility vehicles. Rivian shares fell nearly 40% in the month and are off about 71% this year.

And, of course, streaming entertainment giant Netflix (NASDAQ:NFLX) slumped 49% for the month after the company announced a loss of 200,000 subscribers in the first quarter and warned it may lose another two million subscribers in the second quarter.

The Netflix debacle hurt Walt Disney (NYSE:DIS) shares, whose Disney+ streaming service is growing but isn’t profitable. Disney stock fell 18.6% in April, second-worst among Dow stocks. The House of Mouse’s stock is also down 28% for the year. Worse, the shares are off 45% from their peak in March 2021.

Plus, streaming entertainment is struggling to justify itself. CNN spent $300 million developing CNN Plus as a streaming platform. But its new owners, Warner Brothers Discovery (NASDAQ:WBD), killed the service almost immediately because of woefully weak signups. Shares of WBD fell 27% as a result.

Even shares of Apple (NASDAQ:AAPL) and Microsoft (NASDAQ:MSFT) couldn’t avoid being dragged lower. Apple was off 9.7% for the month; Microsoft fell 10%. But both retained market caps of more than $2 trillion. It was the second-worst performer for the month among S&P 500 stocks.

Despite a 2.91% loss in April, Occidental Petroleum (NYSE:OXY) is still the top-performing S&P stock for the year, up 9%.

Rising interest rates were a common denominator in pulling stocks down. The widely watched 10-year Treasury yield started the year at just above 1.5% and ended April at 2.887%. That’s up about 80%. The move higher started after the Fed announced it would no longer pour money into the banking system to keep the U.S. economy afloat. (Central banks around the world made similar moves.)

So far, the rising rate environment has not disrupted economies overall.

Rising interest rates will push bonds and stock prices lower and could weigh on the most vulnerable companies—those carrying lots of variable-rate debt or, like startup biotechs, desperate for continuing infusions of cash to keep the doors open.

Higher rates may be starting to weigh on the U.S. housing market.

Mortgage rates have been quietly rising in the background, says Freddie Mac (OTC:FMCC), the Federal Home Loan Mortgage Corporation, one of the two biggest suppliers of mortgage money to lenders.

Let’s end with the question of a bottom. Has one been reached?

A host of technical indicators are very bearish: The indicators, including relative strength indexes and MACD, still suggest the market is in a strong selling mode. An RSI that breaks decisively under thirty is a signal a bottom is at hand. As of Friday, the S&P 500, the Dow, the NASDAQ, the NASDAQ 100 and the Russell 2000 are all around 34 to 35. (You can see the technical indicators for the S&P 500 here.)

The Russia-Ukraine war needs to stop: The establishment and maintenance of stable borders would be positive. One does not want the war to extend into, say, Poland or the Baltic states.

Additional evidence of easing global supply-chain problems: There are fewer than 40 ships waiting to be unloaded in Los Angeles, down from more than 100 in earlier this year, according to Supply Chain Brain, a logistics report.

In the end, one must wait for the Fed: The central bank’s goal is to cool off the economy’s inflation enough without causing a recession. At best, that’s a delicate and complex challenge. That may also be why stocks are getting so smacked around.

But a bottom will come. It just might take more time and patience.