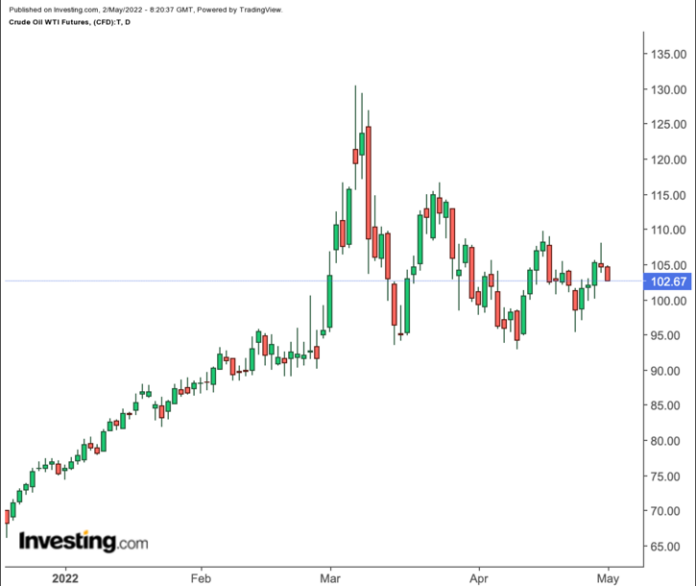 In one of the most intense weeks for markets, the Federal Reserve and OPEC+ will both be on the radar of commodity investors, setting gold and oil prices up for a particularly turbulent time, with the central bank and the global oil producing alliance out to achieve very different aims. The Fed is likely to impose a 50-basis, or half-percentage, point rate hike at the conclusion of its May policy meeting on Wednesday—its first hike of such magnitude in over 20 years—as it aims to quell the worst inflation in four decades. Gold plunged even before the start of the official session in New York on Monday, falling more than 1% in Asian trading, into deeper $1,800 territory as the dollar—the yellow metal’s key rival and chief beneficiary of US rate hikes—soared along with bond yields led by the US 10-year Treasury note.

Oil also tumbled in the Asian session starting the week, with Brent, the global oil benchmark, and US West Texas Intermediate, the gauge for US crude, losing as much 1% in holiday-sapped trade as the Muslim religious festival Eid and other holidays shuttered markets on that side of the world.

Oil’s drop was more on concerns about slowing economic growth in China, the world’s top oil importer, although worries over the Fed rate move could also weigh on crude later in the week, especially if fears of a US recession accelerate.

In what is likely to be its biggest rate hike since May 2000, the Fed seeks to clamp down particularly on spiraling wages and demand for workers—the two major culprits of current price pressures, at least according to the central bank.

Higher interest rates are the Fed’s go-to mechanism for tackling inflation, as they make the cost of borrowing or investing more expensive, and can put a damper on spending by both households and businesses. If companies decide they don’t need as many employees, then the current high demand for workers could also ease up.

Fed Chairman Jerome Powell argues that a steady series of seven rate hikes this year can not only bring down soaring inflation, but can also help reset the job market by cooling off demand for labor.

Both the US economy and inflation expanded at their fastest pace in four decades in 2021 while jobs growth hit record highs. The last two have continued growing without a blip while the economy is already slowing.

Economists say the Fed’s plan of downing inflation and spiraling inflation while providing a soft landing for the economy—all at the same time—will be extremely difficult to pull off, given the uncertainty of the post-pandemic world.

Russia’s invasion of Ukraine has roiled global energy markets, with the widespread expectation that American households will feel the sting at the gas pump. Recent COVID shutdowns at major Chinese manufacturing hubs have also renewed global supply chain woes, and offer a sobering reminder of the pandemic’s ongoing economic threat.

Since 1961, the Fed has launched nine full cycles of rate hikes to combat inflation. Recessions followed eight of those tries, according to research from the investment bank Piper Sandler.

And giving new impetus to that history, the first quarter of 2022 has already seen a 1.4% contraction in US GDP. That came after a phenomenal 5.7% jump in 2021 as the economy rebounded from the COVID ravages of 2020 that caused a 3.5% GDP decline that year, leaving the US with the first recession since 2008/09.

For another recession—which is defined as two straight quarters or more of GDP decline—the US needs to see the slowdown extend through June.

High oil prices can hurt economic growth but not, necessarily, a job market like the one in the US now. But a slowdown in jobs growth, or worse, a sharp spike in employment—just like two years ago, at the height of the coronavirus breakout—will almost certainly drive crude prices lower.

Any impact might not be felt right away and probably not this week, when the Fed meeting is just a day before that of OPEC+, the global oil producing alliance whose job more than ensuring the stability of crude supply to the world is to ensure that a barrel stays at above $100.

Just like the Fed is determined to break the back of the US inflation, OPEC+ is determined that oil prices never again see the lows of COVID 2020. These are the dynamics we have to keep in mind as the Fed isn’t going to be able to reduce inflation without getting oil prices down—wage spiral and demand for workers being just one part of the problem—and OPEC+ isn’t going to roll over and play dead while the central bank and the combined forces of the Biden administration try to take an axe to the oil market.

While US crude is likely to retest last week’s support areas of the $101 – $98, buyers may also surface at that point to resume the main bullish momentum aiming for the $105 – $108 resistance and liquidity areas, Dixit of skcharting said. Adding:

Also, if push comes to shove, OPEC+ will keep squeezing crude production to ensure prices don’t fall too far from where they are.

With the advent of summer air travel and US road trips just around the corner, it might be hard to keep oil below $100 a barrel as much as it might be difficult to prevent it from testing the highs of Ukraine invasion, which was almost $140.